The actress astonishes in two roles in Joanna Hogg’s haunting film set in a creaky castle in Wales. 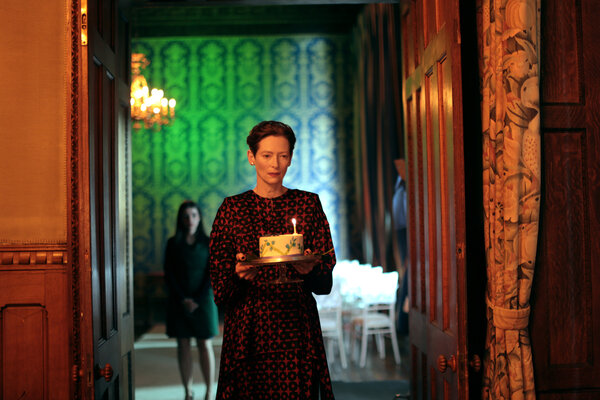 “The Eternal Daughter,” a lovely and haunted dream of a movie from the director of “The Souvenir,” opens on a spectral scene at dusk. On a desolate country road shrouded in fog and bordered by bare trees, sounds of the wind and lonely music drift on the soundtrack as spindly branches reach across the frame like fingers. By the time taxi headlights pierce the fog, your head may be churning with thoughts of ghosts and fanged demons, the kind that emerge from the shadows in old horror films to trouble your sleep.

I imagine that the British filmmaker Joanna Hogg has a passing acquaintance with some of those movies, even if her work is rarefied enough to constitute its own auteurist genre. “The Souvenir,” which brought Hogg a wider audience, is a memory piece about a young woman’s devastating first love. The tragedy is crushingly sad, even if its conclusion is foregone. What gives it and other of Hogg’s movies their power aren’t their stories per se but her distinctive style and how she elicits meaning with emotional intimacy and intellectual reserve, creating realism from silences, gazes and rooms that become worlds.

There are two women passengers in the taxi, a middle-aged filmmaker, Julie, and her mother, Rosalind, along with the mother’s dog, Louis, a soulful springer spaniel. The women are striking, dressed in understated clothing that quietly announces their privileged station before either speaks a word. Julie is talking to the driver while Rosalind seems to be sleeping, a gloved hand resting on Louis. Julie’s hair is auburn, her face pale and lightly creased, while Rosalind seems washed in gray. They make a vivid, arresting pair, all the more so because both characters are played by an astonishing Tilda Swinton.

Julie and Rosalind are in Wales for a brief visit. They’re staying in a rambling hotel, an imposing, 18th-century mansion topped with gables and stone heraldic beasts. There are different reasons that mother and daughter are traveling together, including nearby relations, an impending birthday and a potential film project. As Julie explains later, during a conversation with a sympathetic caretaker, Bill (Joseph Mydell), one of the few other people around, she has come to the hotel to try and write a film about her and her mother. But she’s having trouble getting started. “I’m not sure that I feel I have a right to do such a thing.”

Not much happens at first beyond Julie’s amusingly testy, politely antagonistic exchange at check-in with the hotel receptionist (a dryly funny Carly-Sophia Davies). The women settle into their room, a cozy double lined with toile wallpaper and furnished with separate beds and some strategically placed mirrors that Hogg soon has wicked fun with. Mother and daughter are close, though Julie’s doting on Rosalind isn’t always welcome. Rosalind spends a lot of time in bed; she also seems untroubled by the mansion’s eerie noises, its spooky gloom and the loud rhythmic banging that keeps Julie up at night.

Given Hogg’s interest in memory and her expressionistic use of space it was perhaps inevitable that she’d make a ghost story, though “The Eternal Daughter” doesn’t as much conform to the genre template as playfully nip at its edges. It’s not for nothing that the first words you hear are “well, there was something strange….” Yet while Hogg comes at genre obliquely, she also makes great use of horror’s greatest hits by deploying creaking doors, billowing curtains and ominous shadows. And then there’s the pale-gray face at a window that Julie sees at night while out walking the dog.

The mother and daughter, their differences, similarities, tenderness and love are the story, which Hogg fills in with chatter, reminiscences, precise details, private rituals and lingering looks. You see how Julie methodically, and with a hint of odd urgency, unpacks her luggage, and how Rosalind daintily removes a tablet from a pillbox. And while you may shriek in mock-horror at some mother-daughter passive-aggression — “What do you think, Mum?” Julie asks of Rosalind, who answers “What do you think?” — Hogg doesn’t peel away the character’s psychological layers. Their mysteries, as she will tenderly reveal, lie elsewhere.

Notable effort has gone into visually distinguishing Julie and Rosalind beyond just their hair and clothes, including the use of some discreet makeup and careful lensing. Even so, the characters look more conspicuously alike than not, a resemblance that underlines their bonds, familial and otherwise, even as it evokes the figure of the doppelgänger, another horror staple. In classic examples, the doppelgänger serves as a sinister, even monstrous double (Dr. Jekyll, meet Mr. Hyde). Here, the doubling can be subtle, but it does suggest that there are alternative realities in play, an idea that Hogg conveys early on with some clever, destabilizing mirrored images — something definitely weird this way comes.

Hogg’s greatest stroke in “The Eternal Daughter” is her casting of Swinton in both lead roles. Swinton is a wonderful chameleon and while she can go as big and showy as any Oscar contender, she is also a brilliant miniaturist. Swinton gives Julie and Rosalind fine-grained differences, individual gestures and gaits, puts elasticity into Julie’s voice and a light huskiness in Rosalind’s. Julie is more robust than her mother, and her expressions are bigger, too, more animated. Julie seems outwardly directed while Rosalind — with her still and watchful gaze — seems in retreat, as if she’d begun collapsing inward.

The effect can be uncanny, particularly when mother and daughter are face to face at dinner. Hogg shows off the room at one point, the camera panning over the museological furnishings, but for the dinner sequences she primarily shoots Julia and Rosalind in individual medium close up, cutting back and forth between them. This allows you to see the warmth between the women, how they spark off each other, and to fully absorb their differences — the eagerness in one face, the exhaustion in the other. It’s like looking at two stages of the moon, one waxing and the other waning. And, if you’re wondering where the ghost is, let me whisper a clue: Nothing haunts us as deeply, as memorably, as love.