Continuing in the tradition of the Karate Kid franchise, Cobra Kai delivers on what it does best: fight scenes. And season 3, which is now streaming on Netflix, didn’t fail on that front. In fact, it topped the first two seasons with even more epic battles between the students as well as the adults, who do their best to keep up with the younger generation.

Speaking of, the younger stars — Mary Mouser (Samantha LaRusso), Peyton List (Tory Nichols), Jacob Bertrand (Eli Hawk Moskowitz), and Xolo Maridueña (Miguel Diaz) — open up to ET about training for season 3 and living up to high expectations now that the series is such a huge hit on the streaming platform.

“This whole Karate Kid fandom and everything else has been — they’re so embracing and so cool and it’s been great to be a part of,” List says of the continued support of the franchise, especially after the series made its leap from YouTube to Netflix. “I remember driving in the car and I think it was my parents calling me and being like, ‘Did you know that Cobra Kai is trending right now on Netflix?’”

She adds, “It feels like we have this huge support, and it’s really giving me a lot to look forward to and, like, something to be proud of throughout this time, and I’m really grateful for it.”

Bertrand agrees. “I love this opportunity of being a part of, you know, the Karate Kid universe,” he says. “It is really cool going from YouTube to Netflix and seeing the spike and everyone talking about the show. It is awesome, I could not ask for anything else.” 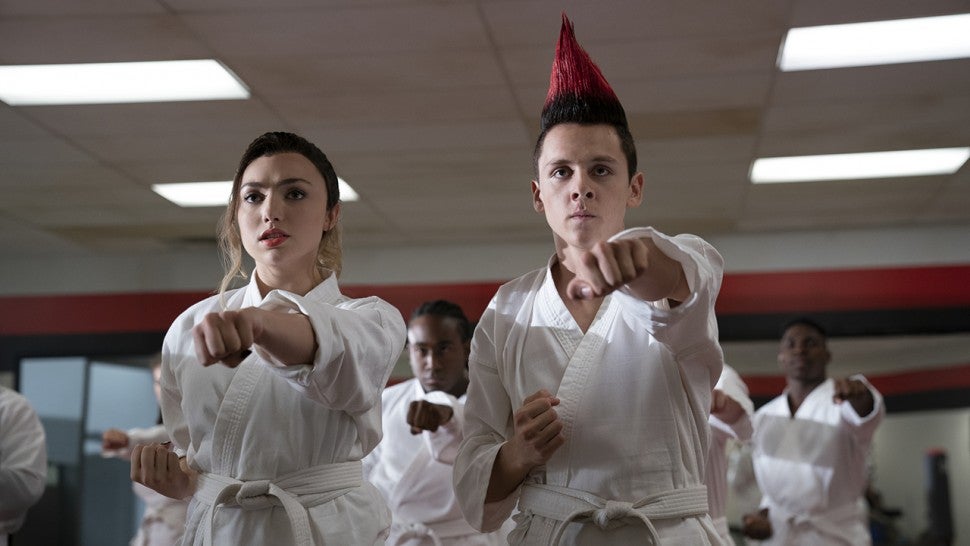 And a big reason why the fans are so dedicated to the show is that the cast clearly puts in their all when it comes to bringing to life the world of karate onscreen, especially in season 3’s show-stopping finale, which sees John Kreese’s followers leading a brutal attack on Daniel LaRusso and Johnny Lawrence’s students.

“The final cut is definitely super dope to see, and I guess being there on the day it was shot, it’s crazy to think [about],” Maridueña says, looking back. “It was filmed so long ago. Like, over a year ago!”

“We had all the stunt doubles, all the stunt coordinators, all the actors together,” List says of coming together to pull off those fight scenes. “It was a huge rehearsal. I mean, just in terms of the amount of people. We get hours to train and everything else [but] I never feel fully ready until I’m there in the moment. I’m like, ‘All right, you gotta go for it and just commit.’”

Mouser adds that the anticipation building up to filming episode 10 was intense. “All season, you’re like, ‘Yeah, we’re gonna start rehearsing episode 10. Yeah, I read that script. It looks really good. I’m excited to see that come to life,’” she quips. “And then you get your rehearsal for the first time and you’re like, ‘Oh crap! I’ve got two days to be able to pull this off!’”

Bertrand, meanwhile, reveals the secret to pulling everything off is stretching. “So much of it is stretching, you know? We’ll sit on a wall and put our legs up, and they’ll come — the synchronators will come by and just stretch your legs out ‘cause you gotta kick somebody in the face, you gotta get your leg up there!” he says, adding that “working through the choreography and making sure everyone has it down, especially for a fight like the episode 10 fight, where there’s a ton of moving pieces” was essential.

He adds, “Everyone has to be as dialed in as they can. There’s a lot of crazy stuff that happens in that episode 10 fight that I’m really excited for people to watch. Very intense!”

As for the final result? Maridueña says, “It’s exactly how we imagined it. I know that Hido and Janelle, our stunt coordinators, are super proud of it.”

“As we move on to these next seasons — you know, we have season 4 coming up, obviously, and hopefully more seasons after that — but I know that if we stay with Hido and Janelle, the bar’s just gonna get topped each time,” Maridueña concludes.

Related posts:
Barcelona presidential candidate Victor Font vows to bring in club legend Xavi as general manager if he is elected
Punters pay tribute to fan favourite Don Poli as ex-Gordon Elliott and Dan Skelton stayer retired at age of 11
Popular News
Israel gave me a COVID-19 vaccine before the US got to my elderly parents
23/01/2021
Man Utd wonderkid Ramon Calliste, called ‘the next Giggs’, now owns luxury watch business and makes £5m a year – The Sun
26/03/2020
Megan Thee Stallion Addresses Criticism Over Twerking: ‘I Love to Shake My A**’
26/03/2020
Police guard shops to stop coronavirus panic-buyers and enforce social distancing – The Sun
26/03/2020
Coronavirus: Good Morning Britain’s Dr Hilary reveals ‘game-changing’ self-testing kit
26/03/2020
Recent Posts
This website uses cookies to improve your user experience and to provide you with advertisements that are relevant to your interests. By continuing to browse the site you are agreeing to our use of cookies.Ok