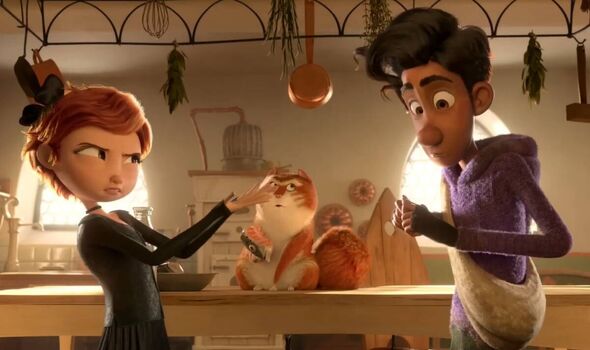 We’re somewhere in medieval Europe where a talking con-artist cat called Maurice, voiced by Hugh Laurie, is cashing in on the bubonic plague with the help of a pack of enchanted rats and a gormless lad called Keith (Himesh Patel).

After his rodent pals run loudly through a village, ginger swindler Maurice pops up offering to bring in the Pied Piper – for a hefty fee.

The jingle of gold coins is the cue for a flute-playing, hoodie-wearing Keith to appear. He then showily leads the rats to a spot where they can regroup and plan their next grift.

It’s all going rather well until Maurice and his gang come unstuck in a village called Furry Bottom.

The voice cast is littered with British stars. David Thewlis plays a mysterious villain, Rob Brydon is the real Pied Piper, David Tennant and Gemma Arterton are amusing rats, and Hugh Bonneville is a bumbling mayor.

Peter Serafinowicz has a brief cameo voicing Death who appears whenever Maurice loses one of his nine lives.

In one of the film’s many quirky asides, he appears to a deceased rat with a rodent-specific sidekick called The Grim Squeaker.

These jokes should keep grown-ups watching. But I wonder what younger children will make of it all.

Emilia Clarke voices both the story’s narrator and its plucky heroine but she keeps breaking the fourth wall.

Her arch commentaries about screenwriting clichés won’t enchant many little ones.