The 2020 Emmys, Reviewed: A Streamlined, Awkward First Night of the Creative Arts Awards

If you ever wondered what an awards show would look like without all the frivolous time fillers, wonder no more. The 2020 Emmys kicked off Monday night with its first of six virtual ceremonies, and this initial streamlined affair — with pre-taped intros, speeches, and other segments — featured no red carpet, no long walks to the stage, and no flustered, rambling, “Oh, I forgot to thank–” speeches.

To be fair, the Creative Arts Emmys usually aren’t charged with putting on a show. With so many categories, these ceremonies are primarily focused on getting all the awards handed out, and that’s about it. So finding a fitting way to honor this year’s TV craft achievements without two nights of free dinners and small parties was going to be tricky. The TV Academy could’ve just released the winners via a press release, a la the nominations, and they likely wouldn’t have faced much backlash outside the industry. There’s simply not a huge appetite to watch six nights of TV awards, so the choice to put together virtual, pre-taped, live-streaming ceremonies was a thoughtful gesture and significant investment (of time, production resources, and talent) by the TV Academy. They also offer the added bonus of serving as trial runs for the weekend’s grander festivities, where more people will be watching (one hopes) and more famous folks will be honored (for sure).

But that doesn’t mean it should feel like a trial run. To its credit, the Reality and Non-Fiction section of the Creative Arts Emmy Awards wrapped in less than an hour — an unthinkable feat for any prior awards show — when amiable host Nicole Byer gave her sign-off at 5:55 p.m. PT. But the rapid rate of announcements, combined with the flavorless pre-taped segments, only emphasized the idea that TV Academy technicians just wanted to make sure this whole virtual ceremony thing worked, more than it felt like an opportunity for winners to be singled out, heard, and appreciated.

Does that mean the next five nights are doomed? Not at all! Could there be more ambitious, organic, or otherwise compelling moments in store? You bet! So will viewers come back tomorrow night (and more importantly, tune in for Saturday’s longer FXX airing and Sunday’s big Primetime show)? Well, we’ll see. Here are a few first impressions of the weird debut — for those who missed it, and for those who are thinking about watching later on.

A Quick Ceremony, for Better or Worse

Whoever decided to cap these Creative Arts shows at an hour apiece deserves a medal for courage… if not foresight. Reading previews that claimed each of these first four ceremonies would be over and done in less than 60 minutes made my jaw drop, and few of my fellow viewers believed it was possible until we’d mowed through three-quarters of the categories in 45 minutes.

And yet, the speed ended up working against the special feeling these prestigious awards are supposed to evoke. Don’t get me wrong: A long awards show is tough to sit through, and a short awards show is usually a sign of exquisite planning (and a few lucky breaks). Finding the perfect length for all viewers is an errand so foolish critics should be banned from complaining about award show runtimes.

Still, it’s a big factor this year. The virtual world still can’t compare to the remarkable nature of live, in-person events, so virtual ceremonies are fighting an uphill battle when it comes to making these honors feel as significant as prior years’. Watching winner after winner fly by, with speeches starting as soon as the announcement screen slid away, I couldn’t help but think of past Emmy parties, when someone unknown was announced as the winner, the camera cut to their face, and the people watching stopped chatting or eating or making a cocktail to ask, “Wait, who just won?” That brief exchange usually took place as the recipient walked to the stage, and people would listen to the start of their speech once they understood who they were or, more likely, what they worked on. 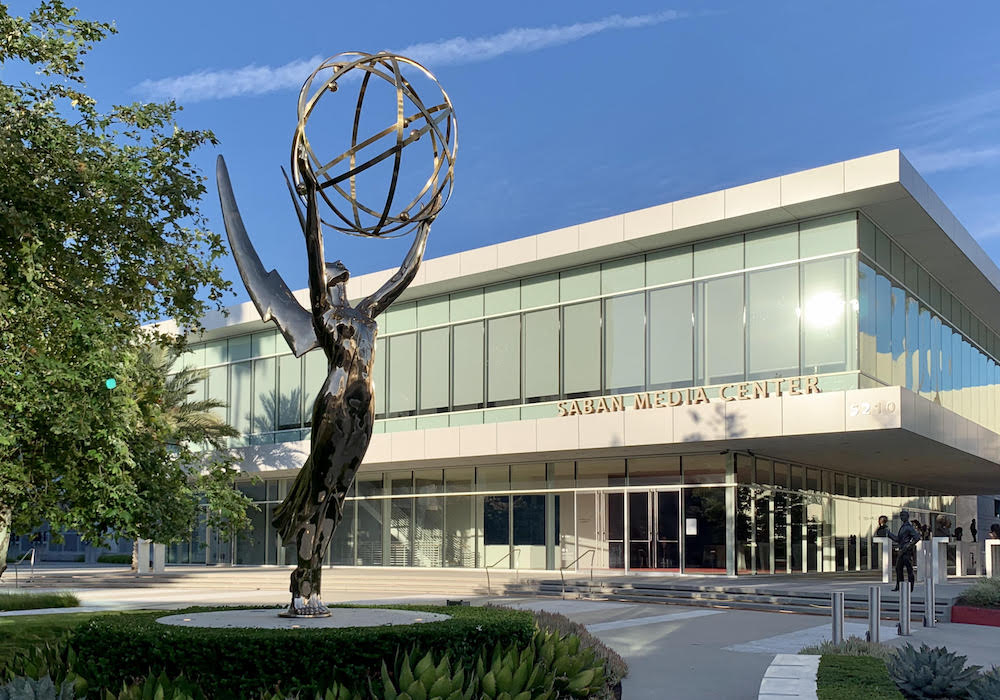 The pace of this first virtual ceremony made me forget who won a few seconds after they left the screen. There was barely any time to process winners, let alone ask a friend who was just onscreen or what show they’d won for — and people working behind the scenes typically need a little extra time to be recognized because they’re not famous. I don’t know what the solution is; this could just be an adjustment required for virtual ceremonies, or an attention deficit issue on my end. Bringing in Byer more often could help, especially if she offered a fun fact on the previous winner or their show. Maybe producers could show an extra clip of the winner’s work? (I stand alone on an island whose population loves awards shows that show clips of the nominees.) But Night One went by too fast — longer awards shows are good, actually!

Big surprise, eh? The Emmy-nominated “Nailed It” host wasn’t onscreen that often during the first night (she’ll get more to do on Saturday’s FXX broadcast), but she clearly and concisely explained what was happening, threw in a few affable lines (“Honestly, if you don’t like me now, you won’t like me for the next four days”), and even made a sponsored segment from Kia about fake COVID awards feel more like a reminder of what matters right now than a misguided idea stretched way too thin. (Calling the “Stranger Things” kids “super-spreaders” for participating in “Carpool Karaoke” is always a good joke, though.) Looking forward to more!

With only 10 minutes left in the show, just when you thought you might escape an awards show without an awkward “In Memoriam” segment, bam — there it was. A long list of names scrolled down the screen, in no discernible order, as random craft artists were singled out with a picture and a credit for one of their shows. Some got the golden flash over their name that preceded a photo highlight, and some did not. Why? I honestly don’t know, but the segment managed to create the same controversy of so many past, in-person awards shows by choosing which deceased filmmakers got special treatment and which didn’t (much like when guests would applaud for one name more than another during past tributes). Here’s hoping this isn’t a recurring segment.

Despite acknowledgements that this year’s ceremony was going to be different, as well as promises that producers would lean into the shift to create more exciting changes, the bulk of entertainment from Night No. 1 came from the presenters’ introductions and the recipients’ speeches, and both were largely lacking in originality.

Jim Gaffigan kicked things off with a lengthy plug for his show. Kareem Abdul-Jabbar led into a video package on BLDPWR, an organization trying to support Black artists in the Entertainment industry — during a night when very few Black nominees actually won. The “American Factory” directors fell into the 4% of nominees who didn’t participate in pre-taping an acceptance speech, so of course they won.

Does all this sound familiar? It should. Awkward awards banter, talk-heavy video packages, and absent winners are all awards show staples, as are quickly recited “thank you” speeches and stilted “reading off a teleprompter” intros. Very few honorees tried to stand out, many looked tired or even annoyed to be recording themselves, and it led to a rather flat ceremony,\ since these people were its main building blocks.

The one reliable factor of entertainment? Mistakes. Despite six months to learn FaceTime, “Holy Moley” host Rob Riggle still left his hand on his phone’s camera when recording an introduction. When Eric Milano won back-to-back sound awards for “Apollo 11,” they aired the same pre-recorded acceptance speech twice, which meant hearing “Consider going vegan, and let’s get money out of politics!” two times in a row (which, fine — at least he said something unique). There were a few awkward pauses here, and a few obvious edits there, but that only goes to show how polished the whole endeavor felt — a stark contrast to the electricity of a live show. Here’s hoping the coming nights give producers better material to work with.

The Creative Arts Emmy Awards have never been designed as a mainstream draw, and this year’s ceremonies are no different. Yes, these are the first to air in their entirety, but they’re only available through the Emmys’ website (via a YouTube livestream). That should make them easily accessible for whoever wants to watch (namely, publicists, reporters, and nominees), but Night No. 1 didn’t even seem to attract those key audience demographics. At the 15-minute mark, 1,330 people were watching; at the 45-minute mark, viewers held steady at 1,341. To say those are far from gangbuster numbers misses the point, but it’s worth asking whether or not this version of a virtual ceremony is the best way to honor each winner. Sending out a press release, sharing the news on social media, relying on word of mouth from networks, colleagues, and friends — all of that still happened after the virtual ceremony aired, so it’s hard to say watching it live was anything but a bonus. Maybe it was. New Emmy winner Laura Karpman sure seems happy. But there’s still room for improvement. Bring on tomorrow night.

The Creative Arts Emmy Awards will be given out the week of September 14. The virtual ceremonies airing Monday – Thursday will be streaming via the Emmys livestream. Saturday’s last Creative Arts ceremony will air on FXX. The 72nd Annual Primetime Emmy Awards will take place virtually on Sunday, September 20. (See our awards calendar for a more detailed breakdown of important dates.) ABC is broadcasting the ceremony.

Related posts:
Dr. Terry Dubrow Tackles an "Extraordinarily Complicated" Case for a Butchered Beauty on Botched
‘We Are Who We Are’s Italian Setting Isn’t Just Gorgeous – It’s Thematically Significant
Popular News
Alicia Keys, Common, Snoop Dogg Decry Breonna Taylor Decision
24/09/2020
Man Utd wonderkid Ramon Calliste, called ‘the next Giggs’, now owns luxury watch business and makes £5m a year – The Sun
26/03/2020
Megan Thee Stallion Addresses Criticism Over Twerking: ‘I Love to Shake My A**’
26/03/2020
Police guard shops to stop coronavirus panic-buyers and enforce social distancing – The Sun
26/03/2020
Coronavirus: Good Morning Britain’s Dr Hilary reveals ‘game-changing’ self-testing kit
26/03/2020
Recent Posts
This website uses cookies to improve your user experience and to provide you with advertisements that are relevant to your interests. By continuing to browse the site you are agreeing to our use of cookies.Ok