It’s one thing to present a hopeful vision of the future, it’s another to break new ground in the present.

With its third season, “Star Trek: Discovery” has achieved both — to eye-popping effect in some cases, to invisible seamlessness in others. In fact, it’s hard to think of any other season of “Star Trek” in the franchise’s 54-year history that offers up more changes, in front of the camera and behind the scenes. In one particular respect, “Discovery” is leaving a warp trail that the rest of the TV industry can follow: Season 3 had all aspects of its post-production completed with a crew of artists working entirely from their homes.

But the changes toward a more cutting-edge mission for the series’ production began well before lockdown. The story development phase for Season 3, which just debuted its first episode Thursday on CBS All Access, involved a radical break with what the series had been thus far. It had been a prequel to “The Original Series” involving events only hinted at in the 1960s show, such as a war with the Klingons, and characters such as Capt. Pike and Spock. Many, many connections to existing characters and events were shoehorned in here and there. But despite all that IP-juggling, fans were impressed by the performances of the show’s talented cast, especially Sonequa Martin-Green as the series’ lead, Michael Burnham.

In just 26 episodes, Martin-Green portrayed one of the clearest arcs any character on any iteration of “Trek” has ever had, from “being as Vulcan as is possible, a result of having to assimilate on Vulcan and believing that being Vulcan was superior,” the actress told IndieWire, to “melting into her emotionality and humanity.” Compare the start of Season 3 with her performance in the pilot episode, and it almost seems like Martin-Green is playing a different character. “I believe that one of the tenets of great storytelling is change…permanent change. And that is something that I champion. And it’s something that I believe our iteration [of ‘Trek’] champions as well.” Season 3 certainly offers that — along with some groundbreaking representation.

With these new episodes, “Discovery” has jumped 930 years into the future, into a strange new time: the 32nd Century. Suddenly, it’s no longer a prequel, but exploring a completely unknown period of “Trek” history. Franchise head Alex Kurtzman, who produces all the “Trek” shows for CBS All Access with the production company he founded in 2014, Secret Hideout, confirms “Discovery” will stay in the 32nd Century for however many seasons the show runs. This was a clean break from the franchise myth-making that came before. A lot of thought went into the selection of this particular blank canvas: over Zoom, Kurtzman nodded and chuckled when this writer suggested that previous “Trek” series such as “Enterprise” only explored as far as the 31st Century. That series’ Temporal Wars get a shout-out in Season 3’s first episode.

“We did not want the time jump to be a gimmick,” Kurtzman said. “There are so many extraordinary new opportunities and story options, that it feels like an endless well. We’re also now separated from preexisting canon, which means we get to write the future of ‘Star Trek’ on this show, and it’s entirely fresh snow.”

Kurtzman is quick to point out that neither he nor the writers’ room found the setting of the first two season to be constraining. Especially with the introduction of Ethan Peck’s Spock and Anson Mount’s Pike, the plan was always for the Discovery crew to have a finite amount of time with those familiar characters — the time jump to the 32nd Century was planned from the very start of developing Season 2.

To convey the wholly alien reality of 3188, however, Kurtzman and new co-showrunner Michelle Paradise knew they needed a drastic new look for the show. They took the first episode to Iceland to create a sense of complete visual unfamiliarity — Vasquez Rocks this ain’t. Along with the pilot episode, which filmed in Jordan, this is, by this Trekkie’s count, as well as by Kurtzman’s and that of two superfans (hat tip to Jordan Hoffman and Chris Chafin) only the second time any “Star Trek” series has filmed outside the U.S. and Canada. The “Discovery” home base for shooting has been Toronto, while all the other series to date, including the recent “Picard,” has made use of virtually every location possible in California. Anaheim Convention Center amusingly became Starfleet Headquarters on the Patrick Stewart-starring series. 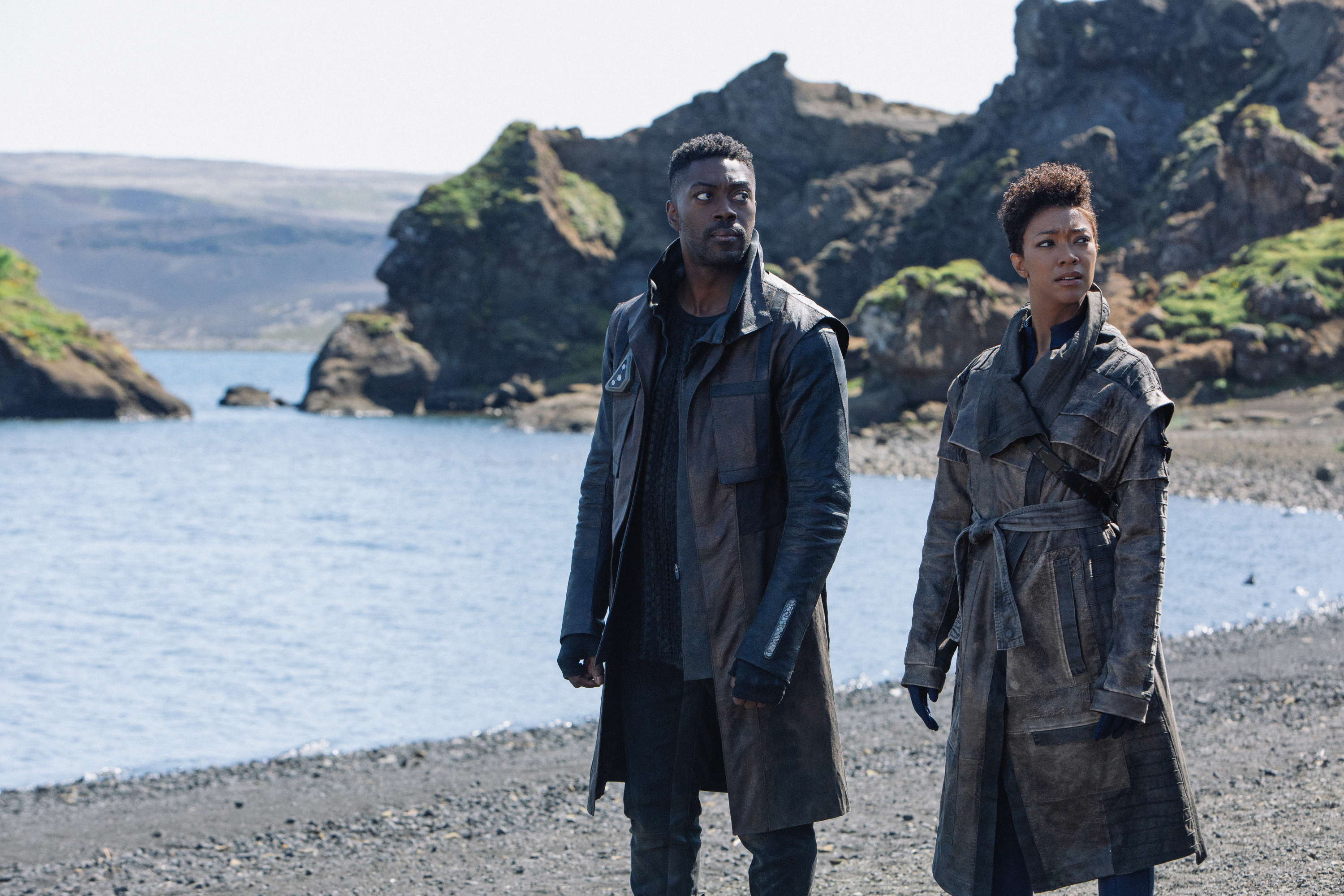 It’s almost a shock to see hill-like dunes of black sand and swooping aerial shots of very un-California terrain when you watch Season 3; other changes are far more subtle, and the result of the shoot wrapping just 10 days before the start of lockdown. There was no ability to do pick-ups for inserts or connective reaction shots, so meticulous computer-generated images were used to double characters and create a sense of visual continuity even when coverage hadn’t been there. Think “Arrested Development” Season 4 but with seven years of advances that now really do make any cheats appear seamless (invisible in the first four episodes made available to critics). “The visual effects team was extraordinary, because there are some shots that you will never know aren’t practical, aren’t actually shot on location, that are full CG shots, full CG elements of things that would typically have been an insert,” Kurtzman said.

These aren’t entirely CG doubles for the actors, though. Each actor who needed pick-ups received motion-capture equipment to finish elements of their performance at home. For those inserts, Kurtzman said, “It’s an actual actor at their home motion-capture studio, which then gets rendered in the computer as a living thing. It’s a real person… Each of our actors have been scanned, so we can actually impose their faces on a body, which is quite something.”

Composer Jeff Russo sent microphones to each of the orchestra members’ homes so that they could record their individual parts and they could all be mixed together later on, as if playing in unison. Kurtzman and Paradise reviewed visual effects with VFX supervisor Jason Michael Zimmerman several times a week. Creating VFX even under normal circumstances takes 8-10 months per episode, and work on Season 3’s VFX continues.

Remarkably, Season 4 will start shooting on November 2. The entire cast recently traveled to Toronto to begin their quarantine before production starts, with full COVID safety protocols in place. The kind of international location shooting we saw in Season 3’s first episode is out, but Kurtzman noted, “it looks like we are going to be getting an AR wall for future seasons of ‘Star Trek’ on multiple shows.”

It isn’t just the film and TV industry that’s having to embrace the unknown like never before right now. What better to lead an optimistic path into all that uncertainty than a franchise that has exploration in its DNA? As Martin-Green said, “You see this crew go into this brand new world that we’ve never known before, and, you know, we [in 2020] are also now in a world that we’ve never known before. No one alive has ever experienced this.”

Never has “Boldly going where no one has gone before” meant quite so much.

Related posts:
Why Monique Samuels and Charrisse Jordan aren’t friends anymore
Chloe Madeley strips to knickers to unleash killer figure in racy photoshoot
Popular News
Obi-Wan Kenobi Disney Plus Series Starring Ewan McGregor Begins Filming In March
21/10/2020
Man Utd wonderkid Ramon Calliste, called ‘the next Giggs’, now owns luxury watch business and makes £5m a year – The Sun
26/03/2020
Megan Thee Stallion Addresses Criticism Over Twerking: ‘I Love to Shake My A**’
26/03/2020
Police guard shops to stop coronavirus panic-buyers and enforce social distancing – The Sun
26/03/2020
Coronavirus: Good Morning Britain’s Dr Hilary reveals ‘game-changing’ self-testing kit
26/03/2020
Recent Posts
This website uses cookies to improve your user experience and to provide you with advertisements that are relevant to your interests. By continuing to browse the site you are agreeing to our use of cookies.Ok