Home » TV and Movies » Space Force Mocked by Everyone for Calling Members 'Guardians': 'How Is This NOT a Joke'

Space Force Mocked by Everyone for Calling Members 'Guardians': 'How Is This NOT a Joke' 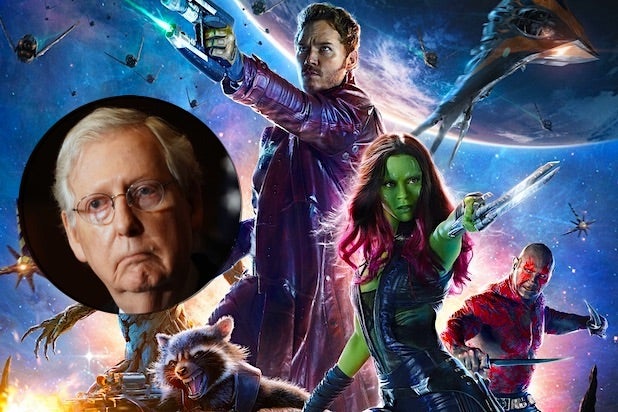 Capping off a thoroughly embarrassing year for the nation’s newest not-actually-independent, not-actually-separate branch of the military, the U.S. Space Force on Friday invited nearly universal ridicule when it rolled out the official title by which its personnel will be known — along with an extremely self conscious slogan justifying that ridiculous title.

We understand 2020 has been a wild couple of decades so to catch you up, back in January the Space Force kicked off the year by revealing that its members will, for some reason, wear green camouflage uniforms, which had everyone wondering if that means they plan to invade the forest moon of Endor. And then less than a week later, it unveiled the organization’s official logo, something everyone noticed looks pretty much identical to the Starfleet insignia from “Star Trek,” something we’re pretty sure is not an accident.

Space Force wisely laid low for the rest of the year, probably in part because the COVID-19 pandemic, which has killed more than 300,000 Americans thanks in part to the Trump administration’s disastrous response, knocked almost everything else out of the news. Until Friday, when the Trump administration official in charge of Trump’s COVID-19 policy decided to change the topic of conversation.

That would be Vice President Mike Pence, who announced the official name for Space Force personnel will be “Guardians.” And no, we aren’t kidding.

Shortly after the momentous occasion, the official Space Force Twitter decided to strip the organization of even more dignity with a tweet celebrating the new title. First, it claims that the name “Guardian” took a full year to come up with — which uh that’s not the flex you think it is, Space Force. Second, the organization shared a graphic that for some reason included the tagline “Heritage. Mission. Culture.” Finally, again we are not kidding, it bragged that the title “Guardian” is “a name chose by space professionals, for space professionals.”

No really, see for yourself:

Basically, no one can believe that this is a real thing and we can hardly blame them. Some people roasted that ridiculous “space professionals” thing. Others made fun of Space Force for bragging about how long it took them to come up with something like “Guardians.” Still others joked that “Heritage. Mission. Culture.” sounds uncomfortably like some kind of weird white nationalist slogan — or just savaged it for sounding corny and stupid.

But mainly, Pence might as well have just gone ahead and made the Space Force motto “I Am Groot, because pretty much everyone mocked it for apparently trying to associate itself with Marvel’s “Guardians of the Galaxy” franchise.

“So now Trump’s Space Force has stolen its logo from Star Trek and its naming conventions from Guardians of the Galaxy,” the Palmer Report joked.

“I want to be sure to use their full title accurately, so has there been any word on whether they are Earth Guardians, Space Guardians or Guardians of the Galaxy? And what is being done to keep the other services from calling them Trekkies?” said

“Looking forward to sharing our great cultural heritage and traditions with outer space. Like… BBQ, baseball, and stubbornly refusing to take even the tiniest precautions against a raging pandemic,” Media Matters editor Parker Molloy said.

“I want to be sure to use their full title accurately, so has there been any word on whether they are Earth Guardians, Space Guardians or Guardians of the Galaxy? And what is being done to keep the other services from calling them Trekkies?” asked former director of U.S. Office of Government Ethics Walter Shaub.

Shaub brings up a valid point. But could it be maybe this is what the government wants? That they’re really just nerds like us, trying to do the impossible of bringing together all the big pop culture franchises. Or is it just that they’re really, really, really bad at this and unaware of how much they embarrassed themselves. We’ll let you decide.

Related posts:
Shania Twain Sent Brad Pitt the Best Birthday Message Ever
Netflix Delaying ‘The Gray Man’ Production Amid Surging California COVID-19 Cases
Popular News
Larry King's Estranged Wife Shawn Speaks Out After He's Laid to Rest: 'We All Wore His Suspenders' at Funeral
28/01/2021
Man Utd wonderkid Ramon Calliste, called ‘the next Giggs’, now owns luxury watch business and makes £5m a year – The Sun
26/03/2020
Megan Thee Stallion Addresses Criticism Over Twerking: ‘I Love to Shake My A**’
26/03/2020
Police guard shops to stop coronavirus panic-buyers and enforce social distancing – The Sun
26/03/2020
Coronavirus: Good Morning Britain’s Dr Hilary reveals ‘game-changing’ self-testing kit
26/03/2020
Recent Posts
This website uses cookies to improve your user experience and to provide you with advertisements that are relevant to your interests. By continuing to browse the site you are agreeing to our use of cookies.Ok