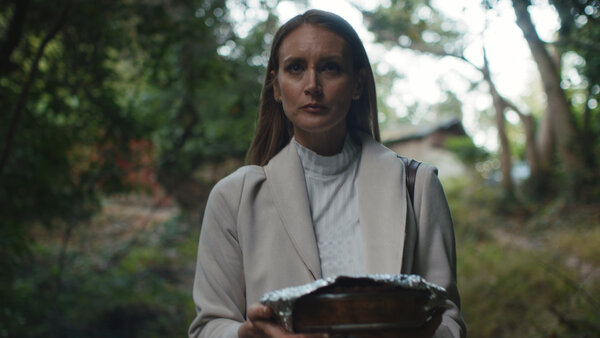 Unlike the majority of recent horror films that engage with race relations in the United States and the country’s legacy of white nationalism (like “Get Out” or this year’s “Nanny”), “Soft & Quiet,” written and directed by Beth de Araújo, takes the racist’s perspective.

The movie’s title refers to an approach that one of its characters, Emily (Stefanie Estes), sees as the most effective for spreading the gospel of white supremacy. Emily is a clean-cut kindergarten teacher and the leader of an alliance of far-right women. De Araújo and the cinematographer Greta Zozula’s roving hand-held camera trails the group of seemingly innocuous women in what seems to be real time.

After a vaguely unsettling opening scene in which Emily quietly pits a student against a Latina custodian, the film escalates with stomach-dropping abruptness when the foil is lifted off a pie Emily has baked, revealing a swastika carved into the dough. It’s just a joke, she claims, though the cheery group’s resemblance to the P.T.A. or a book club for suburban mothers makes their hate-mongering rhetoric especially chilling.

More disturbing yet is how fluidly their ideas materialize into something real and physical when four of its members — emboldened by each other, with extra encouragement from a brutish newcomer, Leslie (Olivia Luccardi), a younger woman recently released from prison — impulsively descend upon a mixed race Asian American woman’s home to vandalize it and steal her possessions. Their crimes end up exceeding even their own expectations.

The film is a palpable joyride steered by the kinds of women who, de Araújo seems to think, could easily get away with it. In this sense, it attempts to be both a political cautionary tale and a horror film committed to shock-and-awe thrill seeking. The brutal possibilities of the white supremacist mind-set are nothing to shy away from. Still, the film’s admittedly jarring cruelty does little beyond press down on old bruises, turning the realities of racialized violence into an immersive spectacle with the kind of real-world sadistic allure one might find in a serial-killer movie.