This month’s under-the-radar streaming picks include clever riffs on the police procedural and the crime thriller; a handful of relationship stories, in keys both comic and tragic; and a pair of memorable (and upsetting) documentaries.

Stream it on Amazon.

What begins as a “Memories of Murder”-style police procedural veers into darker, wilder territory in this unnerving and occasionally stomach-churning horror thriller from the writer and director Na Hong-jin. Jong-goo (Kwak Do-won) is a policeman whose investigation of a string of grisly killings is influenced by the gossip around him: “All this happened,” he is told, “after that Japanese man arrived.” When his family is drawn into the investigation, Jong-goo discovers exactly what he’s capable of — and then, things get really horrifying. The expansive 156-minute running time allows leisurely detours into character drama and bleak humor, but the picture never goes slack; there is something sinister in the air of this village, and Na builds that sense of inescapable dread with patience and power.

Stream it on Amazon.

Many of Kelly Reichardt’s acolytes consider this eco-thriller to be among the director’s lesser efforts, and when placed against “Wendy and Lucy” or “First Cow,” perhaps that’s true. But Reichardt on her worst day surpasses most of her contemporaries on their best, and there’s much to recommend in this morally thorny story of a trio of radical environmentalists (Jesse Eisenberg, Dakota Fanning and Peter Sarsgaard) as they meticulously plot and execute a dangerous act of protest. Reichardt hits the thriller beats, but casually and modestly; her emphasis, as ever, is on character, and she finds as much suspense in interactions as in the action itself. 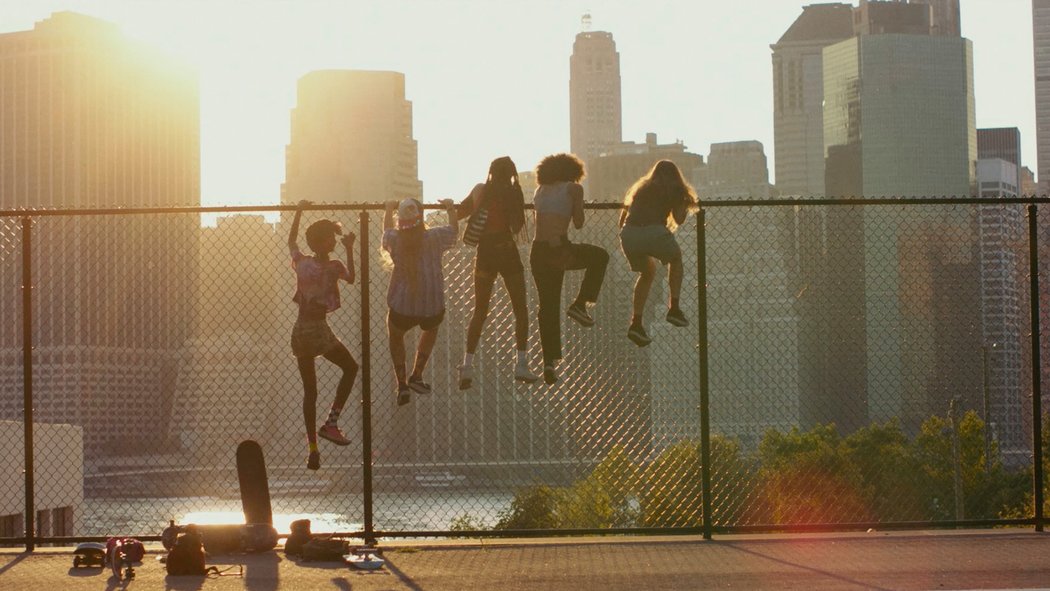 The filmmaker Crystal Moselle’s roots are in documentary — she directed the 2015 Sundance sensation “The Wolfpack” — and that ear for the rhythms and routines of real life are apparent in this hybrid feature, in which a group of female New York City skateboarders play fictionalized versions of themselves. Rachelle Vinberg stars as the outsider looking in, a would-be skater who idolizes this all-girl crew from social media, and works her way into their midst. The details are contemporary (and keenly observed), but “Skate Kitchen” is a good old-fashioned coming-of-age story, in which norms are challenged, lessons are learned and young people must decide which version of their possible selves they want to be.

The writer and director Tom Cullen lays out the methodology for his relationship drama clearly and early with a loose two-shot of the couple at its center, in the fourth year of their union, out with family and making little jokes about very real issues between them. This predictably escalates into a knock-down-drag-out fight when the two are alone together. Cullen’s wise and observant script is, in many ways, about that divergence: the difference between a couple’s actions in public and in private. And the narrative structure — skipping throughout the six years of their relationship, with signaling shifts in film stock and aspect ratio — allows Cullen to maximize that contrast. He’ll go from their first night together to their last, but not as a gimmick; he seems fascinated by the fact that two people who share such hope can eventually cause each other such pain. It’s a tough, perceptive movie, and also a funny, sexy one.

Stream it on HBO Max.

Countless contemporary romantic comedies have built their plots on deceptions, secret motives, false identities and so on, carried out long past the point of anything resembling plausibility. This London-set boy-meets-girl tale from the director Ben Palmer and the writer Tess Morris sets up that sort of duplicity. When Nancy (Lake Bell) is mistaken by Jack (Simon Pegg) for his blind date, she chooses to go along with his error. What’s ingenious is how the film unexpectedly implodes the chicanery early on, and then watches the fireworks. The result is both a winking critique of the genre and a fine example of it. Bell and Pegg puncture conventions while still generating genuine chemistry and comic byplay.

Zosia Mamet was the scene-stealer supreme of the HBO comedy “Girls,” her side plots often more compelling than the main narrative, so it’s no surprise that this starring vehicle is such a charmer. She is Diana, an intelligent but insecure young woman trying to piece her life together; the title character is her ex-boyfriend (Matthew Shear), who returns to her proximity when she unwittingly moves into his apartment building. Mamet plays Diana’s dilemma with the right mix of pathos and discomfort, while the writer and director Sophie Brooks crafts emotional stakes high enough to prevent the story from veering into sitcom territory.

Stream it on Netflix.

In 2018, Matthew McConaughey starred in “White Boy Rick,” a dramatization of the early life of the teenage drug dealer Richard Wershe Jr. But this documentary account was made first, and is the superior telling. The director Shawn Rech uses archival footage, contemporary interviews and re-enactments to tell the story of Wershe’s rise and fall, drawing heavily on the impressions of the rich cast of colorful (and, mostly, scary) characters around him. But it’s not just his story — it’s steeped in the history of Wershe’s home turf of Detroit, and how it fell on hard times in the late 1980s thanks not only to the drug trade but also to corruption in the police department and at City Hall. The filmmaking is mostly by the numbers, but this is such a compelling story, it hardly matters.

Stream it on HBO Max.

On Jan. 20, 2020, the Diamond Princess cruise ship departed the Port of Yokohama, with 2,666 passengers and 1,045 crew members on board. By the time it returned after two weeks of stops throughout Southeast Asia, it had become a petri dish for Covid-19, with passengers quarantined in their staterooms as the number of positive cases ticked worrisomely upward every day. Hannah Olson’s mini-documentary augments the memories of a handful of passengers and crew with their own video recordings of the ordeal, from their early, carefree (and, in retrospect, infectious) group activities to the days of worry and fear. It becomes a story of the haves and have-nots; since someone has to feed the guests, the crew has to keep working, and watching them do so (in close quarters, with no support) is as upsetting as any horror movie. “The Last Cruise” is a tough watch, but a necessary reminder of how, from the very beginning, the pandemic brought ongoing issues of class inequality to the fore.