Earlier this week, viewers of Loose Women, Lorraine and This Morning noticed some strange occurrences among the ITV presenters. Several Ant McParlin and Declan Donnelly fans were quick to assume they were behind the comical live TV moments due to a segment on their ITV Saturday Night Takeaway show, but some viewers had accused the presenters of being “rude” earlier this week.

Ant and Dec have now revealed the truth that they were indeed behind the bizarre moments, which saw This Morning faves Holly Willoughby and Phillip Schofield making strange comments towards chef James Martin.

The two kept making unusual remarks and interrupting the segment, with Holly having to apologise.

She said: “Go on, sorry, I am focusing,” before she and Phillip burst out laughing for no reason.

Meanwhile, Lorraine, during an interview with KSI, grabbed fans’ attention on Monday by yawning while speaking to him and she repeated that she had a cramp in her leg. 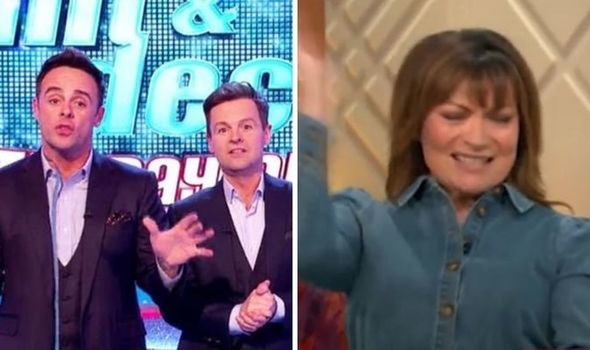 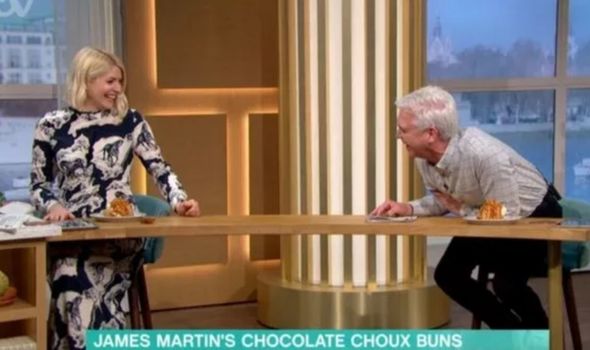 She told the YouTuber: “Sorry I don’t know what’s wrong with me today.

“I’ve got a wee bit of cramp in my leg, I wish you were here so you could help. I’m just going to walk it off.

“If I walk it off a wee bit it will be fine. Sometimes it happens, sometimes it doesn’t.

“But it’s really annoying, it’s poppycock, that’s what it is.” 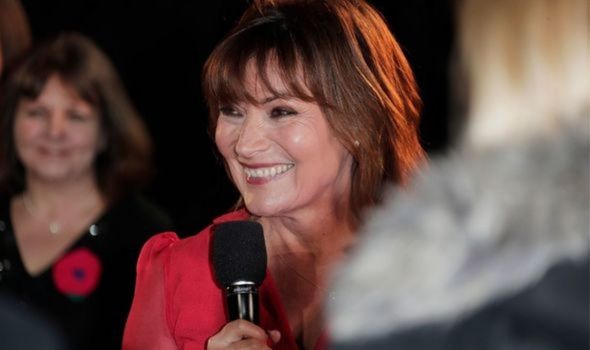 Lorraine Kelly ‘gets cramp’ during interview with KSI

KSI was left laughing by her antics while some viewers at home wondered what was going on.

Viewers on Saturday Night Takeaway have now seen what was going on behind the scenes, with Stephen Mulhern holding up cards for presenters to read aloud on air.

One said: “The real Lorraine Kelly should be nominated for an Oscar #Saturdaynighttakeaway.”

Another added: “Everyone knew it was ant and dec #saturdaynighttakeaway.”

While things on This Morning were just as odd, with Phillip telling Holly during the TV show he had cramp in his arm.

His co-host proceeded to get out of her seat to go and look for some salt because she thought it would be good for Phillip’s cramp.

“I’ll get some salt and walk it off,” Holly continued as she walked off in the opposite direction of the kitchen.

“Hang on, I’m going the wrong way,” she said. “I can’t find the salt, no there was something over there but it was a bit moist.”

Many confused fans will be relieved to learn why the presenters had all acted so strangely, and many had their suspicions that all would be revealed in tonight’s Saturday Night Takeaway.

Saturday Night Takeaway continues on ITV on Saturday at 7pm.