Sally, 49, and BBC Breakfast’s political correspondent Chris Mason, 41, were on hand to host Sunday’s programme as Naga, 46, and Charlie Stayt, 58, take a break from their roles. Their replacements discussed the latest headlines coming from across the globe, including the ongoing developments of the pandemic. However, they also spoke about some light-hearted topics and it was during one of these moments, Sally said “sorry” to her BBC co-star for slipping into her sports role.

Chris began the discussion as he said to viewers: “Those of us who have watched episodes of Planet Earth or Blue Planet know the natural world is full of unusual sights.

“But take a look at this,” he continued before a video of a seagull mounting another seagull while it was flying appeared on-screen.

Commentating on the clip, Sally remarked: “Yeah, he looked like he was tired, didn’t he? He has a little break, hitches a ride, and eventually flies off.”

Listening to his co-star, Chris interjected as he told her: “This is where your sports journalism is coming to the forefront with a little bit of commentary.”

Issuing her apology, the sports reporter exclaimed: “I’m sorry. I didn’t even mean to commentate, I just did it.” 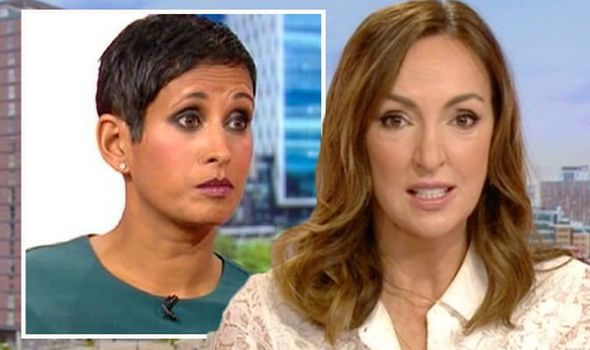 “I didn’t know I was doing it, I’m so sorry,” Sally said again as she and Chris laughed off the comical moment.

“Get some action replay,” the political correspondent joked before the pair continued with the rest of the show.