“We announced the same date for the SAG Awards last July,” group says 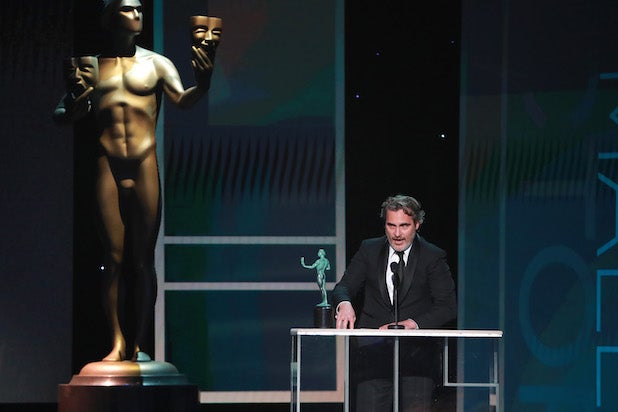 SAG-AFTRA, the combination of the Screen Actors Guild union and the American Federation of Television and Radio Artists, is “extremely disappointed” that the rescheduled Grammys are now in conflict with its own SAG Awards.

The 2012 SAG Awards date was announced back in July 2020. SAG-AFTRA says it is “in contact” with the Recording Academy, the group that puts on the Grammys.

“We are extremely disappointed to hear of the conflicting date, March 14th, announced today for this year’s Grammy Awards telecast,” SAG-AFTRA said in a statement. “We announced the same date for the SAG Awards last July with the intent to give the greatest possible scheduling consideration for other awards shows. We expect the same consideration from sister organizations throughout the industry.”

“The SAG Awards recognizes outstanding acting performances over the past year,” the group continued. “We will again put on a spectacular show that accomplishes that mission. Our two organizations, SAG-AFTRA and the Recording Academy, share members and work together effectively to advocate for artists in many areas. In an environment that is increasingly challenging for televised awards programs, we also have a mutual interest in successfully showcasing the artistry and talent of our respective memberships. We are in contact with the Recording Academy and will continue to work with our sister organizations to find ways to make this year’s awards season as successful as possible.”

The 2021 Grammys were postponed over COVID-19 concerns and ultimately rescheduled for March 14.

“After thoughtful conversations with health experts, our host and artists scheduled to appear, we are rescheduling ‘The 63rd Annual Grammy Awards’ to be broadcast Sunday, March 14, 2021. The deteriorating COVID situation in Los Angeles, with hospital services being overwhelmed, ICUs having reached capacity, and new guidance from state and local governments have all led us to conclude that postponing our show was the right thing to do,” the Recording Academy’s Harvey Mason Jr., CBS’ Jack Sussman and Grammy Awards executive producer Ben Winston said in a joint statement.

They continued: “Nothing is more important than the health and safety of those in our music community and the hundreds of people who work tirelessly on producing the show. We want to thank all of the talented artists, the staff, our vendors and especially this year’s nominees for their understanding, patience and willingness to work with us as we navigate these unprecedented times.”

The 2021 Grammys, which will be hosted by “The Daily Show’s” Trevor Noah, was intended to be held without an audience and only allowing presenters and performers on site during the show. The Grammys are traditionally held at Staples Center in downtown Los Angeles and typically draw 18,000 attendees. This year, the show was planned to be held in the downtown area but in a greatly limited capacity.

Related posts:
Delaware Shelter Where Joe Biden Adopted Dog Major Hosting 'Indoguration' for Rescue Canine
Is Starbucks open during lockdown 3, opening times and advice
Popular News
'Gossip Girl': The Real Reason Some People Think Blake Lively Was a 'Diva' on Set
25/01/2021
Man Utd wonderkid Ramon Calliste, called ‘the next Giggs’, now owns luxury watch business and makes £5m a year – The Sun
26/03/2020
Megan Thee Stallion Addresses Criticism Over Twerking: ‘I Love to Shake My A**’
26/03/2020
Police guard shops to stop coronavirus panic-buyers and enforce social distancing – The Sun
26/03/2020
Coronavirus: Good Morning Britain’s Dr Hilary reveals ‘game-changing’ self-testing kit
26/03/2020
Recent Posts
This website uses cookies to improve your user experience and to provide you with advertisements that are relevant to your interests. By continuing to browse the site you are agreeing to our use of cookies.Ok