During the NBC News town hall with Trump, Guthrie pressed Trump on his past evasive comments about white supremacists and Qanon 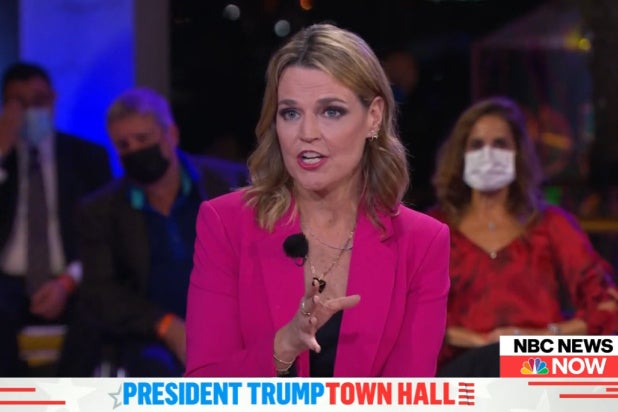 Donald Trump may have avoided the debate with Joe Biden that had been scheduled for Thursday night, but that doesn’t mean he had an easy evening in his NBC News town hall. The moderator, Savannah Guthrie, repeatedly pushed back on Trump in response to some of his answers, pressing on him in a way that doesn’t happen all that often. And many Republican Trump supporters were not happy about that.

It was, indeed, reminiscent of Trump’s interview with Jonathan Swan of Axios back in August, in which Swan kept pushing Trump for more details in response to Trump’s evasive answers. One of the viral moments from the hour-long town hall saw Guthrie press Trump on his retweeting of a conspiracy theory about the death of Osama bin Laden.

“That was a retweet. That was an opinion of somebody,” Trump said when Guthrie asked about it. “I’ll put it out there, people can decide for themselves. I don’t take a position.”

Guthrie, incredulous, replied: “You’re the president! You’re not someone’s crazy uncle who can just retweet whatever!”

Conservatives on Twitter did not enjoy the combative nature of the NBC News town hall, and put the blame squarely on Guthrie for how it went. Below you can read a sampling of those responses.

Related posts:
Anderson Cooper Teases Andy Cohen After the Bravo Host Posts Hilarious Throwback Photo
Four shot, including one critically, in 90-minute span, NYPD says
Popular News
Jenny Slate working on ‘90s-comedy-inspired script where she plays twins
21/10/2020
Man Utd wonderkid Ramon Calliste, called ‘the next Giggs’, now owns luxury watch business and makes £5m a year – The Sun
26/03/2020
Megan Thee Stallion Addresses Criticism Over Twerking: ‘I Love to Shake My A**’
26/03/2020
Police guard shops to stop coronavirus panic-buyers and enforce social distancing – The Sun
26/03/2020
Coronavirus: Good Morning Britain’s Dr Hilary reveals ‘game-changing’ self-testing kit
26/03/2020
Recent Posts
This website uses cookies to improve your user experience and to provide you with advertisements that are relevant to your interests. By continuing to browse the site you are agreeing to our use of cookies.Ok