Raven's Home Is Getting a Dose of Queer Eye From Karamo 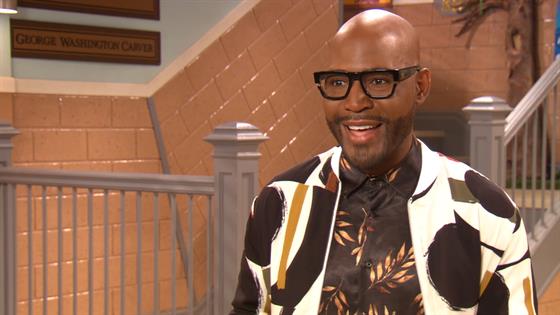 Raven’s Home is getting a dose of culture this weekend.

Queer Eye‘s culture expert Karamo Brown is guest-starring in Sunday’s all-new episode, and E! News has the exclusive scoop straight from the set of the Disney Channel series, where Karamo was channeling not just himself, but also two of his Queer Eye costars in his Raven’s Home character.

“My character’s name is Miguel Harris and he’s an interior designer, and I’m actually channeling a bit of Bobby, myself, and Jonathan Van Ness,” Karamo says. “Like there’s a mixture in between all three of us that I’m kind of bringing to this character.”

“So like there’s parts of my scenes where I have to be a little more heartfelt–that’s me,” he says. “There’s parts where I’m really like, I need to figure out what to do with this space, and that’s Bobby. And then there’s parts when I’m giving that comedic timing, which is our Jonny. So I’m bringing Queer Eye to Raven’s Home.”

Raven-Symone directed the episode (her second directing gig of the series), and tells us they hired Karamo because they wanted the personality he could bring.

“To be honest, we hired him because he’s Karamo,” she says. “Like he’s such a presence, so he did not shy away from that. He took it head on, and I think he did a great job.”

The episode is called “Slammed,” and follows two separate stories. In one, Raven’s kids Booker and Nia are participating in a poetry slam, and in the second, Raven and Chelsea are attempting some DIY.

“You have Raven and Chelsea getting their first business space and having to do some corrective designing,” she explains, which is where Karamo’s Miguel shows up.

“Raven Baxter thinks that he is super expensive, so she fires him, and tries to do it herself so he comes in and saves the day,” she explains. “So the storyline is open and that character is open for coming back for more episodes!”

Another thing we learned from Raven and Karamo is that they’re both obsessed with each other and each other’s shows, so hit play on the videos above to hear all the gushing!

The episode airs this Sunday at 8 p.m. on Disney Channel.