Pride Month is observed every June in the U.S. to honor the 1969 Stonewall Uprising in Manhattan, a flashpoint for the Gay Liberation Movement. Here’s a sampling of programming from TV networks and other media platforms, organizations and communities.

The premium cable network will feature more than 50 hours of LGBTQ+ programming including Xy Chelsea, Same Sex America, Beyond Opposite Sex, L Word Mississippi: Hate the Sin and Semper Fi; select episodes of Desus & Mero; and the first seasons of The L Word, The L Word: Generation Q, Queer as Folk, Work in Progress and Couples Therapy.

WarnerMedia’s streamer  is launching its Shine On spotlight page, which honors and recognizes its library of LGBTQIA+ stories, characters and creators. A list of curations that will be included on the page is here.

Discovery’s streaming service will premiere Season 6 of RuPaul’s Drag Race All Stars on June 24. It also will bow the sixth season of aftershow RuPaul’s Drag Race: Untucked! Both are moving from their original home at VH1.

NBCUniversal’s Spanish-language cable network is marking Pride Month with Celebrando el Mes del Orgullo (Celebrating Pride Month), a campaign to support the LGBTQ+ Latino community, celebrate their journeys and raise awareness of the challenges that remain for their progress. The campaign will feature stories of inspiring community members making a difference and kick off June 1.

The cable net is sharing stories of community leaders, friends, families and creators who take pride in the LGBTQ+ flag. The films include Jack & Yaya, Little Miss Westie and Mama Gloria and Vision Portraits.

NewFest’s summer series will run virtually from June 4-7, showcasing six new features, a short film program and a handful of LGBTQ-focused panels and special events, including a virtual live-read event fundraiser of Legally Blonde to celebrate the film’s 20th anniversary.

A three-day concert set for June 4-6 at the Los Angeles Memorial Coliseum hosted by Adam Lambert will bring together the area’s LGBTQ+ community and allied supporters for a long-awaited return to live celebration that will also give back to charities and Pride city partners across the country. The lineup includes Sofi Tukker, Daya, Hayley Kiyoko and Bronze Avery, with special appearances by Angelica Ross, Conchita, Geena Rocero, Ryan Jamaal Swain, Valentina Sampaio, Yungblud and Whoopi Goldberg. You can watch the livestream here, and the full lineup is below: 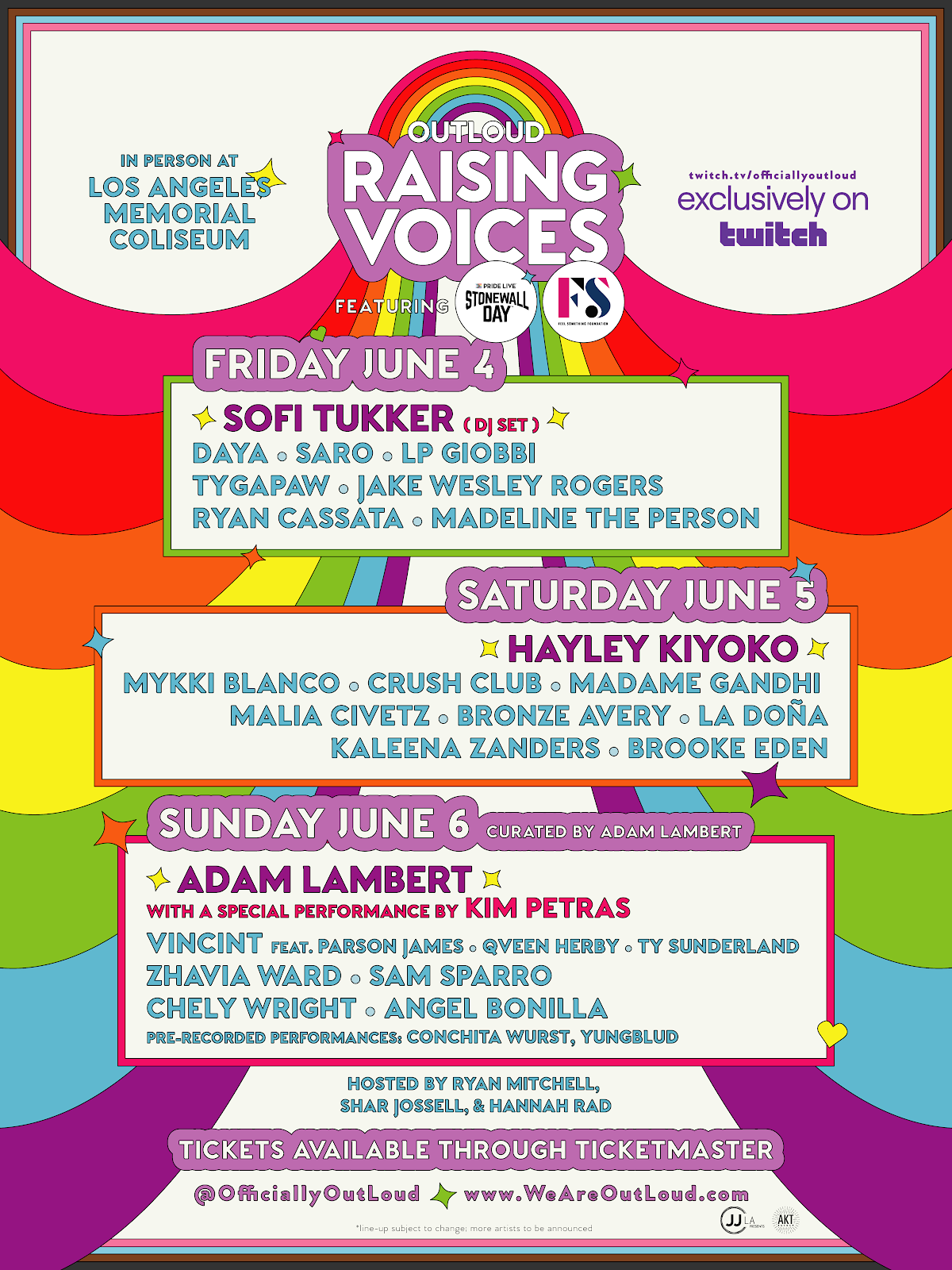