A Pittsburgh runaway and a star of a Harlem vogueing ballroom connect in Danielle Lessovitz’s drama. 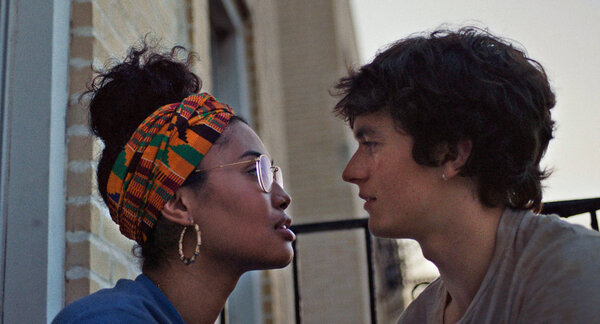 It’s difficult to make the Port Authority Bus Terminal in Manhattan look appealing onscreen. It has unforgiving lighting and blunt interior design. In her feature directing debut “Port Authority” (in theaters and on demand), the director Danielle Lessovitz gives the arrivals area diffuse lighting. The on-the-fly camera observes the Pittsburgh runaway Paul (Fionn Whitehead) crumpled in the corner, an outsider. But, though its dialogue aspires to make displacement and the search for belonging primary themes, the film struggles to convey that through its visuals.

Staying in a homeless shelter, Paul is meek, but his self-reliance makes him an easy recruit for a group that blackmails undocumented apartment tenants for money. When he wanders into a Harlem vogueing ballroom, he finds attraction and comfort in one of the star girls. Wye (Lenya Bloom) radiates an openness and frankness that is foreign to Paul. Between Paul’s homophobic white masculine friend circle and Wye’s generous queer family of color, a slight Shakespearean dynamic develops, shading the romance.

Bloom is an alluring actress, especially when playing more subtle dramatic beats. While she’s unable to elevate a rote script, Bloom, and her character, understand how to catch the gaze of an audience in a way that the camera does not. When Wye dances in front of Paul and makes a point about reclaiming the space that transgender people of color are rarely afforded, it is unfortunate that the film appears unsure of how to actually frame her as a performer and dancer.

This is true throughout other ballroom scenes, which have vivid colors, but are shot in disorienting ways that do the characters no favors. What’s the point of telling us about space reclaimed if we can barely make sense of it visually? “Port Authority” has its straight white lead explore unfamiliar territory, but it lacks the visual savvy to match the complicated implications of that journey.