Jimmy (played by Brian Dietzen) has been seen on NCIS grieving for his late wife Breena (Michelle Pierce) of late, after she tragically died during the current season of the CBS drama. Episodes of season 18 are still airing but with the conclusion set to air in May 2021, fans are keen to know when they will get their next dose of forensic crime drama and if it will be broadcast this year. Taking to Instagram recently, the actor who plays the team’s Medical Examiner, Brian, 43, seems to have revealed filming for new episodes could soon be underway.

With the current season set to conclude later this Spring, the final episodes for season 18 have now been filmed.

Fans of the series have seen the team battling the impact of the coronavirus pandemic as well as facing a whole host of action-packed cases.

To mark the completion of a very different season, Brian posted an image of himself outside what seems to be his trailer.

The actor is seen wearing a blue face mask whilst pointing at the door where his character’s name is seen, with the sun beaming down on him.

Captioning the picture in view of his 70,800 followers, the NCIS star wrote: “And that’s a wrap! Last day of work on @ncis_cbs season 18 for Jimmy Palmer and me today.

“It’s been an incredible ride to see these 16 episodes through production this year. It was made possible by a caring, hard-working, dedicated work family that kept one another safe during a worldwide pandemic.” 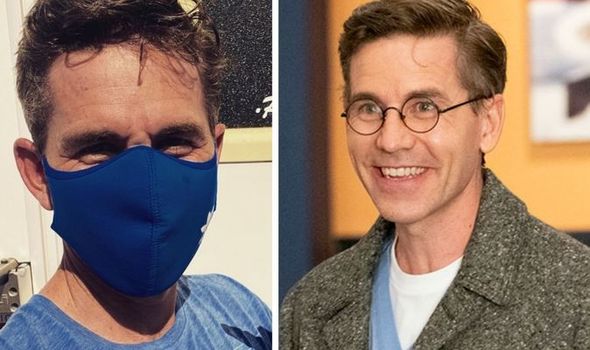 Brian continued: “We truly have the best in the business here and I’m feeling quite blessed to have had the ability for all of us to be together.

“Thank you to everyone for watching along the way,” he concluded but his followers wanted more detail on the show’s future.

One fan replied to the post: “Is the show renewed for season 19?” as no official announcement has been made by CBS.

“No official word yet,” the actor replied, before going on to tease: “I’m optimistic.”

The reply received 15 likes from his loyal followers, meaning there is excitement for season 19 of the long-running franchise.

Season 18 is the shortest run the CBS drama has had to date, with its predecessors containing 20-24 episodes each.

Sometimes with US shows, if a programme has a restricted number of instalments, this is because it could be coming to an end.

However, the shortened episode count was as a result of the pandemic, not because fans are gearing up for an outright conclusion.

DON’T MISS…
NCIS romance: Have any of the cast dated each other in real life? [ANALYSIS]
NCIS: Is actress Katrina Law going to take over from Mark Harmon? [ANALYSIS]
NCIS: Why did Emily Fornell star Juliette Angelo leave NCIS? [COMMENT]

In the meantime, Wilmer Valderrama, 41, who plays Special Agent Nicholas Torres has teased what’s to come from the season 18 finale.

The actor posted a picture of himself with several of his co-stars dress in rather dark tones.

And it hasn’t taken long for theories to emerge from the fandom that this could be because of a possible funeral scene.

Jimmy star Brian is amongst the cast members sporting a black-tie etiquette in front of Wilmer’s 1.8 million followers.

Captioning the image, the actor wrote: “Speaking of starting lineups…we are on the home stretch for our season finale.”

“(That’s all I’m allowed to say) #NCIS,” he continued and this sparked a flurry of theories as to why the characters have come together.

One fan replied: “Maybe Abby (Sciuto – Pauley Perrette) is coming back briefly and this crew was invited to her wedding and that’s why they are all dressed in black. Do hope it’s not a funeral maybe something good.”

Another posted: “@wilmervalderrama can you perhaps comment on Ducky’s (David McCallum) status going into season 19?”

Whatever happens in the season finale, it’s likely it will have huge repercussions for the team going forward.

NCIS season 18 continues Tuesdays on CBS in the USA.