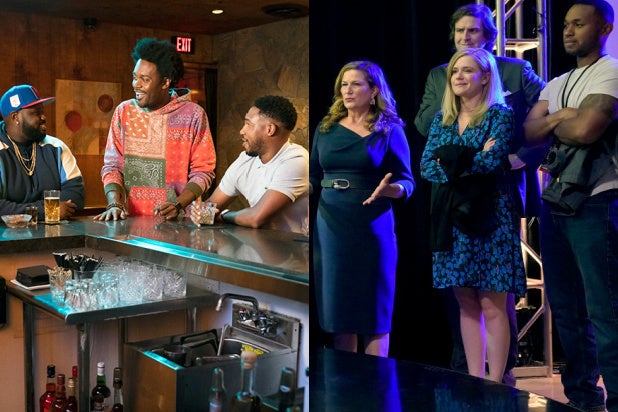 From Spitzer, “American Auto” is a single-camera comedy set at the headquarters of a major American automotive company in Detroit where a floundering group of executives try to rediscover the company identity amidst a rapidly changing industry. The show stars Ana Gasteyer, Jon Barinholtz, Harriet Dyer, Humphrey Ker, Michael B. Washington, Tye White and X Mayo.

Spitzer will write and executive produce the series alongside Aaron Kaplan, Dana Honor and Jeff Blitz, who directed the pilot.

“Grand Crew” is created by Jackson and is centered on a group of Black friends who “unpack the ups and downs of life and love at a wine bar.” The single-camera comedy’s cast includes Echo Kellum, Justin Cunningham, Carl Tart, Aaron Jennings and Nicole Byer.

Here’s the description for the Universal Television and Keshet Studios-produced series, per NBC: “When a massive sinkhole mysteriously opens in Los Angeles, it tears a family in half, separating mother and son from father and daughter. When part of the family find themselves in an unexplainable primeval world, alongside a disparate group of strangers, they must work to survive and uncover the mystery of where they are and if there is a way back home.”

“Our driving force has always been to seek out talented storytellers who have a strong point of view,” Lisa Katz, who was recently named president of scripted content by Rover, said in a statement Tuesday. “While these shows are very different thematically , what they have in common is a unique voice, excellent world building, and compelling storytelling. We can’t wait to share them with TV fans everywhere.”

Related posts:
Sean McVay: Where Does The Rams Coach Live And How Expensive Is His House?
The Truth About Ruby Rose And The Bachelor’s Demi Burnett
Popular News
Meet Amanda Gorman: Everything to Know About the Young Poet
20/01/2021
Man Utd wonderkid Ramon Calliste, called ‘the next Giggs’, now owns luxury watch business and makes £5m a year – The Sun
26/03/2020
Megan Thee Stallion Addresses Criticism Over Twerking: ‘I Love to Shake My A**’
26/03/2020
Police guard shops to stop coronavirus panic-buyers and enforce social distancing – The Sun
26/03/2020
Coronavirus: Good Morning Britain’s Dr Hilary reveals ‘game-changing’ self-testing kit
26/03/2020
Recent Posts
This website uses cookies to improve your user experience and to provide you with advertisements that are relevant to your interests. By continuing to browse the site you are agreeing to our use of cookies.Ok