POTUS’ attempts “put the bully in bully pulpit, but they haven’t shaken the soul of the First Amendment,” Lack writes in op-ed 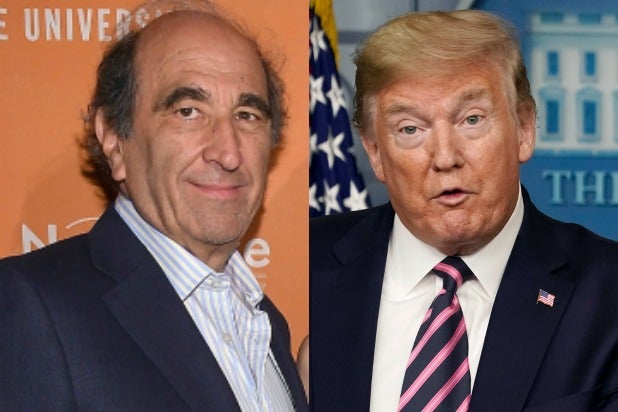 NBC News chief Andy Lack called out President Donald Trump’s attacks on the media amid the coronavirus pandemic in an op-ed published Monday., but said journalists are the ones “winning” this fight.

“President Donald Trump came into office railing against many of the foundations of our democratic institutions, including a free press,” Lack wrote in his piece, titled “Journalism is under attack from coronavirus and the White House. But we’re winning.”

“Forty months into his administration, coverage of the coronavirus outbreak is the latest sign that — contrary to conventional wisdom — he hasn’t laid a glove on serious journalism,” he added. “His attacks, most recently against excellent reporters like Jonathan Karl (ABC), Yamiche Alcindor (PBS), Peter Alexander (NBC) and Paula Reid (CBS), put the bully in bully pulpit, but they haven’t shaken the soul of the First Amendment.”

He added: “Trump’s daily briefings, which sometimes include pertinent and significant information, have also frequently become a sideshow, filled with false and misleading statements, compulsive boasting and self-promotional videos. That’s why with each live briefing, many news outlets, including ours, are aggressively fact-checking in real time, assessing the value to viewers minute to minute and cutting away when warranted.”

“Over the past four decades, I’ve covered a wide array of miserable catastrophes, wars and social upheaval, but the hallmarks of good journalism have seldom seemed more important than they do right now,” Lack wrote. “More than 300 million Americans are sheltering in place — with more than 26 million of them now unemployed — and they’re looking for accurate, updated information about this terrifying story and what may lie ahead. They’re looking to journalists to counter misinformation that endangers lives and livelihoods. And they’re seeking out the perspectives that give us hope: those of the extraordinarily brave nurses and doctors and public health experts on the front lines of this battle.”

“Reporters have been on this story from the start, tracking the spread of the coronavirus without fear or favor, faithfully doing their jobs even — and especially — in this perilous time,” the NBC News chief writes. “Every day, with every story, they try to find what is most relevant to the public and relentlessly work to uncover the essence of what it means.”

Lack concluded his piece: “At this dark hour, people are scared. They’re being bombarded daily by noise and information, not all of it correct — some of it intentionally divisive and polarizing. They’re hungry for accurate information and the straight, unvarnished truth. Now, and in all the days to come, journalists will be there.”