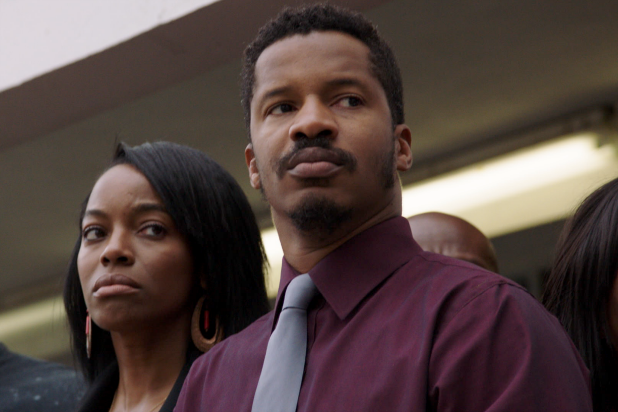 “American Skin,” the film written, directed by and starring actor Nate Parker, will land on BET+ next week following its premiere at the Venice Film Festival in 2019 and an on-demand run through Vertical Entertainment. The film will debut on the streaming platform April 15.

“American Skin” stars Parker and Omari Hardwick and follows a Black Iraqi War Vet, Lincoln Jefferson (Parker), who after being denied a fair trial following the shooting death of his teenage son by a white police officer, desperately seeks justice and accountability for his son’s death.

Parker is the director of “The Birth of a Nation,” which was released at the height of #OscarsSoWhite and won the top prize at the Sundance Film Festival in 2016 for its depiction of Nat Turner’s slave rebellion. It was bought by Fox Searchlight for a festival record $17.5 million and was expected to be a major Oscar contender.

But the film’s buzz was derailed after the resurfacing of rape accusations against Parker and his “Birth of a Nation” co-writer Jean Celestin in 1999, when he was a student at Penn State University. The two men were accused of raping a young white woman on campus and later starting a harassment campaign against her. Celestin was convicted, but Parker was acquitted, and the accuser took her own life in 2012.

Following the film’s premiere at Venice, Parker apologized for how he handled the resurfaced rape accusations, saying, “I’ve learned a lot in the last three years. It’s been a journey of wisdom — talking to people who are important to me, asking their advice, getting their support and learning more about myself, being introspective about the last three years, and I’ve learned a lot.”

Parker also received support from others in Hollywood, including Spike Lee, who has a “presented by” credit on the film.

“Nate is in here, he’s not hiding, he’s answered all questions, and we’ve got to move forward. That’s how I feel,” Lee previously said in 2019 at Venice. “It’s fruitless for me to say, this happened to Nate and this happened to other people. Can’t do that. This is only Nate’s second feature film. He has a lot more in him. That’s why I’m here.”

“American Skin” was a dud with critics, earning just a 37% score on Rotten Tomatoes. But it has a 95% audience score on the service.

“While BET+ is a platform for promoting Black stories, it’s also a place for championing Black culture and advocating for our community,” Devin Griffin, executive vice president and general manager for BET+, said in a statement. “When we first learned of the film’s ambitions, we knew it was something we had to be a part of. We were delighted to board the project early on as a production partner and are even more so now that our BET+ members can watch and experience this timely and poignant film.”

“BET+ played a pivotal role in getting ‘American Skin’ to market and we were thrilled to have a partner who understood the gravity and importance of bringing this story to life,” Nate Parker said in a statement. “My ambition with this film was to reflect the Black experience and to create a dialogue that adds context and accountability and allows us to push and change the narrative around race and justice in this country.”