TEARS pricked Janis Carter’s eyes as chimpanzee Lucy held her in the tightest embrace of their ten-year relationship – then turned and walked into the rainforest.

The final hug signaled the moment that Lucy – raised as a human in a bizarre experiment in the United States – found her independence, six long years after the pair arrived in Africa. 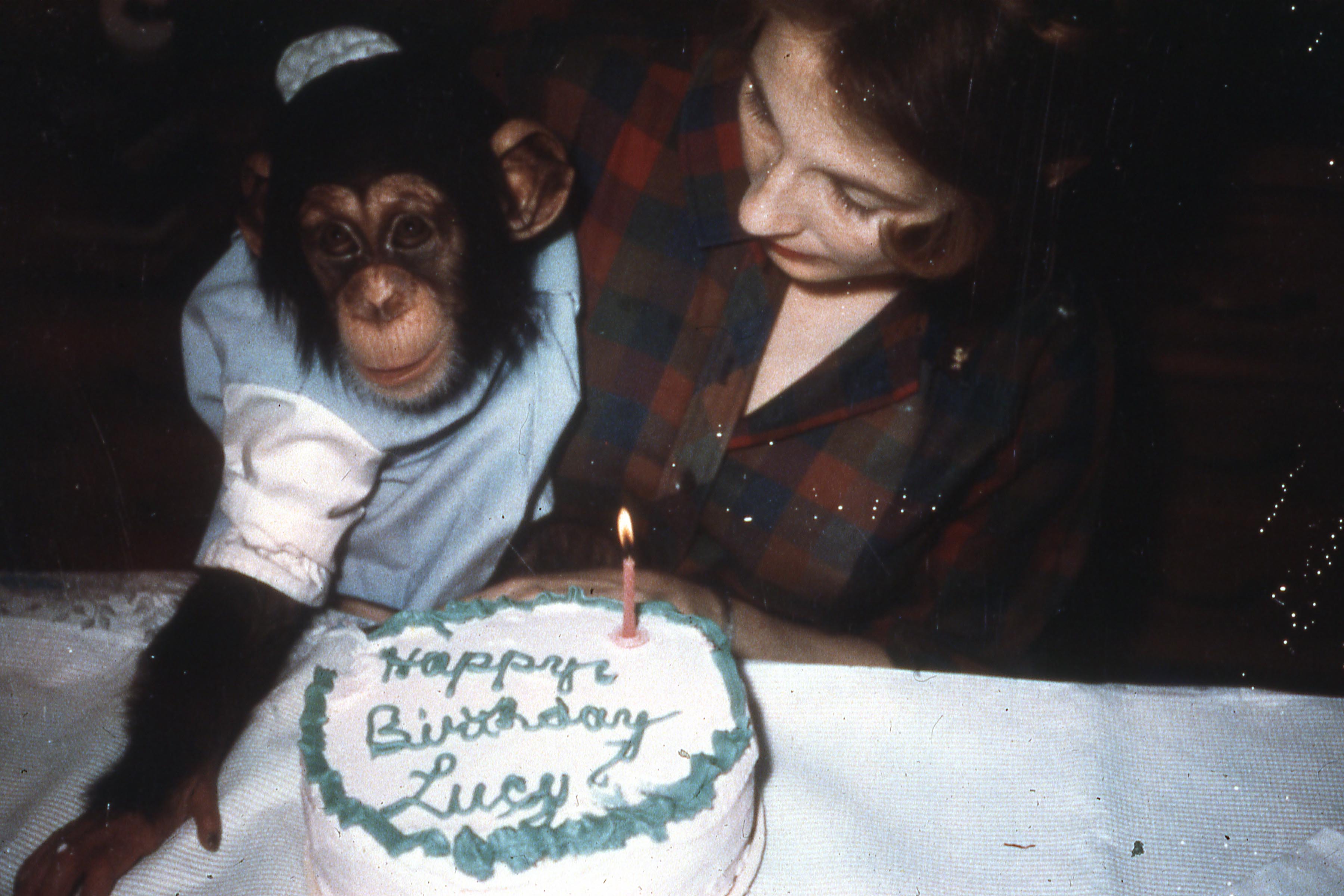 Lucy had been taken from her mother at two days old and raised as the “daughter” of scientist Maurice Temerlin and his wife Jane.

She slept in a bed, had coffee and oatmeal for breakfast and even mixed her own gin and tonics, squeezing the lime with her teeth.

But when she became uncontrollable, as an adult chimp, the Temerlins decided she needed to be integrated into the wild.

Janis, who had been helping to care for the primate, intended to stay three weeks but ended up staying for years, living alone with four chimps in a remote rainforest, surrounded by hyenas, leopards and snakes.

Drinking untreated river water from a bucket and sleeping in a cage while the chimpanzees urinated and defecated above her bed, Janis spent her days teaching Lucy how to forage for food and socialise with other chimps. 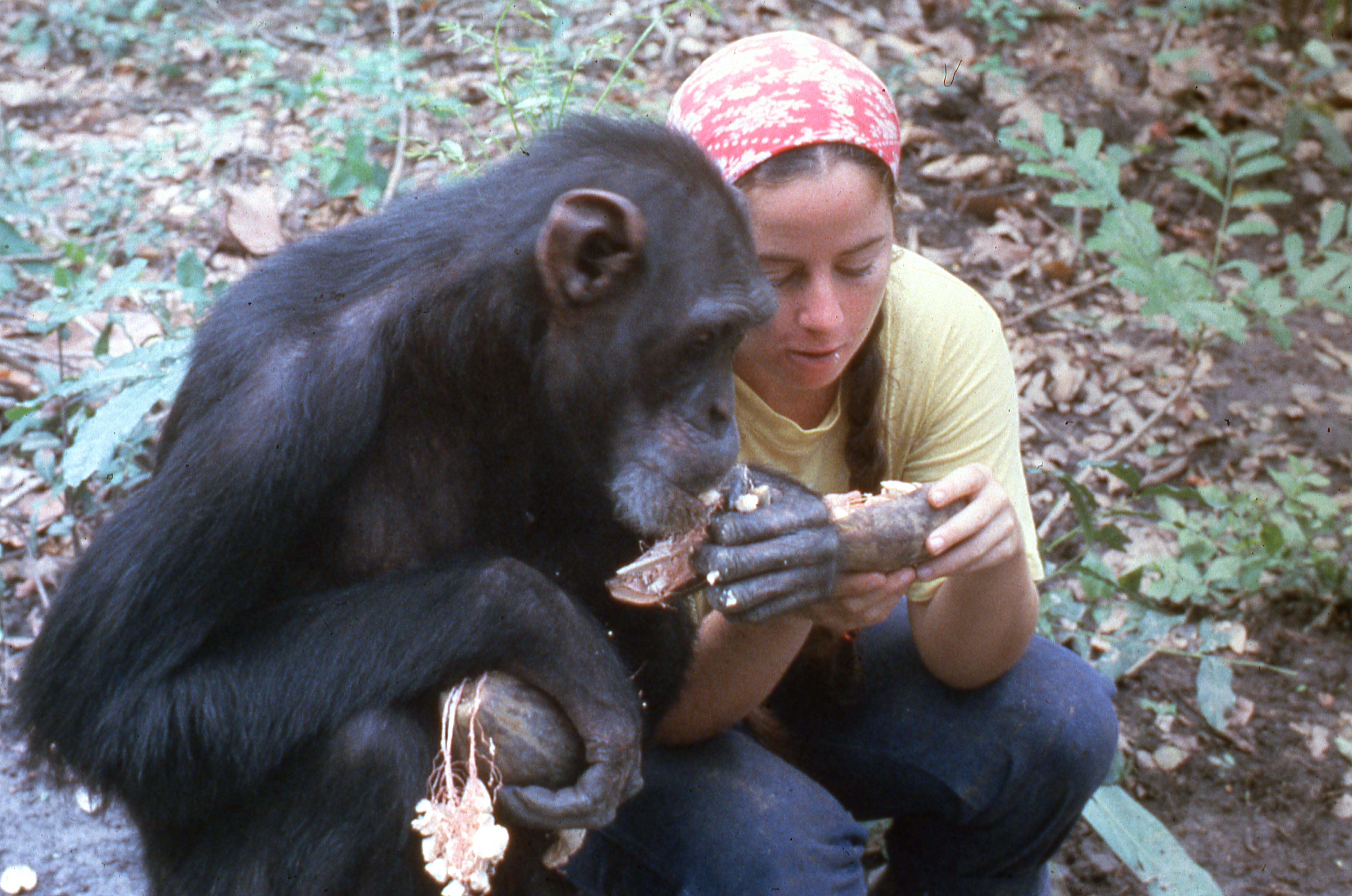 Telling her story for the first time in a new Channel 4 documentary, Lucy the Human Chimp, Janis, 70, recalls the bittersweet moment of that last goodbye,

“We groomed each other and talked, then she grabbed me and pulled me really tight,” she says.

“It was very intense, it was not like any other embrace we had had.

“It signified the life we had shared together. At the end of it, she got up, turned around and walked back to the other chimps.

“It had been so hard for so long but Lucy had finally made it.” 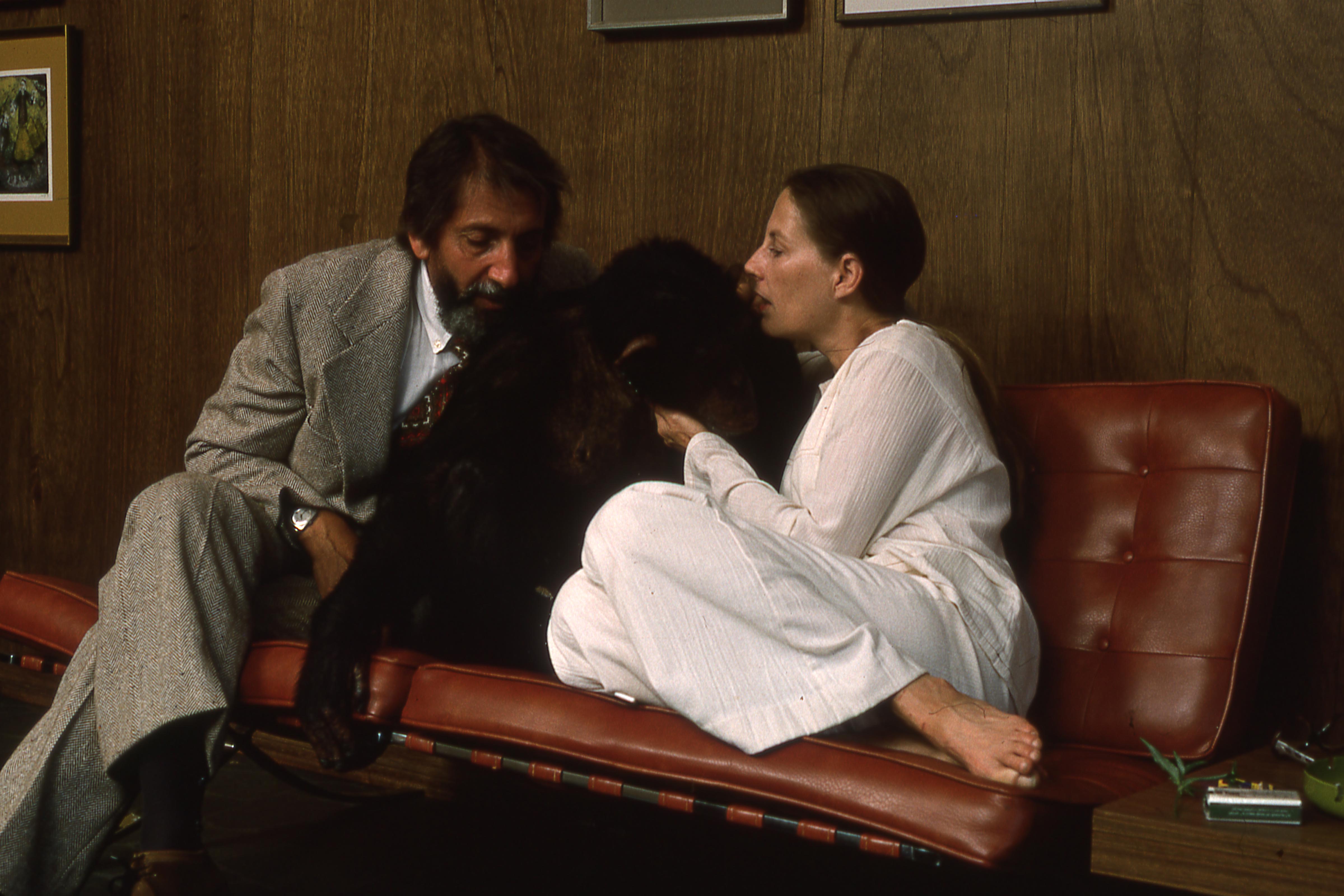 Janis was a 25-year-old student at the University of Oklahoma when she landed a part time job looking after Lucy, then aged 11, in 1976.

The chimp was born in a roadside zoo in Florida in 1964 and, two days later, her mother was drugged with a tranquilizer-laced cola before Lucy was taken from her arms and handed to Jane Temerlin.

In a nature vs nurture experiment, the Termerlins raised her as a human baby and given "every comfort possible.”

“After an eight hour sleep on a Beautyrest mattress she’ll have breakfast of coffee, oatmeal with raisins and a glass of orange tang," Maurice is heard explaining in archived recordings.

“Sometimes we drive around town and go to Dairy Queen and one time we went to a drive-in movie, which was playing Planet of the Apes. Lucy paid no attention whatsoever.

“In the evenings, she lays around studying herself with her favourite mirror and occasionally fixes a gin and tonic, squeezing the lime with her teeth.”

Some natural behaviour remained, with Lucy showing affection by “grooming” Maurice and Jane, who would respond in kind as a “bonding” exercise.

“It wasn't long before Lucy was no longer our experimental subject but our daughter, and we were all a family,” says Maurice. 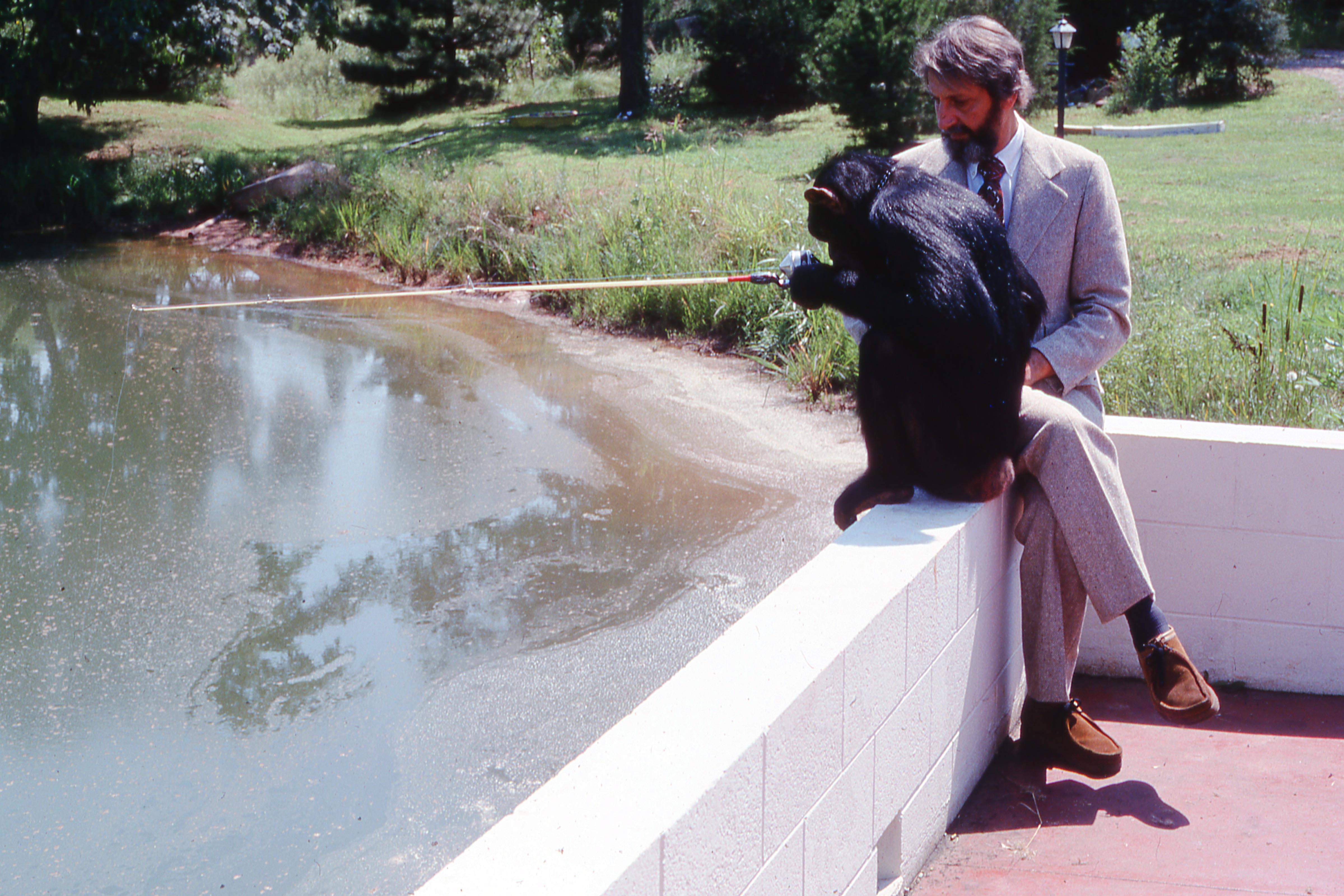 She learned to use the couple's keys to open the front door and escape – on one occasion raiding the neighbour's fridge – and would straddle male visitors to the house when she was on heat.

“Friends and family have become intimidated by her size and strength,” Maurice said at the time. “Most have stopped visiting altogether."

By the time Janis met Lucy, she had been moved to a cage in the garden and she was warned not to go to lean on the cage or stick her hand inside, in case of attack.

Having been taught sign language, Lucy had a vocabulary of 120 words but Janis struggled at first.

“She did try communicating with me but my sign language was not up to the point where I could understand,” she says.

“She was a very precise signer, a bit of a perfectionaist so when I asked her to repeat it she would roll her eyes like I was really dumb. She was very arrogant and condescending.”

After a while, however, Janis gained her trust and a breakthrough came when Lucy asked to be groomed by her.

“It was a very special moment for me,” she says. 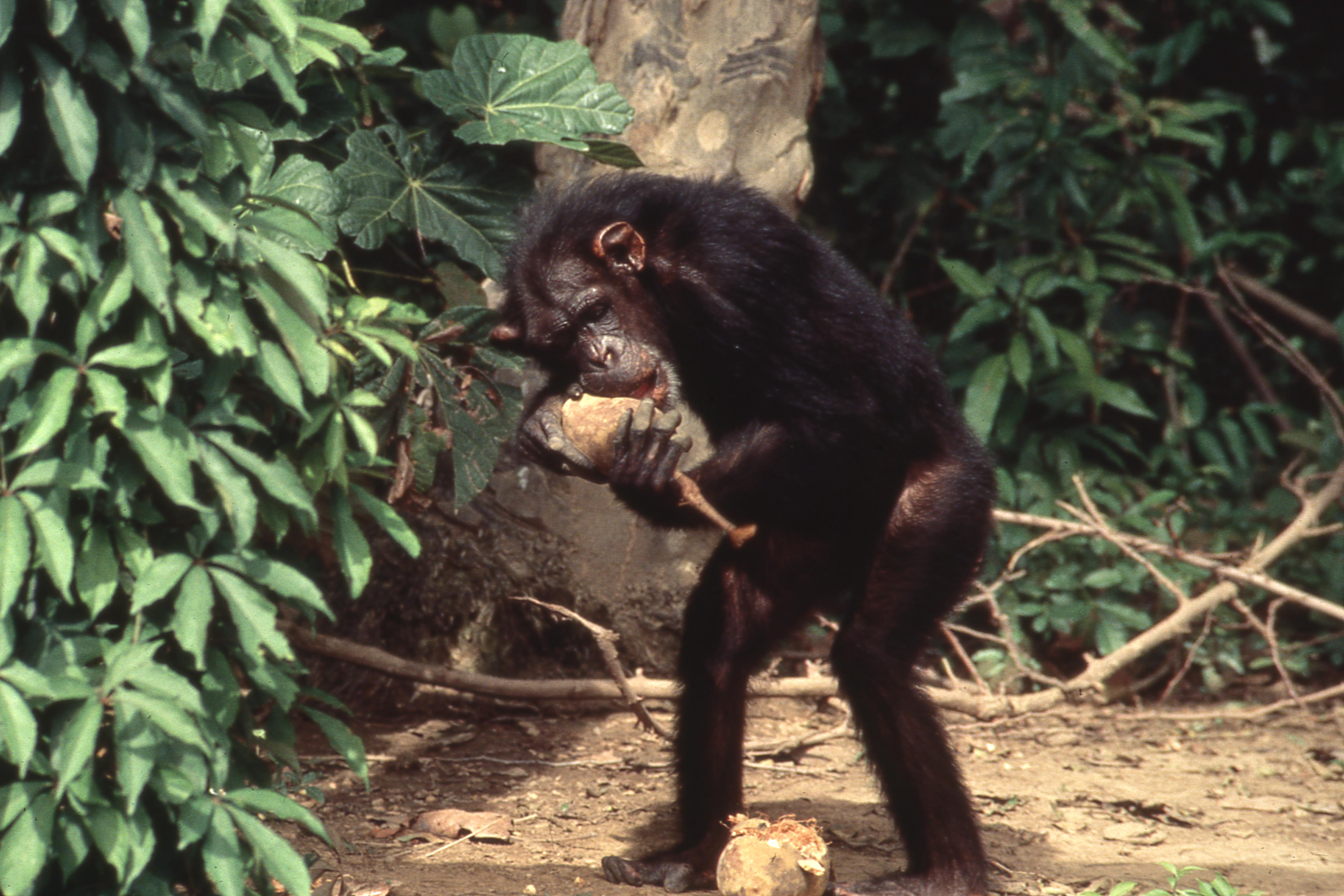 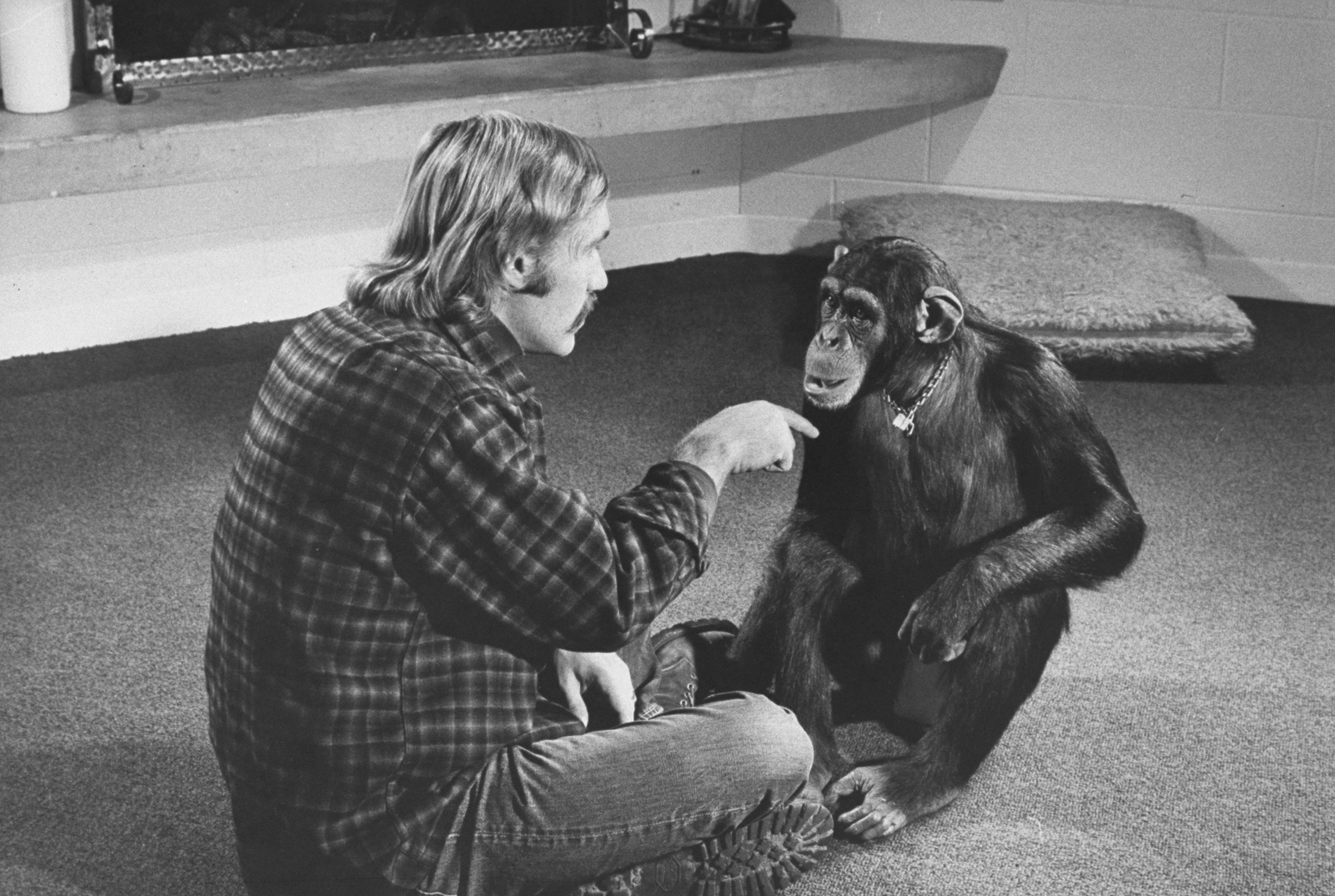 When Maurice and Jane decided to send her to her natural habitat in Gambia in 1977, they asked Janis to come along and stay for three weeks.

But when it became apparent that Lucy had been stripped of all natural survival skills, and was unable to fend for herself, Janis stayed with her, moving into a treehouse in the Abuko nature reserve.

She also adopted three orphan chimps – Dash, Lakey and Lily – and, when it was time for them to move to a more wild and remote rainforest island, in the Gambia river, Janis and Lucy went with them.

Alone on the island, with a specially constructed cage, a gas ring and no running water, Janis set about teaching her primate charges to forage for food and avoid predators.

“I was alone. It really did scare me,” she says.

“We were in a world we didn’t know, that we had to begin to get to know together.

“I had snakes around me all the time, cobras and puff adders. There were hippos and hyenas on the island as well – but I don’t think anyone told me about the leopards.”

While she slept in the cage the chimps slept on the roof, to be as close to her as possible.

“Every time a foreign sound woke them they would immediately urinate or defecate and that came down onto my bed,” she says.

“I drank river water from a bucket, after letting the dirt settle to the bottom. One time there was a dead rat in there and I thought, ‘I’ve just drunk from that. I did think to myself, ‘Jesus what am I doing?’” 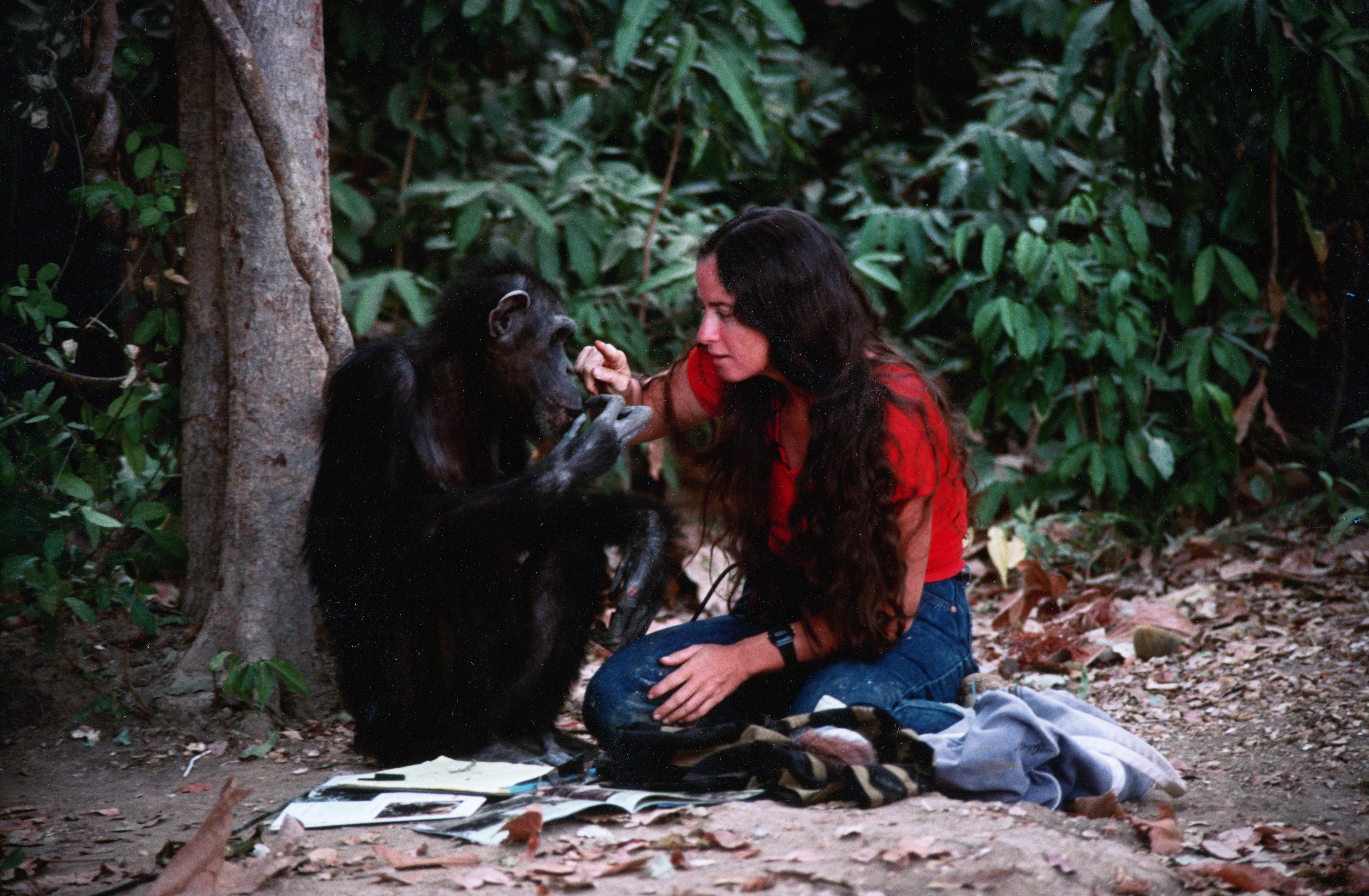 Initially, her only contact with the outside world was letters every six months, but she soon cut off all communication.

“I’d been so afraid to go to the island but the longer I stayed, the less I wanted to leave. It was the perfect paradise and I felt so lucky to have found that,” she says.

“I gradually drifted away from family and friends. I stopped writing and I stopped receiving letters from the outside world.

“I don’t remember being lonely. The chimps fulfilled all those human needs I had for social contact.” 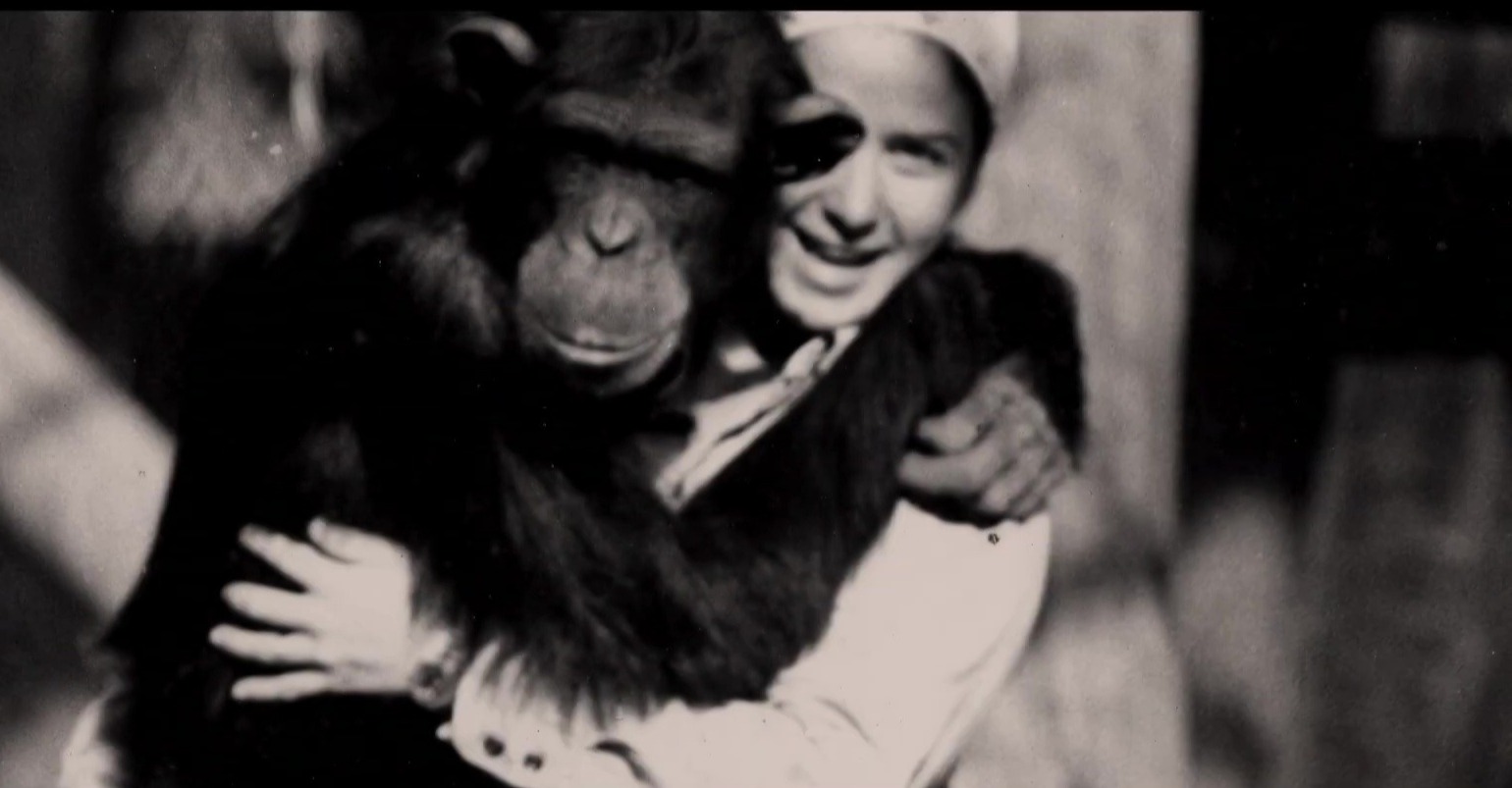 While the younger chimps quickly learned to forage, Lucy refused to try until one day, nearly two years in, when Janis lost her temper and shouted.

“I don't know if I passed out or went to sleep but when I woke up she was eating leaves,” she says.

“Lucy knew me very well and it’s possible she understood that I had reached my limit that day.”

However the toughest test was to come. In order to get Lucy to integrate with the group, Janis needed to break their emotional bond, so she pretended to withdraw her affection.

“I had to withdraw for her to feel empty enough for her to look for someone else to fulfill those needs,” she says.

“I knew it was impacting Lucy and she was feeling left out, ignored, forgotten and unloved but if I gave in she wouldn’t be able to realise what we all hoped which was to be independent and free."

The painful tactic worked and Lucy eventually began to lose the “neediness" and forage with the others. 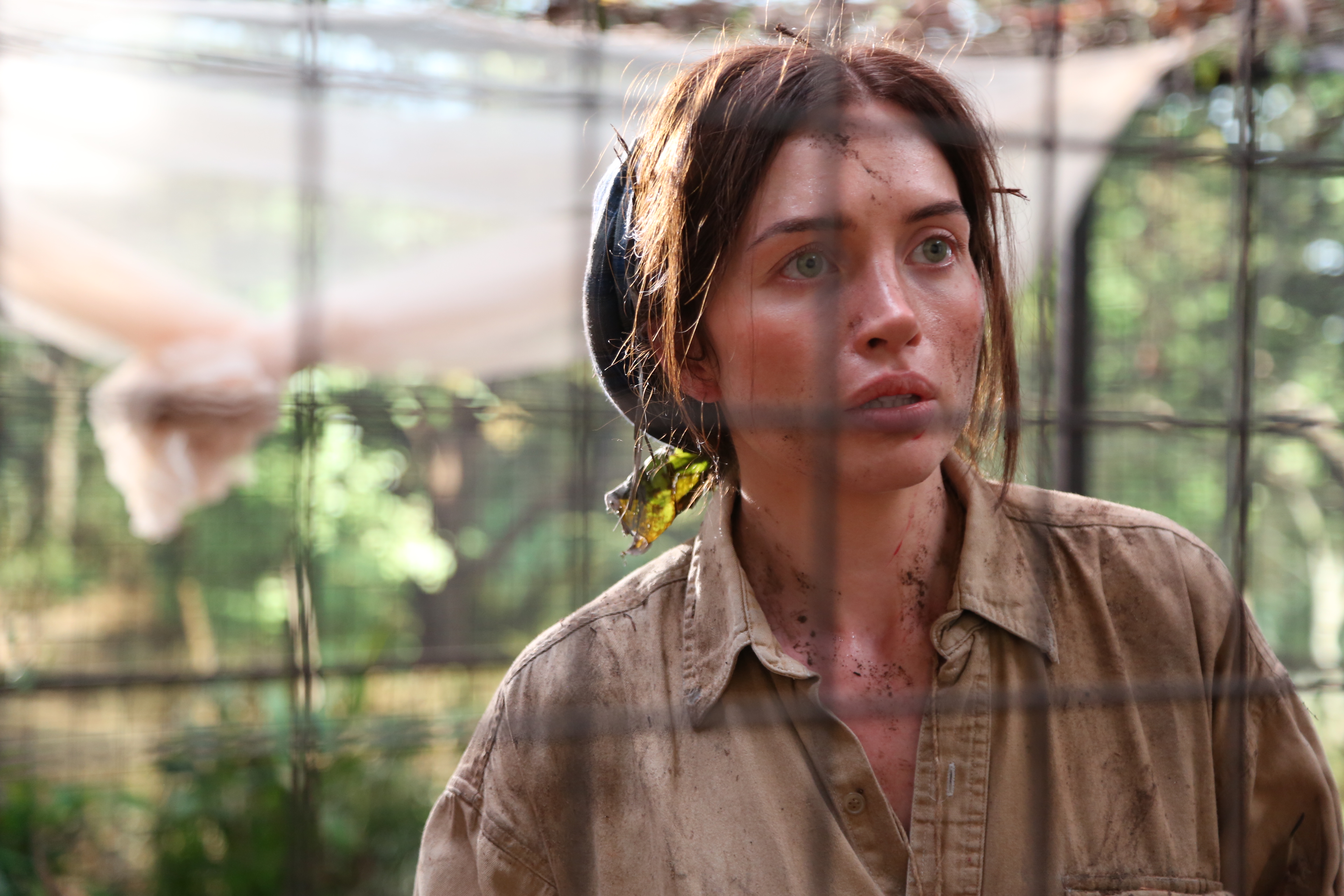 Attacked by Dash and dragged through thorns

With the chimps thriving, Janis knew her own time in paradise had come to an end when she was attacked by Dash – now a fully grown male and anxious to become the dominant member of the group.

He grabbed Janis by the leg and dragged her through the forest, finally letting go after she was pulled through a thorn bush.

“I was no longer the leader but a number two, who wasn’t going to be tolerated,” she says. “Dash would have slammed me if I tried to stay.”

Reluctant to move too far from Lucy, Janis set up camp opposite the island and a year later, returned to check up on Lucy – receiving that final emotional hug.

Janis stayed in Gambia, where she now runs the Chimpanzee Rehabilitation Trust.

In 1987, she had a dream that Lucy was boarding a plane, carrying a suitcase. “I knew that she was dead,” says Janis, breaking down in tears.

Lucy was buried on the island. Despite speculation that she was killed by poachers, the real cause of death has never been established.

Jane Temerlin tells the documentary that the news was devastating for them, and admits she now regrets the cruel experiment.

She says: “It was a terrible loss for all of us. I was so grateful to Janis for giving Lucy that time after us. She had some really good years and she wasn’t in a cage. She was protected and loved, and she had Janis.

“But I wouldn’t take a chimp from its mother ever again.”

Lucy, the Human Chimp airs on Channel 4 on Monday night at 9pm