LORD Alan Sugar is in hot water for spreading "fake news" on his Twitter account saying coronavirus was man made and started in China.

The entrepreneur shared the "dangerous and irresponsible" view from a Japanese professor named Dr Tasuku Honjo who argued COVID-19 was created by humans in a laboratory.

The post read: "Based on all my knowledge and research to date, I can say with 100 per cent confidence that corona is not natural.

“It did not come from bats. China made it.

"If what I say today turns out to be false now, or even after I die, the Government can withdraw my Nobel Prize. 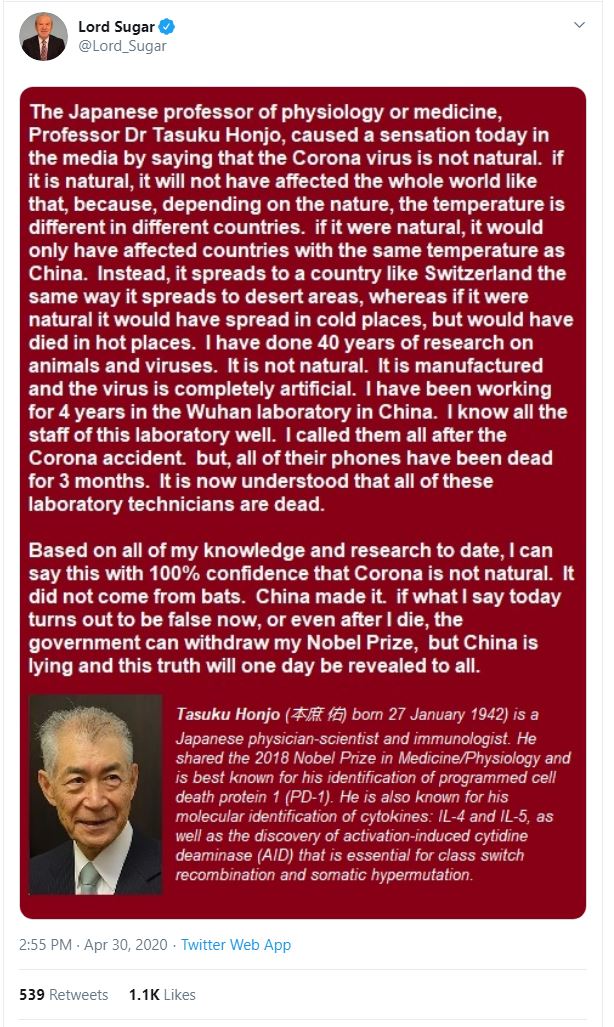 “But China is lying and the truth one day will be revealed to all."

The Apprentice star quickly copped a lot of flack for the controversial tweet with many followers simply writing, "you're fired".

Another Twitter user wrote: "You do know this is from a fake account don't you Lord Plonker? How terrifyingly irresponsible to have you in the British parliament."

Following the backlash Lord Sugar deleted the tweet and dodged responsibility for its contents.

Later he added: "Looks like, to quite Donald Trump, that was fake news…"

saying he's a “selfish, privileged billionaire,” who was trying to become a martyr of the Covid-19 crisis.

Lord Sugar said: “What’s going on is that I am tired of the tactics he is using to just big himself up, to give himself a name, to become a martyr.

“To become the new Florence Nightingale of Britain. It is so transparent it is untrue."