YOU know those laughs that cause you pain? The ones where you feel you’ll never be able to breathe again?

It happened to me when I saw the wedding dress shop vs food-poisoning scene in 2011 comedy Bridesmaids. 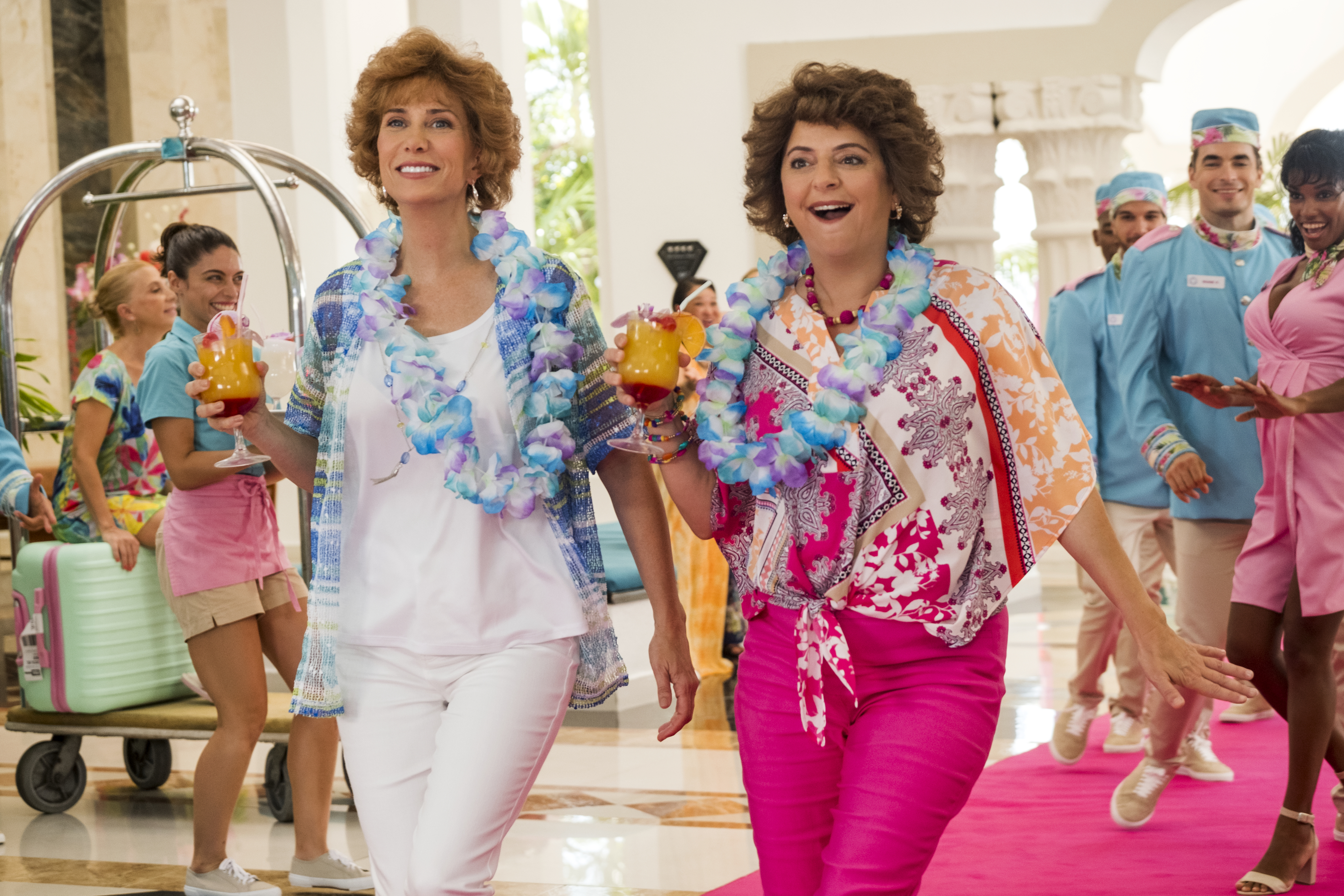 So I had my laughter lungs fully prepped when I heard the same writing team of Kristen Wiig and Annie Mumolo were joining forces to write and star in this new comedy.

Barb And Star tells the story of middle-aged, culottes-loving best friends Barb (Mumolo) and Star (Wiig) who are made redundant from their comfortable jobs in a sofa store in a small Midwestern town.

Jolted out of their cosy lives, the pair of single ladies decide to take a trip to Vista Del Mar in Florida for a holiday filled with sun, sea, sand and a lot of pastel colours.

But a murderous, underground villain — a female version of Dr Evil in Austin Powers — has a plot to destroy the area with a swarm of man-eating mosquitoes. 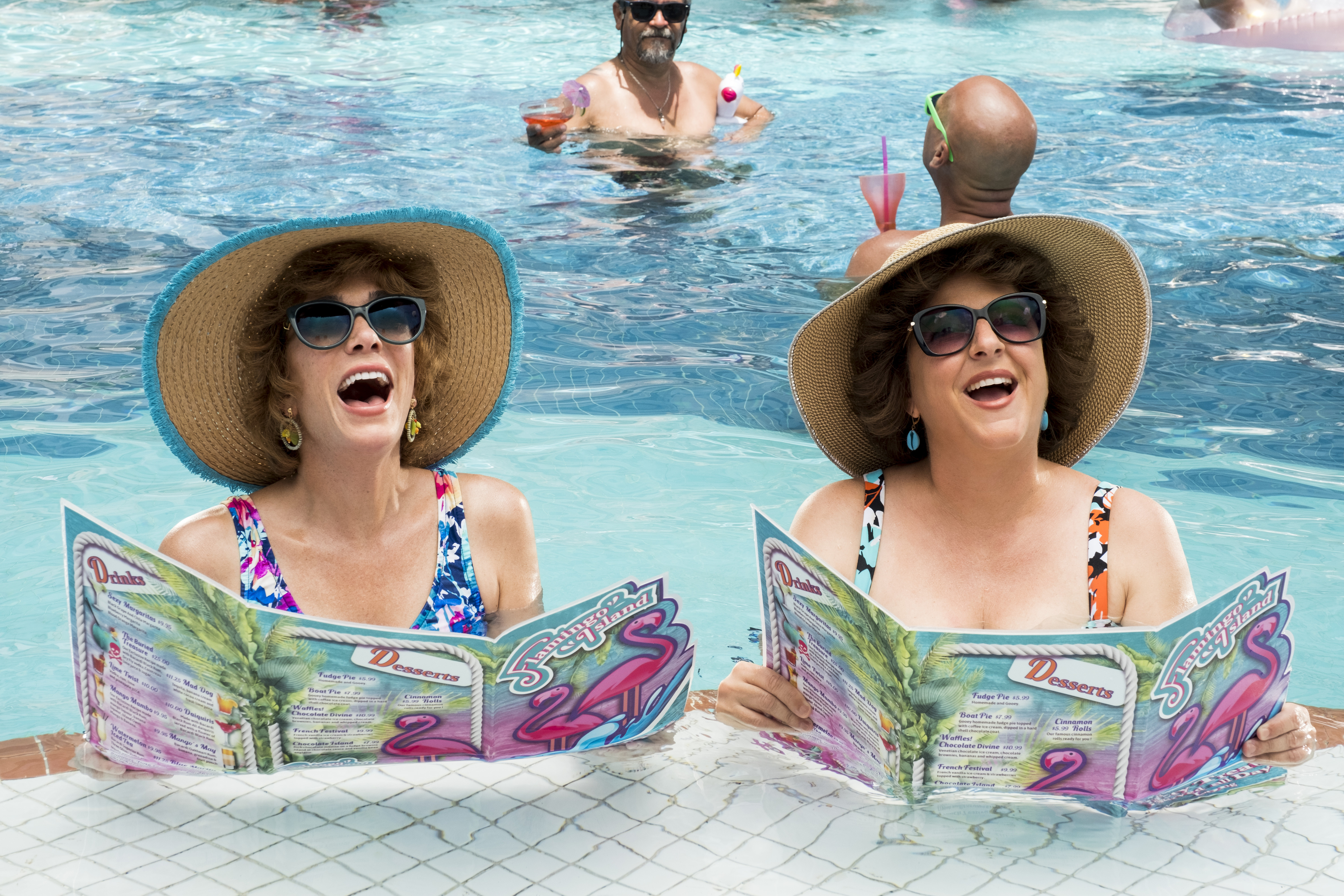 Yes, you read that correctly.

And our heroines have to stop her, turning Barb And Star into a completely surreal, often dream-like story.

Characters break into song and do group dance sequences, animals talk and play instruments, humans survive being shot from cannons and Fifty Shades Of Grey’s Jamie Dornan is the love interest.

You can almost hear Wiig and Mumolo goading each other while writing the script, saying: “Wouldn’t it be funny if . . . ” and then just going with it. 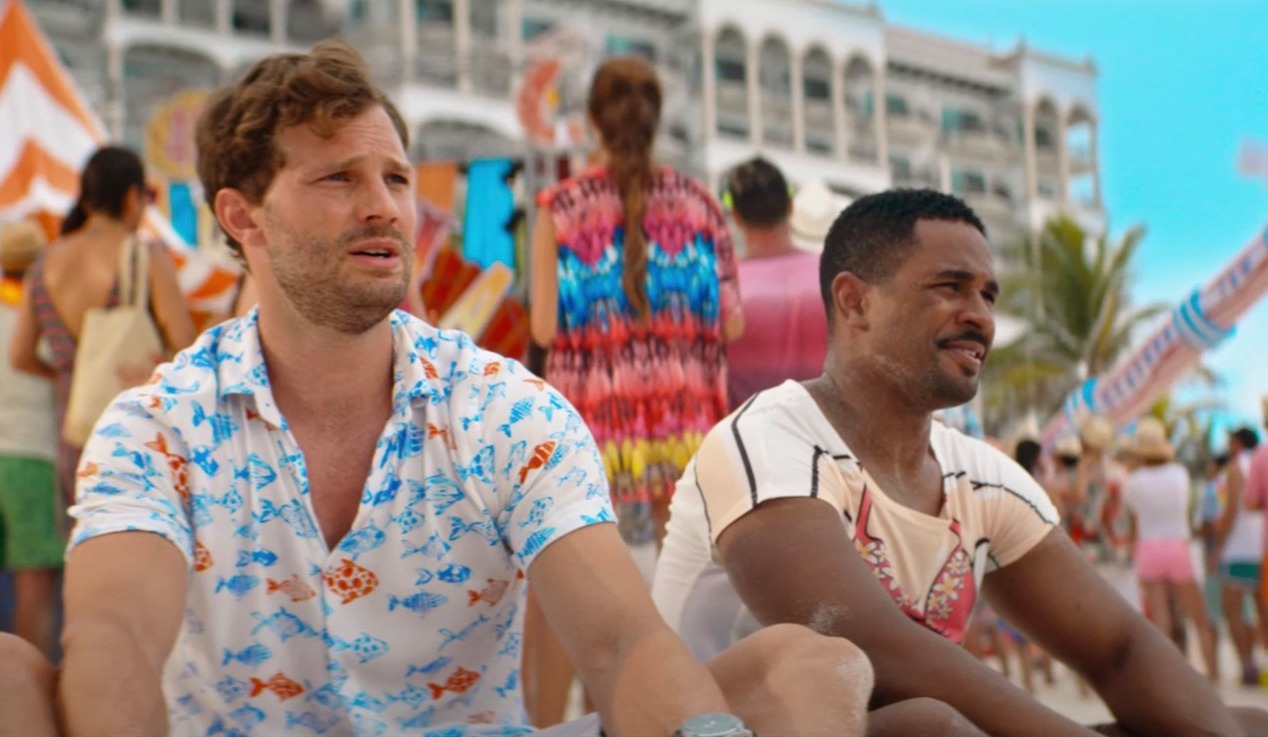 This makes the movie a little like an episode of comedy cartoon Family Guy.

There are several cutaways, and no joke stops because of the inconvenience of reality.

Away from this, with comic geniuses like Wiig and Mumolo at the helm, the film is smattered with classic moments.

Like the gently hilarious line when the pair lose their jobs and naively state: “This town is full of places that want to employ women in their 40s.” 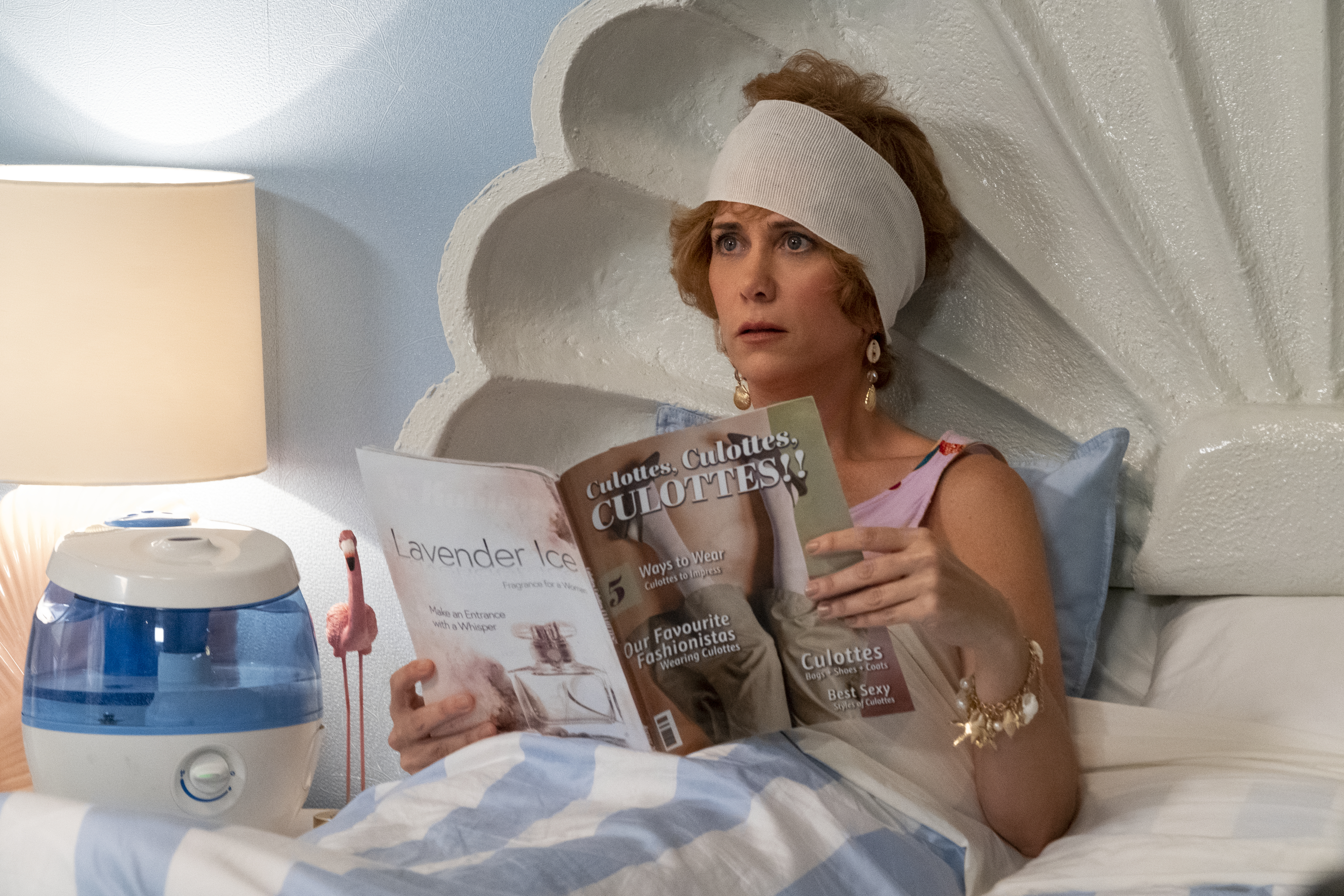 Or when they mistakenly call a company the name of sexually transmitted disease HPV.

There’s no doubt the duo are a comedy great, but with too many obscure moments interfering with the main story of female friends on a once-in-a-lifetime holiday, Barb And Star never hits the punchline hard enough.

CHILDREN aren’t having the best time of it currently, so they deserve a fascinating and fun-filled new film to keep them entertained.

Sorry, kids. This animation version of the much loved 1997 German novel of the same name will not alleviate the pain of home-schooling. 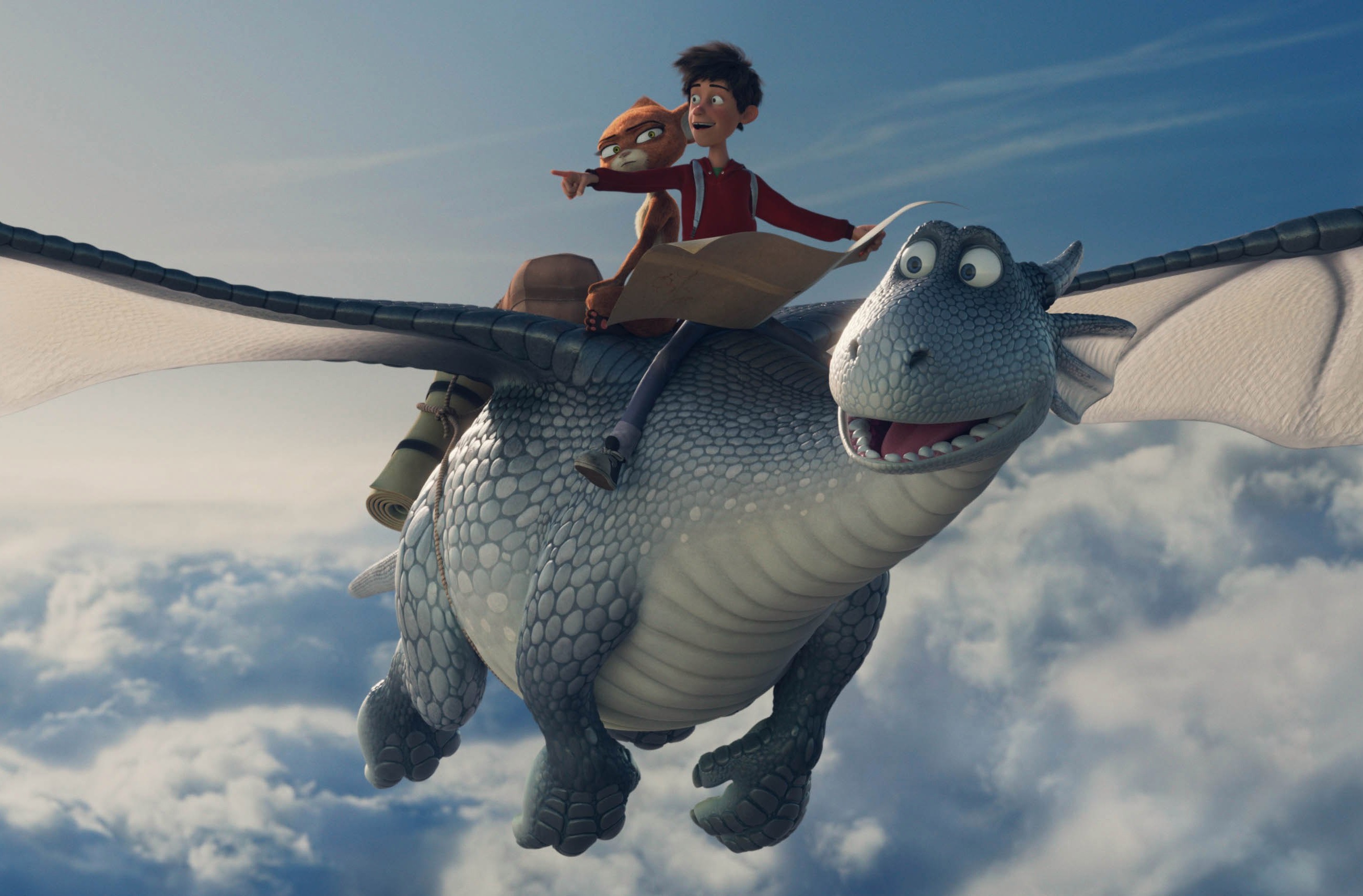 It is the story of Ben (Freddie Highmore), a homeless young man who is on the run after stealing some jewellery. He disguises himself in a dragon rider costume.

He then meets Firedrake (Thomas Brodie-Sangster), a dragon who is trying to find a secret paradise called The Rim Of Heaven.

Firedrake believes Ben to be a real dragon rider and, along with his friend Sorrell (Felicity Jones), the three go on a mission to find the land where dragons live in harmony.

It may seem strange to many that this film is not part of the successful – and excellent – How To Train Your Dragon franchise, as it is so very similar.

There are many matches with the original film, the design of dragons and humans looking disconcertingly alike.

But this is far inferior, and while the animation is decent enough and the always-superb Sir Patrick Stewart plays a dragon-eating villain, it may well disappear in a puff of smoke.

To All The Boys: Always And Forever

THE final instalment in this teen rom-com trilogy picks up on the youthful romance between Lara Jean Covey and Peter Kavinsky in their senior year of high school.

With Prom and graduation milestones coming up and college applications under way a transition to adult life is looming for our sweethearts. 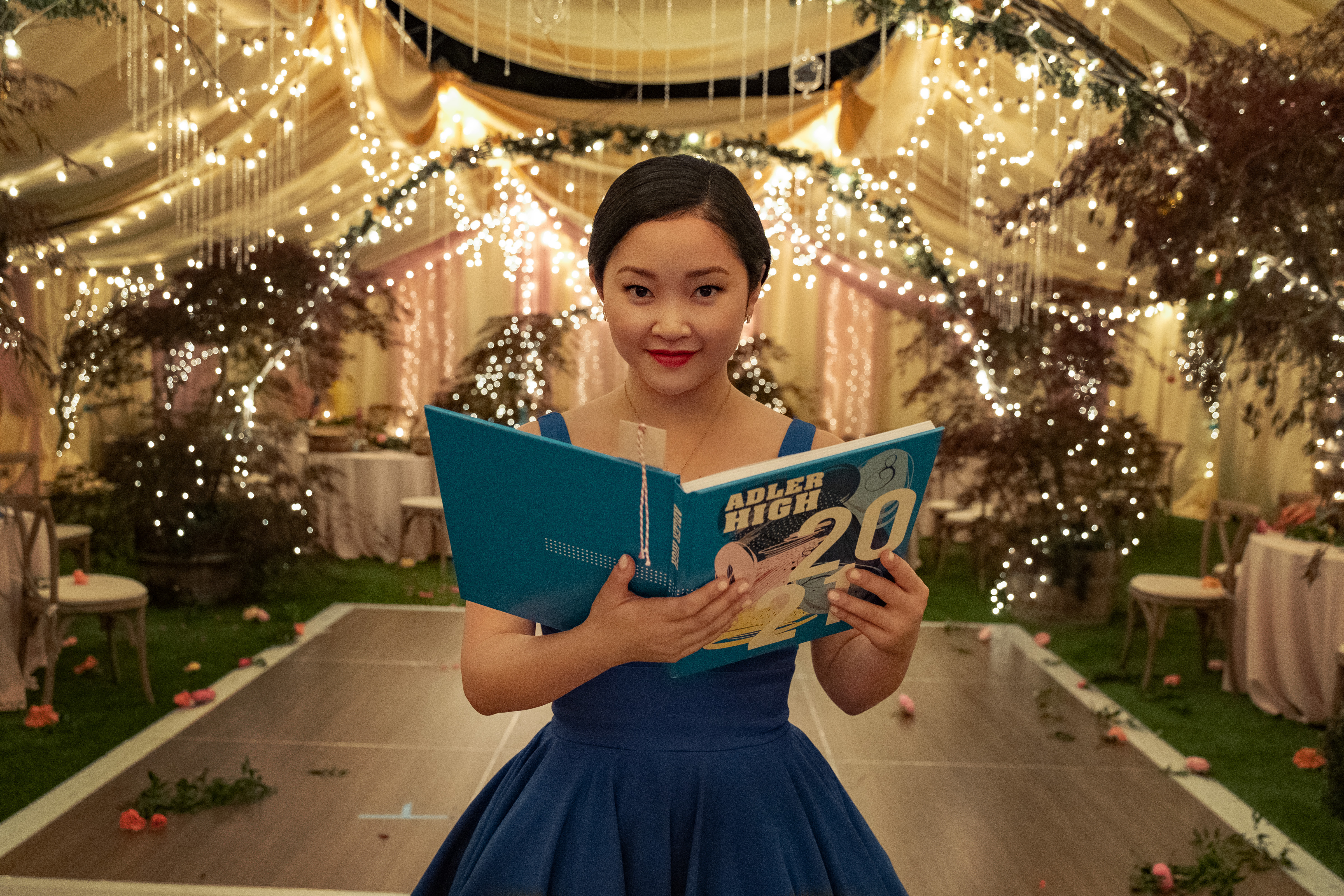 Lara-Jean (Lana Condor) and Peter (Noah Centineo) have decided to move on to higher education together but are about to discover the best-laid plans don’t always work out.

Lara Jean’s (LJ) college application is rejected, but Peter gets in. Can they survive long-distance love?

This loyal adaptation of the best-selling books by American author Jenny Han perfectly captures the essence of those rollercoaster coming-of-age years and should resonate with today’s teens.

The opening scenes shot in Seoul, South Korea, are a vibrant addition with cute K-pop touches.

Subplots involve the second marriage of LJ’s widowed dad (John Corbett) to their neighbour, and baby steps into a first holiday romance for her younger sister Kitty. So there is a relationship arc viewers of all ages can relate to.

Slick, wise, heartwarming and with a surprising – and excellent – ’90s soundtrack.