When “Killing Eve” began, its title’s threat, promise, or intimation (however you want to read it) felt immediate — as if in any episode, at any moment, intelligence officer Eve Polastri (Sandra Oh) could fall prey to the inventive assassin Villanelle (Jodie Comer). But such immediacy inevitably mitigated; success demanded extending their story, and the plot twisted itself into knots so the cat and mouse could work together (and two award-winning stars could share the screen). A forbidden romance became a dysfunctional relationship, and the enticement of inexplicable attraction turned into a confounding inability to explain why this cop and this killer are drawn to one another.

Season 3 wisely stops trying to explain it, but it also simplifies the story to an all-too-comfortable degree. “Killing Eve” has always been a procedural at heart, first as Eve studied Villanelle’s murders to get closer to her, and then as they teamed up to track down a new, unknown killer. As much as its serialized aspects made the BBC America drama out to be a new kind of crime show, the bones of a procedural have kept it alive. Serialization got everything twisted up, and procedure is the work of detangling. What’s left may not provide the anything-can-happen rush of early episodes, but for those happy just to spend a little time with their favorite ex-agent and ultra-assassin, “Killing Eve” Season 3 should suffice. For those looking to be wowed week-in and week-out, well, it’s just not that kind of show anymore.

To say much of anything about the first five episodes would send us into spoiler territory, so here’s what can safely be said about where Season 3 stands. For one, Eve is alive. As if there was any doubt following the would-be Season 2 cliffhanger, the bullet that struck Oh’s lead detective passed through her body safely enough to keep her breathing. Now, the former MI5 and MI6 operative is tearing up chicken gizzards and pinching together dumplings in the back of a restaurant, hiding from her former life as much as her former love.

Villanelle (Comer), meanwhile, is looking to be promoted. Her handler, Dasha (played by new cast member Dame Harriet Walter), helps facilitate a management training period, but anyone should be able to imagine why a solo artist like Villanelle might struggle caring for others. Still, Season 3 is another Villanelle-forward entry. Perhaps new showrunner Suzanne Heathcote recognized the enticing complexity of a remorseless murderer, or simply how brightly Comer shined with the added spotlight last year. No matter the reason, Eve isn’t just kept in the back of the restaurant — she’s taken a backseat in the show. Villanelle even gets a standalone episode at the season’s midway point, right after Eve’s most substantial moment yet. 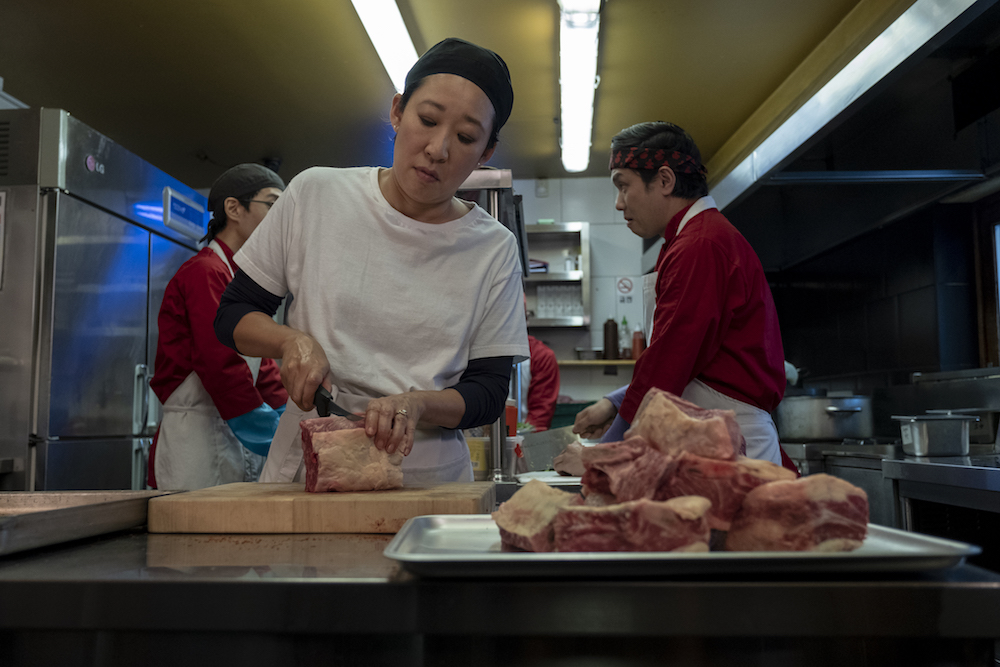 Most notably absent from the season’s first half are “Killing Eve’s” odd injections of fun. That leaves the two leads to invent the series’ trademark weirdness with their endless array of expressions and gif-ready reactions, which they can do, but the lack of creative dialogue and minor flourishes emphasizes Season 3’s familiarity and repetitiveness. Season 3 is built around another ongoing investigation (this year’s is revealed at the end of the premiere), and each episode tackles one clue at a time to tick forward the serialized story. Villanelle, meanwhile, still kills people — with the style and flair Comer carries so well — but these scenes serve as much-needed comic relief, their darkness evoking some of the strangeness found elsewhere in years prior. The series doesn’t spend any extra time explaining how Villanelle gets in or out of the various predicaments she oh-so-casually creates, which keeps her intriguing, borderline supernatural, mystique intact.

It also suggests “Killing Eve” could work just fine if it followed through on its title. Losing Oh isn’t the answer — Eve is half of the core couple, the eponymous lead, and the beating heart of an increasingly bloody narrative. But Oh has become more surprising than her character. She’s expressive, spunky, and the way Oh sits down is more memorable than plenty of her obligatory exposition. Eve doesn’t need to leave, but we’re either in for two or three more seasons of a prolonged, circular, cat-and-mouse chase, or the old Eve has to die so a new, more honest version can emerge. In Season 3, she’s still stuck in transition, while Comer lights up the screen and runs away with the story.

“Killing Eve” is a hybrid — a serialized procedural — and Season 3 tests how comfortable fans will be with a regimented structure. It’s perfectly fine entertainment, supported by two excellent performances. But if the series wants its edge back, it will have to go in for the kill.