Look, Bachelor Nation doesn’t have the best track record for lasting relationships. Please see: Peter Weber and Madison Prewett breaking up after two days. But! There are plenty of couples who’ve gotten together outside the franchise and had fully successful relationships—including Kaitlyn Bristowe and Jason Tartick, who are now engaged!

Jason was a contestant on Becca Kufrin’s season of The Bachelorette, while Kaitlyn was Bachelorette. So…how did these two even end up together? Shockingly, not on Bachelor in Paradise! Becca and Jason actually met in the real world without Chris Harrison plotting their relationship behind a rose bush, and their story is extremely cute. And honestly, extremely NSFW.

Kaitlyn and her Bachelorette fiancé Shawn Booth announce their split in a joint statement to Us Weekly:

Kaitlyn and Jason meet while recording an episode Off the Vine and there! are! vibes! Like, to the point where Jason straight-up asks her out and they go on TWO back-to-back dates. “She is a down-to-earth, beautiful woman who has a great sense of humor,” he tells Entertainment Tonight. “She seems very strong and knows what she wants and empowers women.”

And yes, they chronicle their first dates on IG: 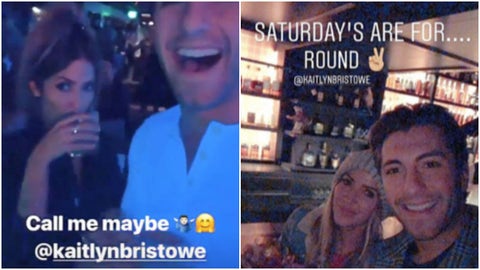 After just a few weeks, Kaitlyn starts referring to Jason as her boyfriend, saying on her podcast, “It’s actually so strange to go from being engaged to thinking of someone as your boyfriend because I feel like that’s taking a step backwards\—it’s not. It’s not. If anything, it’s taking a step forward because you’re just growing and evolving as a person. So, yeah…I mean…I would be upset if he was dating anyone else and I think he would be upset if I was dating anyone else.”

I know we‘re still in January but JANUARY WAS A SUPER BUSY MONTH FOR THESE TWO, OKAY? Anyway, here’s Jason confirming his ’ship with Kaitlyn on The Today Show. Warning: it cute.

The newly minted couple record an episode of Off the Vine and tell the NSFW story of their first hookup—which happened while Kaitlyn was on her period. “I was like, ‘Yo, let’s just dry hump.’ So we did. Literally, I had pants on,” she says, adding, “We were fully clothed and hot and heavy…in five minutes, he picked my nose and gave me an orgasm.”

Kaitlyn and Jason move in together!

And a few days later, this happens:

Jason and Kaitlyn show up to Jared and Ashley’s wedding looking CHIIIIIIIC:

Can I take a moment to mention that they absolutely nailed Halloween?

Jason and Kaitlyn get another puppy and take this incredible photo:

Need to find some cute dogs and a cute man to recreate this pic with ASAP.

Kaitlyn posts a full novel talking about how much she loves Jason while the rest of us have never felt more alone:

Kaitlyn makes it pretty clear that she and Jason are going to get engaged but tells Us Weekly she doesn’t want a quarantine proposal. “[It’s] the healthiest relationship I’ve ever been in and [an engagement] just feels like the natural next step,” she says. “I told him I don’t want to [have a] quarantine engagement. [I want] a little more romance than just at the house.”

Jason reveals that he turned down a chance to propose to Kaitlyn on Bachelor: The Greatest Seasons—Ever!, telling Entertainment Tonight, ““They actually came to me asking me if I’d like to take this opportunity to propose,” adding that there wasn’t “any pressure” and producers simply wanted to “make it special.”

Turns out, Jason decided against the idea because he didn’t want to propose on a night that literally was all about her exes. “We don’t need these stories to align in the same showing,” he says. “But I told Kaitlyn after…she’s like, ‘Thank God [you didn’t agree].’”

Jason and Kaitlyn both appear on the Behind the Rose podcast and basically talk about how amazing their relationship is, LOL. “We’ve talked about the fact that people have said that or maybe it has done something to relationships,” Kaitlyn says, discussing her time on Dancing With the Stars season 29. “It’s so different for each relationship and I just feel like we’re in such a solid place and have such a good foundation.”

Kaitlyn and Jason’s relationship is still going strong as she competes on DWTS, which is great! In fact, she’s doing so well that she already has an idea of what her and Jason’s celebration plans will be. Speaking with Jason during an episode of her Off the Vine podcast, she straight up says, “If Artem [Chigvintsev] and I win the mirror-ball [trophy], I will poke holes in your condom.”

Jason, on the other hand, is in the mood to take it a little slower. “In a perfect world, I would want you to be pregnant after we get married,” he replies. “The reason I prefer that we were married…I think that for my kids, not that it’s right or wrong — if things happen, they happen — in an ideal world, in a perfect case scenario, I think I would want my kids to be married before they have kids. The idea is that you have a fully committed partner, that you two have committed your lives and you gave each other’s vows to one another.”

Kaitlyn and Jason spend Christmas together…but not in an ideal scenario. The both of them unfortunately test positive for coronavirus and are required to quarantine together.

“Unfortunately, this is our Christmas card this year. We have Covid,” Kaitlyn shares on Instagram (via Us Weekly). “Jason and I had been trying to quarantine before seeing family. We thought we were making a responsible decision to have ONE person over, who had been tested daily for work. Negative tests 4 days in a row. The day we saw her, she became positive which we all found out the next day.” 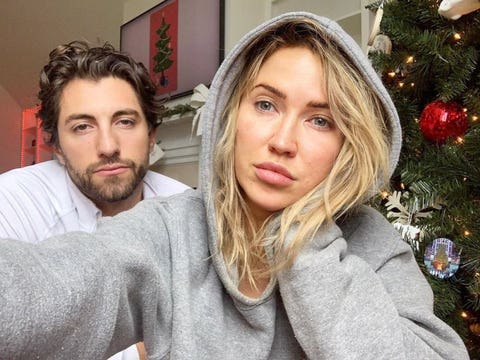 “Now, like many, we will spend Christmas by ourselves. We just want to let everyone know that we thought we were being safe, but covid is bigger than us. Today, We are thinking of everyone who is spending the holidays alone, anyone who is sick or overcoming something, (as 2020 has taught us to overcome a lot), and all of the healthcare workers who have been away from family, taking care of others for months, and months now. We will be ok!! Be safe and happy holidays!!”

Kaitlyn accidentally posts a photo of her posing against a background that says “Single AF,” prompting fans to believe she and Jason have called their relationship quits. The pic in question:

After receiving tons of worried comments, Kaitlyn thankfully clears up the hoopla in a series of Instagram Story videos—according to E! News, she says:

Jason takes the next step in his and Kaitlyn’s relationship—he proposes! Entertainment Tonight has all the deets, and spoiler alert: Their engagement story is so freakin’ cute. (Grab a tissue just in case, ‘mmkay?)

“Jason’s like, ‘Kaitlyn, we’re not doing a podcast.’ And I’m like, ‘You forgot to hit record, didn’t you!’” Kaitlyn tells ET. “He was like, ‘No, this is something else,’ and he got up and I saw him bring out a ring box from the drawer….I was trying to be present, but I was so overwhelmed and I was so embarrassed, because I was wearing a T-shirt that said, ‘Tequila for Breakfast.’ I was like, ‘This feels very on brand but also very inappropriate!’”

“It was everything I could have asked for,” Kaitlyn adds. “The words that came out of his mouth were insanely beautiful. We’ve never locked eyes like that in our lives. We were holding hands, so intense, and I was listening to his every word but still blacked out.”

A wedding is clearly in this couple’s future, so stay tuned!