When you reminisce about the glory days of teen movies in the late 1990s and early 2000s, it’s impossible not to think of Julia Stiles.

The actor rose to fame in movies like “10 Things I Hate About You” and “Save the Last Dance.” Along with her acting skills, Stiles also became known for accessorizing with chokers and donning cargo pants and camouflage when she was photographed. Stiles looked back on some of her red carpet looks with TODAY in January 2020 and, unsurprisingly, she has a few regrets.

“I think I wore that choker a lot in the ’90s,” she said of one look, adding, “I would tell her to smile, although it’s really annoying when people tell you to smile, but, like, enjoy it.” Like a lot of young women, she was indecisive on hair color: “I ended up dyeing my hair darker in weird streaks. It was very noncommittal. I couldn’t quite commit to totally being a brunette. Anyway, lots of glitter. Very ’90s. That was very trendy then. Then.” As for her beloved cargo pants, all she could say was, “Cargo pants. Why?” 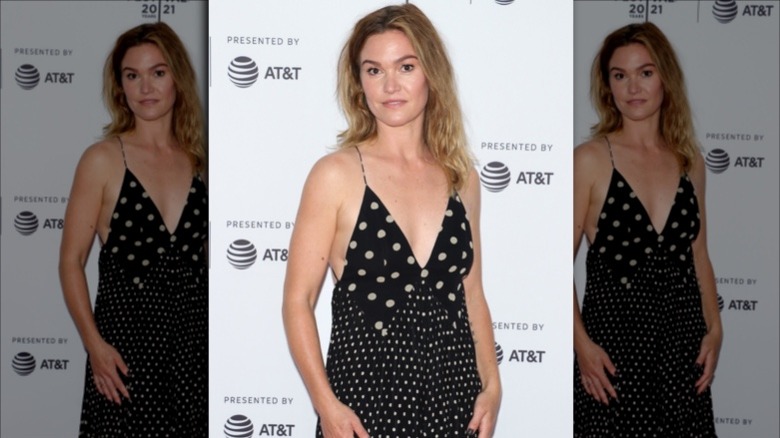 Is that really you, Julia Stiles? The actor debuted a fresh-faced look at the premiere of “The God Committee” and fans took notice, per the Daily Mail.

On June 19, Stiles donned a black and white polka dot dress with black heels at New York City’s Tribeca Film Festival and the look was a strong departure from her days of light blue eyeshadow, chokers and cargo pants of the early 2000s. She opted for minimal makeup at the event, but made sure to keep her tousled, signature blonde hair. We are sure her husband, Preston Cook, had his eyes on her all night long!

Stiles’ film involves an “organ transplant committee that has one hour to decide which of three patients deserves a life-saving heart,” per the outlet. Seven years pass and the committee “struggles with the consequences of that fateful decision.” According to Deadline, Stiles will also sit in the director’s chair for the first time with “Wish You Were Here,” a “romantic drama.”