Home » TV and Movies » James Cameron and the Cast of ‘Avatar: The Way of Water’ Hold Their Breath

James Cameron and the Cast of ‘Avatar: The Way of Water’ Hold Their Breath

The original was the biggest hit ever, but the sequel still took a long time to come together. How will it resonate in a different era of moviegoing? 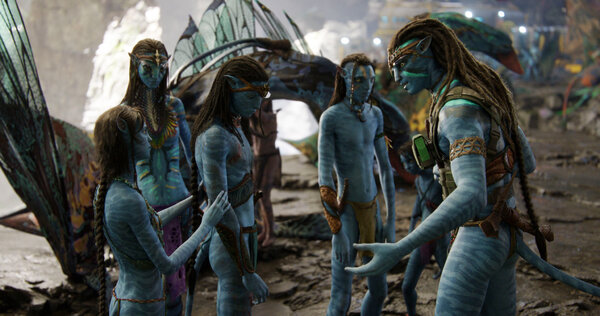 James Cameron knew the question I really wanted to ask about his new sequel, “Avatar: The Way of Water.”

“‘What took you so long?’ Let’s not beat around the bush,” the director cracked.

It’s a fair query, since after Cameron’s 2009 sci-fi adventure took in nearly $3 billion and became the highest-grossing film of all time, a follow-up that returned us to the beguiling alien world of Pandora was slow to materialize. Hollywood has changed so much in the interim that 20th Century Fox, the studio that financed “Avatar” and Cameron’s megahit “Titanic,” was acquired by Disney right after the sequel finally went into production in 2017.

So what did take Cameron so long? On a recent video call with his cast, he confessed to blowing off the movie for a few years while indulging his passion for deep-sea exploration. After constructing a submarine designed to take him to the bottom of the Mariana Trench, the deepest-known place on this planet, Cameron accomplished that goal in March 2012, even as his “Avatar” actors fretted.

“We kept thinking, ‘I hope he survives to make a new movie,’” Sigourney Weaver said.

And even when Cameron convened a writers room to map out a second and third film, “I just wound up with more story than I bargained for,” he said. A tale that was initially conceived to complete a trilogy came to span four more movies, which all required a considerable amount of preproduction: Writing those new movies took four years, and designing their different biomes, cultures and wardrobes took an extra five.

But “Avatar: The Way of Water” acknowledges that plenty of time has passed since the first film: In this installment, the soldier-turned-liberator Jake Sully (Sam Worthington) and his great love, the blue-skinned alien Neytiri (Zoe Saldaña), are parents to a brood that includes three Na’vi children, a human boy who becomes part of their coterie and an orphaned, teenage Na’vi played by the 73-year-old Weaver through the magic of motion capture. (This is a different character than the one Weaver played in the first “Avatar,” and one hopes that any potential confusion is mitigated by the casting decision’s irresistible boldness.)

“Avatar: The Way of Water” also adds new co-stars like Michelle Yeoh and Cameron’s “Titanic” lead Kate Winslet, and incorporated several deep-sea sequences that required the cast to film underwater while holding their breath for minutes on end. “You always walk away after an ‘Avatar’ journey feeling like you know more than you did before, and that’s exhilarating,” Saldaña said.

Do they feel pressure to replicate the stunning success of the first “Avatar”? “You can’t be a slave to the outside forces,” Worthington said. “You’ve just got to go to work and be fearless and as true as you can.” Still, Cameron is a realist: He has already shot the third film and a little bit of the fourth, but he knows that his ability to finish a five-film franchise hinges on the box office performance of “Avatar: The Way of Water,” due in theaters Dec. 16.

“If we make some money with two and three,” Cameron said, referring to the sequels, “it’s all mapped out. Scripts are already written, everything’s designed. So just add water.”

Here are edited excerpts from our conversation.

It’s not easy to follow up making the highest grossing movie ever, but James, you’ve now had to do it twice. What did you learn from the aftermath of “Titanic” that could be applied as you follow up “Avatar”?