How Tom Holland Seeks Revenge in ‘The Devil All the Time’

The director Antonio Campos narrates a look at his period drama featuring Holland and Robert Pattinson.

‘The Devil All the Time’ | Anatomy of a Scene

The director Antonio Campos discusses a scene from his drama featuring Tom Holland and Robert Pattinson.

“NARRATOR: Hi, I’m Antonio Campos, and I’m the director of The Devil All the Time. So we’re about 2/3 of the way into the movie, we’re entering the third act. And Arvin has been spying on this preacher and has figured out that he did something to his stepsister. And so he is coming to get revenge. And one of the things I wanted to convey in this scene is that Arvin isn’t a killer. He comes in with the intent of killing him, and in the moment when he’s going to shoot, he gets nervous and he sits down, and he’s got to muster up the courage to go through with the act. He’s a violent kid, but he’s not a killer yet. And so what I wanted to do is I wanted to try and give you two perspectives in this scene, one from the perspective of Teagardin talking to this young man that’s come in.” “You got time for a sinner?” Who wants to confess, get something off his chest, and the other, in close up on Arvin’s face, where we are with Arvin, where we’re with him, we’re seeing that he’s nervous, and that he’s a little anxious. “I’ve done lustful acts.” So we get this angle here, this close-up angle, and that’s where we’re in it with him, and we get to see into his eyes. And then there’s the frontal angle, and the frontal, we’re withholding his eyes. We’re seeing it the way that Teagardin sees him. The other thing there is this little technical thing— is Teagardin has seen Arvin in church with his grandmother and with his stepsister, but with his hat on, and the angle that he’s looking at him, he can’t quite identify him. So that’s the other reason why this wardrobe was really important for the scene. This is, by far, my favorite scene in the whole movie. And I was so excited for these two characters to come together. And for this force of good and this force of evil to finally meet. And it’s the beginning of what becomes Arvin coming up against a lot of different evil forces in the story. It’s a very long scene, so we really wanted you to feel every single beat. And so this scene took about— I think we edited this scene on and off for about nine months. “One day I got this girl in my truck and I drove her out to the sticks, and I had my way with her.” [SIGHS] “She put up a fight?” “No.” And it was really about trying to capture every single detail that these two great actors gave us. I really think that Tom Holland is the greatest actor of his generation. And I think he’s so natural, and he conveys such a wonderful humanity, but still manages to capture this kind of danger. And that Rob Pattinson is this kind of mad genius, and you don’t know what he’s going to give you on the day. And so I had this wonderful footage to work with. And it was really about trying to nail every little micro expression, every gesture. And by doing that, we create this kind of— we start building up the tension to the point where then Arvin stands up and, with standing up, he reveals his eyes and reveals his identity to Teagardin. “I’ve been watching your every move for the last couple weeks. You can’t get enough of that Reaster girl, can you? Is that how you did my Lenora, too?” And this kind of face off, here, was really— this is where it kind of, like, really finely tuned the editing to make sure that every little gesture, once the gun revealed itself, is dangerous for Teagardin. “Don’t do anything you’ll regret, son. Why don’t you put the gun down, and we can talk all about it?” So we really wanted to highlight each beat, and feel every time that Tom gets worked up and Teagardin gets scared. In the sound design, here, you really hear the rattle of the gun. “It was just like this— this Reaster girl.” You get the shake of Arvin’s hand through the sound of the gun rattling, which is one of these things that we didn’t plan on, but when we got into the mix, you really kind of— you realize you needed a sound to convey that sort of nervousness, to heighten the nervousness. ”—soul too?” “Look, I— I didn’t have nothing to do with that.” And then you get this sort of, like, this anger building up. So now Arvin, who came into the scene so, so nervous to go through with the act, is now getting angrier and angrier and angrier. And he’s building up the courage to either shoot or not shoot. We don’t know yet. We don’t know if he’s going to change his mind, if Teagardin’s going to manage to talk his way out of it. “I ain’t going to take the blame for no bastard child. It would ruin me, man.” My wife is the editor, Sophia Subercaseaux. She and I always loved every one of Rob’s deliveries here. “She was delusional. She’s crazy. That’s it.” “Or she was just lonely.” 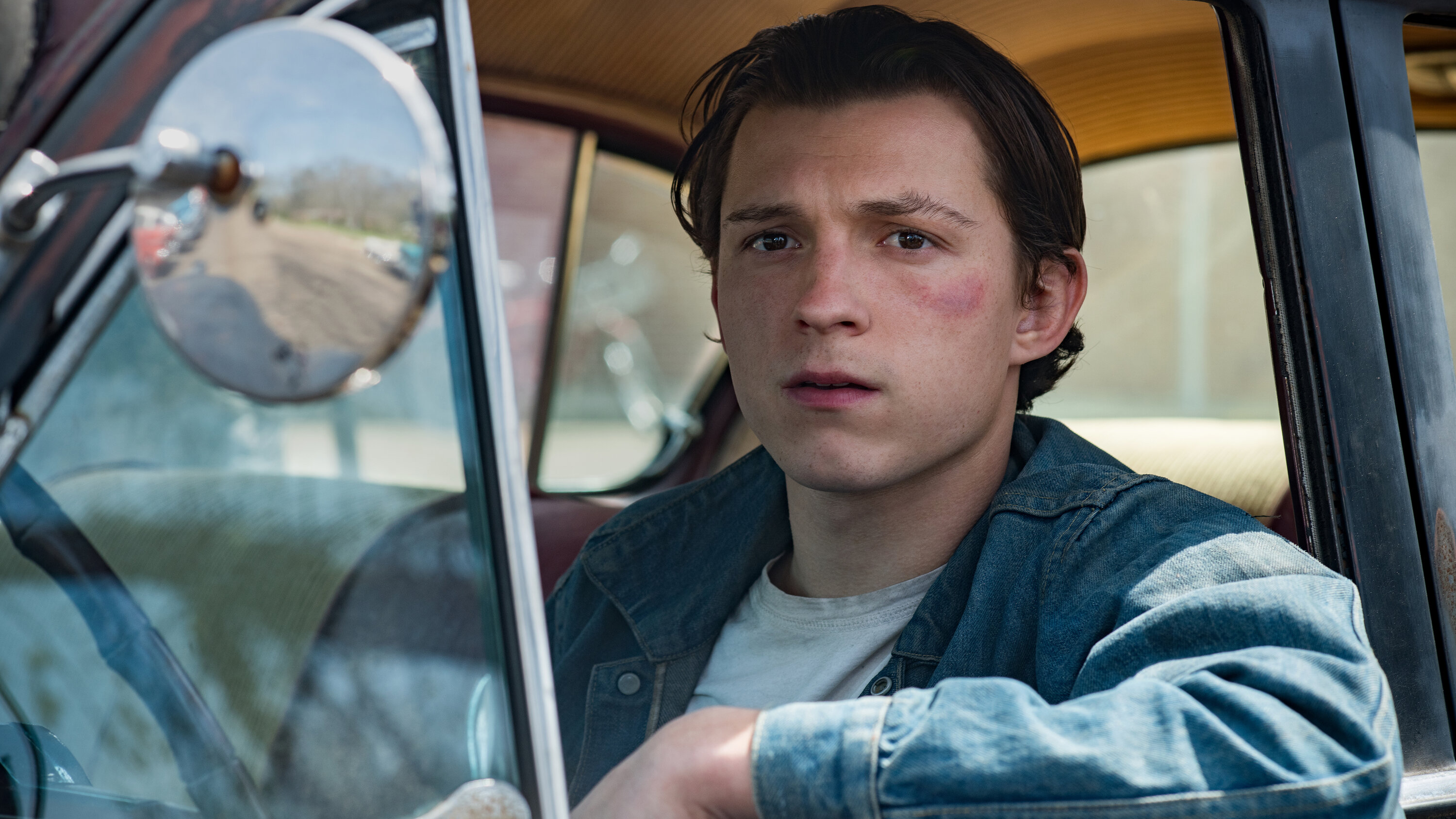 In “Anatomy of a Scene,” we ask directors to reveal the secrets that go into making key scenes in their movies. See new episodes in the series on Fridays. You can also watch our collection of more than 150 videos on YouTube and subscribe to our YouTube channel.

“You got time for a sinner?”

That line from the vengeance-seeking Arvin Russell (Tom Holland) is delivered with a sense of both weariness and foreboding. The weight of tortured souls confronting evil from all corners is at the heart of “The Devil All the Time,” the period drama that also stars Robert Pattinson as a not-so-faithful preacher.

Antonio Campos directed the Netflix film and, in this video, walks us through a scene that begins like confession but gives way to threats of retribution. The components are simple: two characters, a church and a gun. But those spare elements lead to an extended scene of both quiet nuance and sustained tension.

Campos talks about the challenges of pulling the scene off, both in the performances and in the assembling process. His editor, Sofía Subercaseaux, is also his wife, and he says they worked on this scene, on and off, for nine months to get it right.

He also discusses how sound design played a role in portraying a character’s nervousness (amplifying the clank of the shaking gun) and how certain camera angles help to tell the story from individual characters’ perspectives.

Read the “Devil All the Time” review.

Sign up for the Movies Update newsletter and get a roundup of reviews, news, Critics’ Picks and more.

Related posts:
Man shoos 13-foot 'Bonecruncher' crocodile in viral video
Here are 12 of the most incredible weight loss transformations of all time… and they need to be seen to be believed – The Sun
Popular News
Google Chrome’s new time-saving update will be worth the wait
24/10/2020
Man Utd wonderkid Ramon Calliste, called ‘the next Giggs’, now owns luxury watch business and makes £5m a year – The Sun
26/03/2020
Megan Thee Stallion Addresses Criticism Over Twerking: ‘I Love to Shake My A**’
26/03/2020
Police guard shops to stop coronavirus panic-buyers and enforce social distancing – The Sun
26/03/2020
Coronavirus: Good Morning Britain’s Dr Hilary reveals ‘game-changing’ self-testing kit
26/03/2020
Recent Posts
This website uses cookies to improve your user experience and to provide you with advertisements that are relevant to your interests. By continuing to browse the site you are agreeing to our use of cookies.Ok