Home » How The Mitchells vs. The Machines Went Beyond the Spider-Verse to Fight the Robot Apocalypse

How The Mitchells vs. The Machines Went Beyond the Spider-Verse to Fight the Robot Apocalypse

For first-time film director Mike Rianda (“Gravity Falls”), “The Mitchells vs. The Machines” (streaming Friday on Netflix) was like making 10 incredibly difficult animated features in one. That’s because the complicated hand-drawn aesthetic broke the CG pipeline at Sony Pictures Imageworks even more than their game changing “Spider-Man: Into the Spider-Verse.”

But it was all in the service of Rianda’s inventive debut about a dysfunctional family on a wacky road trip to save humanity from the robot apocalypse. In fact, because it emphasizes their weaknesses, you could call it his anti-“Incredibles.” “This is a very personal movie about my very weird family,” he told IndieWire during a recent interview. “And I wanted a movie where the artists have a say and the best idea wins. I looked at the watercolor illustrations by production designer Lindsey Olivares and I said, ‘Why can’t this movie look like that?’”

And so Rianda combined his childhood fascination with Saturday morning cartoons, cool robots, and tech for a very unconventional animation style with hand-painted textures over CG. “It took a lot of engineering,” he added. “At one point, our VFX supervisor, Michael Lasker, who also worked on ‘Spider-Verse,’ said what we were trying to do was weirdly harder. ‘Spider-Verse’ in some ways leans into the things that CG does so well. It’s sleek and cool, the edges have [Ben-Day] dot patterns. 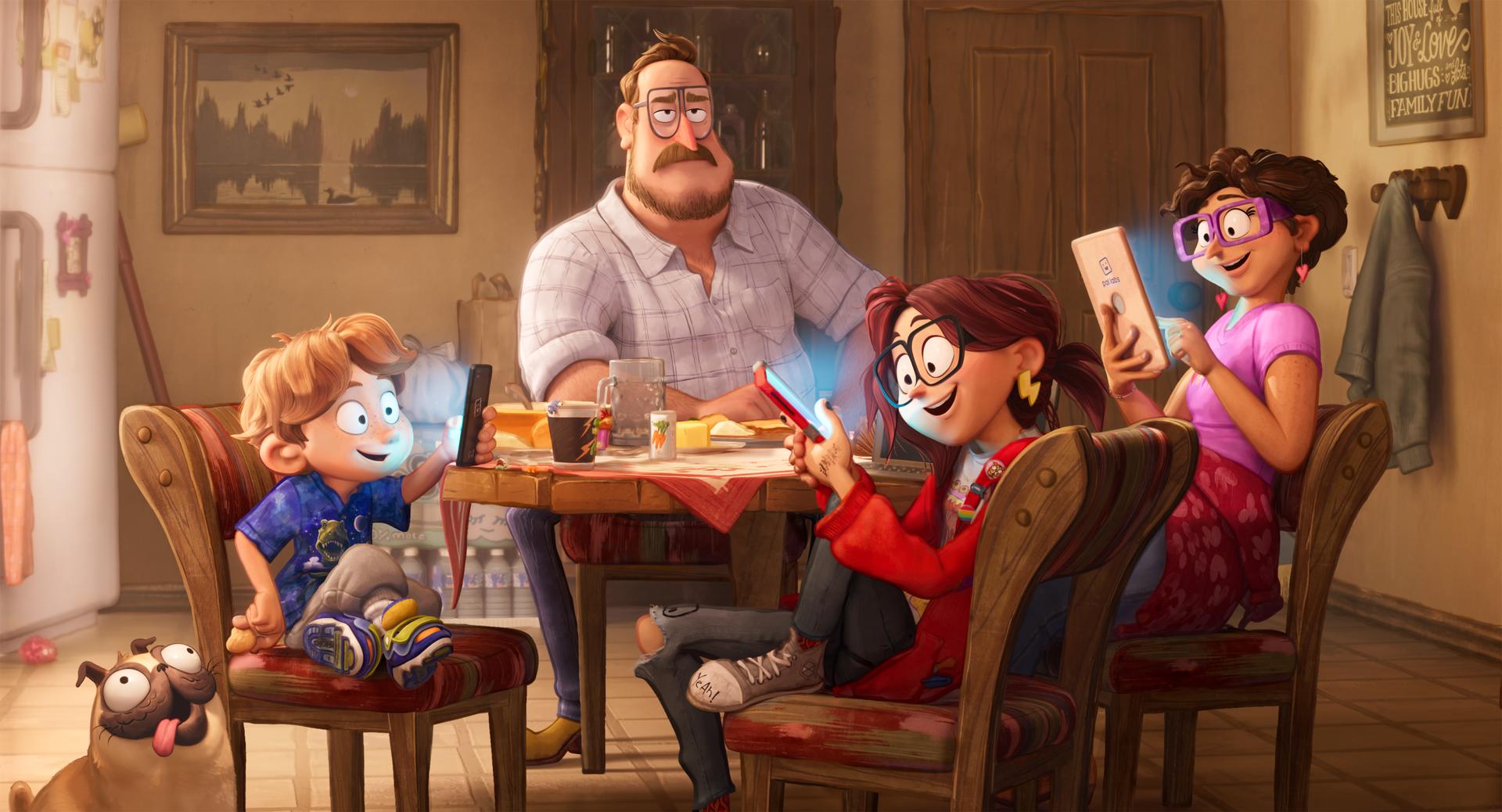 In “The Mitchells vs. The Machines,” quirky teenage artist and mixed-media filmmaker, Katie (voiced by Abbi Jacobson), constantly fights with her overbearing, nature-loving dad, Rick (voiced by Danny McBride), with her emotional outbursts conveyed in delirious 2D pop-ups (called “Katie Vision”). But when she’s headed for film school in LA, Rick insists on taking a cross-country trip, which turns into the week from hell when the world is attacked by an AI uprising led by the menacing, Siri-like PAL (voiced by a hilarious Olivia Colman). “It’s not anti-technology,” Rianda insisted. “But what is important about technology that is going to pull us together, or pull us apart?”

Early on, Rianda caught a break when “Spider-Verse” producers Phil Lord and Chris Miller were asked by Sony to check out his rough animatic. They were so taken by the Mitchells and the director’s inventiveness that they signed on as producers to help guide him and co-director Jeff Rowe (also from “Gravity Falls”). “We were blown away by it and that it was really funny and really sweet and really heartwarming,” said Miller.

But then “The Mitchells” was totally in their “LEGO Movie”/”Spider-Verse” wheelhouse of meta-cultural absurdity and boundary-pushing animation. “It’s so funny to try to get this very fancy visual effects studio to make a movie look like a young teenage woman drew it in her room,” added Lord. “But that was the idea. It was such a good fit for what Imageworks has gotten used to doing and what we like to do. And what Mike is great at is giving it a real personal, hand-made touch.” 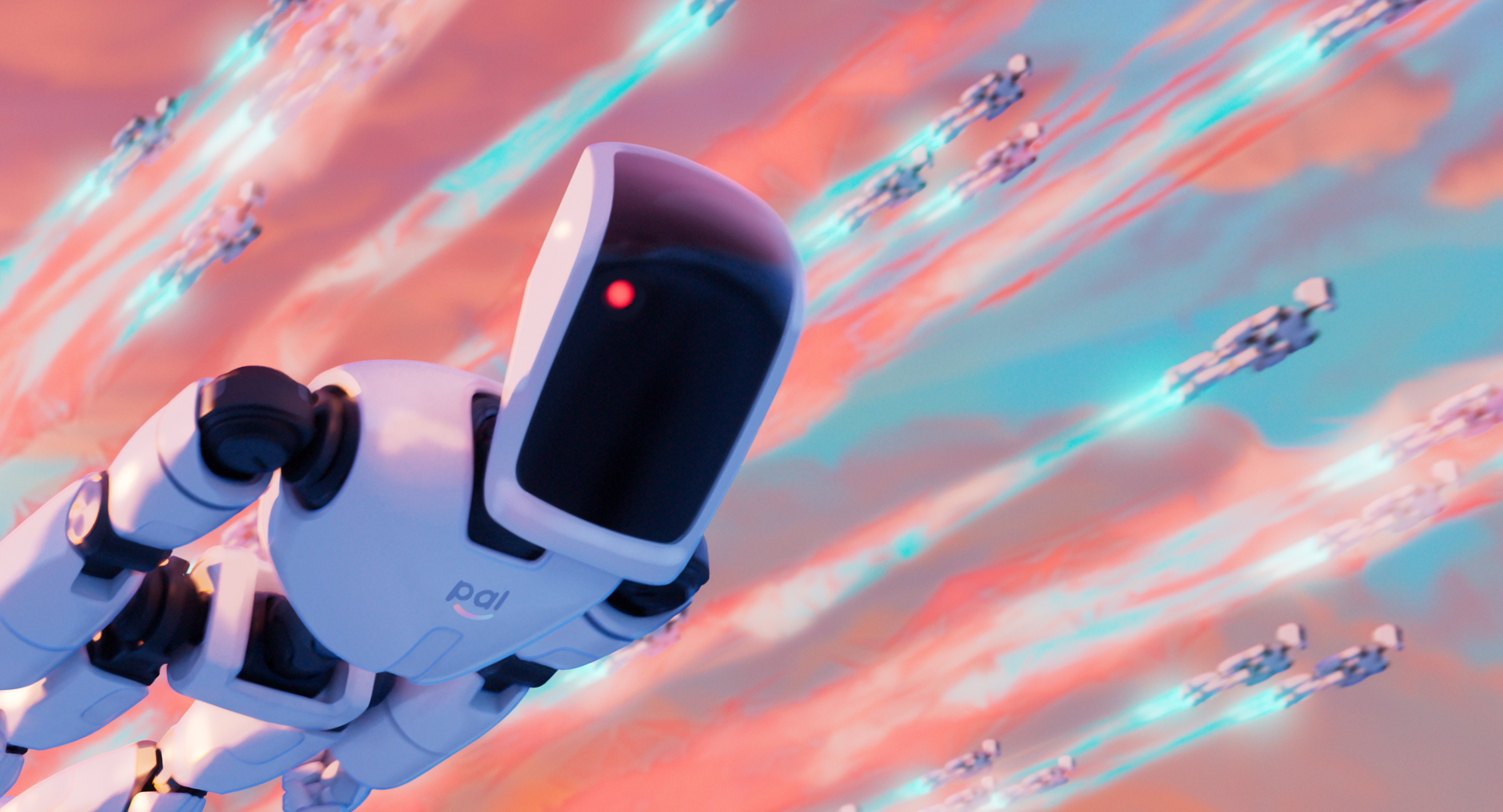 The Sony team leveraged “Spider-Verse” tools in addition to creating new ones to juxtapose painterly/watercolor elements with crooked lines from the human world with the clean, calculated perfection of the robot world. “They brought in a person who invented a line tool that had AI learning in it so they got better at continuing to put lines around characters so it felt more organic,” Rianda said. “They said give us an image that’s exactly what you want. and that took a long time to get all the charm of these drawings along with the lighting and beauty of the real world. Then they broke it apart into different levels to reproduce it. The watercolor textures run throughout all of the backgrounds, so we needed to develop a new watercolor tool.

“There’s all this simplification we needed to address in the computer,” added Rianda. “It was a different mindset for the animation team. We wanted to wipe away the detail [in the hair, in the trees] and that was counter-intuitive to computer animation. We blew out the sky, which mirrored natural light in the human world. I remember one of the artists telling me that we needed to get the trees right. And if we didn’t, the whole movie wouldn’t work.”

By contrast, for the robot world, the team went for gouache look with color gradients. “The human world looked like a mess and the robot world looked incredible, and it was another instance of making bold choices,” Rianda said. “There’s this room and it’s sheer and you can see a reflection in it. Then to make it look like it belonged in our movie, we added hand-drawn reflections. We took the tools and made crazier choices.”

Speaking of robots, the most inventive animation was created for the killer Stealth bots by breaking them apart into polygons and having them move by reforming. “Alan Hawkins [head of character animation] got really excited about that and broke the pipeline with new rigging and shaders,” Rianda said. “This crew decided they were going to make them look really stupid and really cool at the same time,” added Lord. 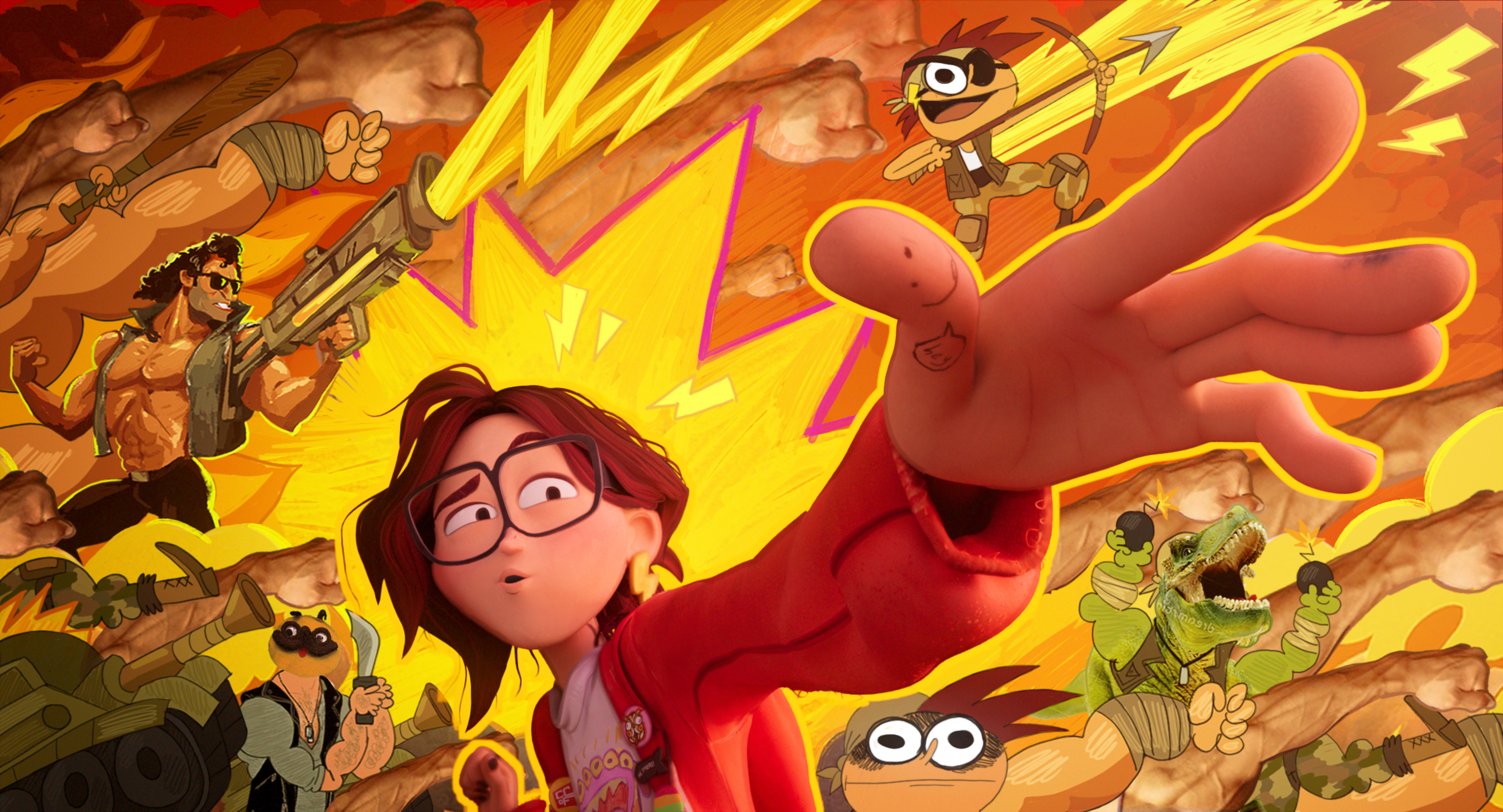 But Lord and Miller proved most valuable in helping fine-tune the storytelling. They warned the newbie director that it was going to get worse for a year before they saw improvement. “It was like going to animation graduation school,” Rianda said. “But they were able to defend our weirdest ideas. One thing that Phil was really great about was giving the emotional stuff time enough to play, and Chris came up with the bit about the [Number 3 Robertson Head Screwdriver]. That fixed a logic problem and became a character trait.”

“The main challenge of the movie,” added Lord, “was, even though they have a lot of conflicts, we’re stuck in a car with them for two hours, so we want to make sure that what we’re watching on the screen is these people solving the puzzle of their family as opposed to watching the family fight the whole time.” 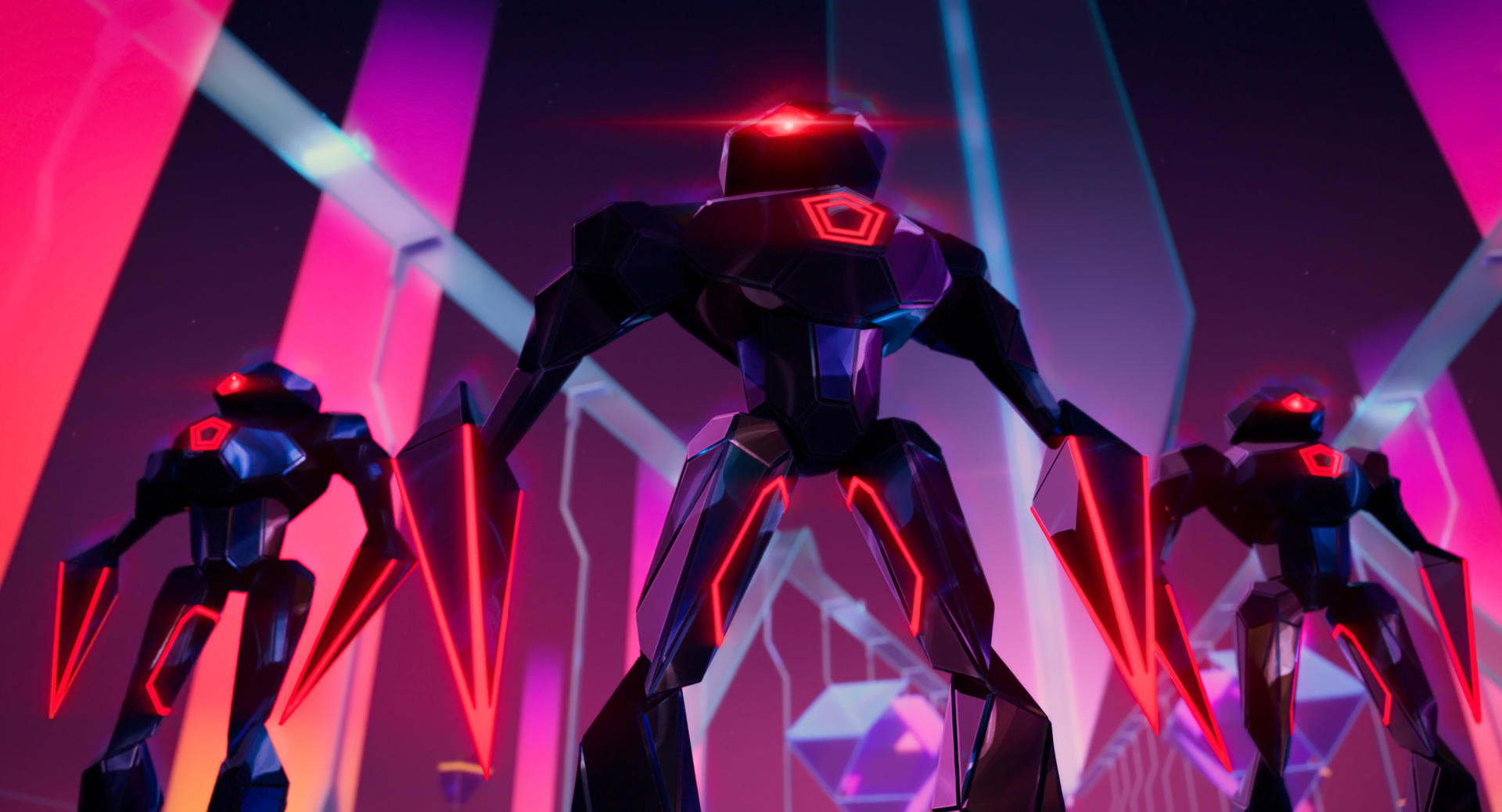 But after “The Mitchells” was finished and ready for release last fall, the pandemic forced Sony to shelve the film with theater closures. However, Netflix stepped in and acquired it from Sony, making them an offer they couldn’t refuse. “They didn’t want this movie sitting on the shelf for two years, and Netflix loved it and was committed to treating it like a tentpole,” Lord said.

Rianda was just relieved that the world would finally get to experience his first feature. But the pandemic made it timelier. “It matches the spirit of the movie completely because it is about a family in an unnatural disaster-type situation,” he said. “They have to come together, work together, and hold on to each other. And I do feel like that is what we’ve had to do during the pandemic.”

“The Mitchells vs. The Machines” starts streaming on Netflix on Friday, April 30.