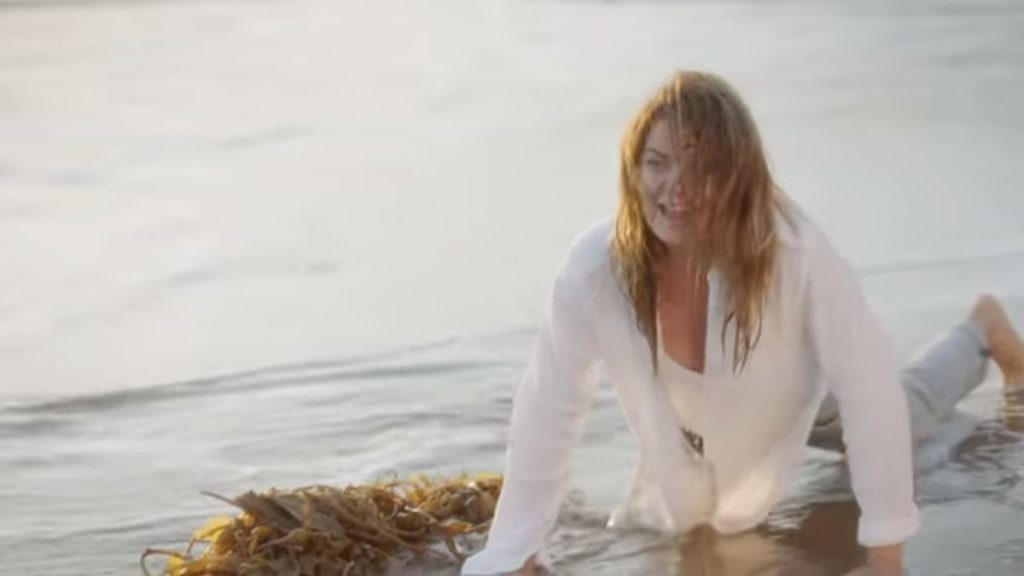 On November 19, Grey’s Anatomy fans were once again treated to Meredith’s (Ellen Pompeo) dream of reuniting with her dead husband.

But Derek (Patrick Dempsey) — who is still McDreamy — is too far away, and she can’t quite reach him.

In her real life, she’s still in a bed at the hospital. It’s been four days since she collapsed in the parking lot after contracting the coronavirus, and she’s getting antsy, to say the least.

Meanwhile, Maggie (Kelly McCreary) breaks down after failing to save her COVID-19 patients. They are dropping like proverbial flies, and she can’t seem to get a handle on how to prevent this from happening.

As for Tom Koracick (Greg Germann)?

He’s doing his version of scut by being in charge of the new interns, a job for which he has great disdain. He is also such a failure as a teacher that a number of them quit the program.

Also, at the hospital, Jo (Camilla Luddington) has been tasked with a difficult surgery: Saving a baby attached to her mother’s liver.

Then there’s Link (Chris Carmack), who has been called back to the hospital from paternity leave to help reconstruct a busy sex therapist’s hand.

He is thrilled to be among his colleagues on an interesting case and not back at Meredith’s house with all the kids running him ragged.

However, all of these activities seem somehow extraneous since Meredith is not doing well.

Maggie takes Teddy (Kim Raver) aside in the stairwell to make sure she is doing all she can to help her sister. Teddy says she’s good and continues to monitor this special patient with Deluca (Giacomo Giannotti) by her side.

Meredith deals with her POA on Grey’s Anatomy

The biggest dilemma in Mer’s case besides staying alive is to deal with her power of attorney (POA).

Her person for this aspect of life and so many others is Alex Karev (Justin Chambers), who has left his job at Grey Sloan to be with Izzie (Katherine Heigl) way across the country.

After much discussion, Richard Webber (James Pickens Jr.) is her choice. Mer has known him her entire life, and she knows he will do everything he can to save her.

But, he will pull the plug if she is brain dead.

Owen (Kevin McKidd) and Teddy have a moment when they cross paths, and it’s really awkward.

Koracick is beyond upset since he is no longer in touch with Teddy on a sexual level. After her phone accidentally recorded their lovemaking for all the hospital and her fiance Owen to hear, she seems to have forsaken him.

He finally admits he can’t mentor med students into their internships and asks Richard to step in, which he dutifully does.

An upbeat time on Grey’s Anatomy

Then things on Grey’s Anatomy get a bit more upbeat.

The liver baby lives, Link has safe distancing sex with Amelia (Caterina Scorsone), and Meredith returns to her COVID dream.

She still can’t reach Derek, and when she tries, she suffers a faceplant in the unreal sand.

Still, Derek says he will be there for her when the time is right. After that, the credits roll on another Grey’s Anatomy episode, leaving plenty of questions to be answered.

Will Meredith survive after contracting the cunning coronavirus? Will Alex return as her next COVID dream person? Or maybe Christina Yang (Sandra Oh) will turn up on the beach?

Everyone be warned: Another character from the past will come back to Grey’s Anatomy. Really.