Home » TV and Movies » GMB row turns into slanging match over Kerry Katonas Only Fans Get your facts right!

GMB row turns into slanging match over Kerry Katonas Only Fans Get your facts right!

Richard Madeley tells GMB guest 'you didn't have to come on'

Kerry Katona and The Real Housewives of Jersey star Tessa Hartmann joined Richard Madeley and Susanna Reid on Good Morning Britain today to discuss whether padded bikinis are sexualising girls as young as nine. However, Kerry exploded when Tessa questioned whether the former pop star should be outraged by the swimmer when she’s a member of Only Fans.

Tessa began: “There are a lot of things that sexualise children like these social media sites like Only Fans, when we’re talking about covering up the modesty of a nine-year-old who’s a bit self-conscious jumping into the pool, getting wet with, dare I say, her nipples showing.

“Actually, I think this is a really good thing for a body-conscious young teenage girl and the whole point of this is choice.

“It’s like anything in the marketplace, if you don’t want to buy it then don’t buy it. It’s like watching a TV programme, you have a choice.”

Kerry hit back: “First of all, Only Fans is over 18, no one is putting that to a nine-year-old child. 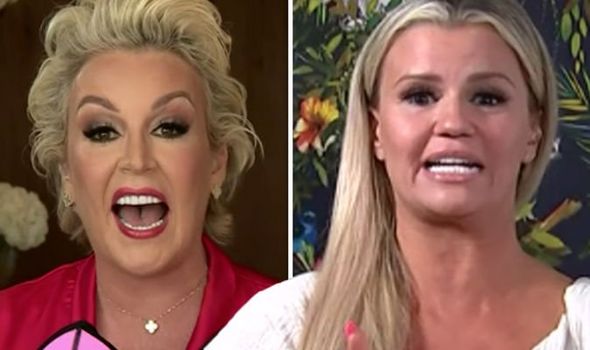 “And second of all, when I go on holiday to a resort with my children and there’s a bunch of strangers there I am not going to put my nine-year-old child in a padded bikini bra that is sexualising them not knowing who is stood there watching.

“For me, that is almost like dangling a carrot in front of paedophiles, that is how I feel.”

“But it’s okay for your teenage daughters to take the photos of your naked pictures to put on your social media site but you wouldn’t let them put on a bikini that covers their modesty?” Tessa asked.

“Well actually I just did a quick google and found all the pictures out there and these are the things that are influencing our children,” Tessa quipped.

“Hang on just a minute, that is an over 18 [website] sweetheart, why would a nine-year-old child be googling topless pictures in the first place?” Kerry hit back.

“Darling, we live in a digital age, everything is out there,” The Real Housewives of Jersey star argued.

“What I do for an over 18 site is completely different than a nine-year-old child’s padded breasts and making her feel [self-conscious],” the former pop star said.

“Obviously that’s a bit of a sore point for you but it’s about being a role model, isn’t it?” Tessa added.

Trying to interrupt, Richard said: “Okay, time, it’s time guys. Hang on a second Kerry, we just want to get a bit of order back into the discussion.

“Going back to Tessa, you said earlier there’s already a lot of unnecessary and unwelcome sexualisation of children, so why add to it?”

“Because Richard I don’t believe this bikini with a two–millimetre foam is sexualising children,” Tessa explained.

“If I turn on the radio and listen to songs with [certain] lyrics if I open social media and I see all the programmes and information and imagery that’s on there, that’s sexualising. Children can access everything on their tables, Netflix and all these things.

“There’s an abundance of things that sexualise children but a two-millimetre foam that’s a bit take on a very well known Australian brand at a reasonable price, I think is protecting the modesty of a nine to a 15–year–old.”

Richard argued: “Well I think the way Susanna held that bikini up to camera on a profile shot completely disproves your point.

“It is implying that the nine-year-old has developed breasts and that’s weird, I’m sorry it’s just weird.”

Good Morning Britain airs on weekdays on ITV at 6am.