Seven years ago, Lisa Hanawalt published a comic on Hazlitt Magazine’s website depicting an anthropomorphic, topless toucan belly-up on the floor of her apartment trimming her toenails, clippings flying into the air. “This is Tuca. She’s a toucan. She lives in the city,” the first panel reads. It was the germ of an idea that would become Tuca & Bertie, Hanawalt’s joyously surreal yet painfully real cartoon about female friendship, getting by in the big city, overcoming trauma, and, yes, bird people.

“I was a woman living in New York in my thirties when I first came up with Tuca,” Hanawalt recalls, speaking via Zoom from Los Angeles. “I had just watched a documentary about toucans stealing other birds’ eggs and gobbling them up, and I thought: I’m at Tuca! Like, I’m greedy and selfish and impulsive…on the inside.”

'Here Today': Tiffany Haddish and Billy Crystal Are a Rude Duo, Not an Odd Couple

The 30 Sexiest Music Videos of All Time

Hanawalt, who came up in comics, made waves in animation as the production designer and singular aesthetic eye behind Raphael Bob-Waksberg’s beloved Netflix series BoJack Horseman. She got the chance to do her own series with Tuca & Bertie, which premiered on the streamer in 2019. The show was an immediate cult hit, resonating with fans of BoJack and Broad City alike. Nevertheless, Netflix canceled the series after only one season. But we live an age when sufficiently great TV always has a chance at resurrection, and Tuca & Bertie found a new home on Adult Swim; the second season premiered June 13th.

“I mean, it was amazing. I didn’t quite trust it,” Hanawalt says of Adult Swim’s surprise offer, which came fast on the heels of Netflix’s cancelation. “As soon as we were able to start writing, I was like, OK, I’m not gonna believe this until I see it airing, basically.’ I didn’t want to get excited and then have the rug yanked out from under me. But I just had so many more stories I wanted to tell with these characters, so I was glad to get the opportunity.”

For those who haven’t yet experienced Tuca & Bertie’s glorious first season, the show centers on two best friends — the extroverted, freewheeling Tuca, voiced by Tiffany Haddish, and Bertie, a song thrush with big dreams and a lot of anxiety, voiced by Ali Wong. Minari Oscar nominee Steven Yeun plays Bertie’s doting boyfriend, Speckle. (The couple came from another of Hanawalt’s comics, Planting, for the now-shuttered Lucky Peach magazine.) They live in a New York–esque city occupied by birds and sentient plants, every corner of the screen alive with hallucinatory visions of a teeming urban jungle.

The move from the ideas she’d played with in the Tuca the Toucan and Planting comics to animated series came in 2015 when Tornante, the production company behind BoJack, asked Hanawalt if she had a show idea she was interested in developing. “And me and Raphael,” she recalls, “we’d just kind of, like, walk around the block of the animation studio, talking about what this show could be. And slowly it turned into this show about these two female friends.”

Hanawalt also knew that she wanted to take the visual style she’d developed for BoJack to a much stranger, trippier, place. “Raphael wanted [BoJack] to be a very grounded world — like, it has animal people, but other than that, it’s not that surreal,” she says. “After years of working on that, I wanted to go the opposite direction and have a show where inanimate objects can come to life and talk. And Raphael was really excited about that idea, too.”

She worked with her friend, art director Alison Dubois, on the concept for the background design and some of the other characters. “She has a looser drawing style and figured out a way to make it look more artful,” Hanawalt says. “Like, a lot of the lines aren’t straight lines. There’s a lot of textures everywhere. It doesn’t look the way the real world looks, but it feels real.” (She cites a Season Two episode in which Tuca takes a series of insomnia-fueled walks through the city, the show’s visuals half-slipping into the realm of dreams.) 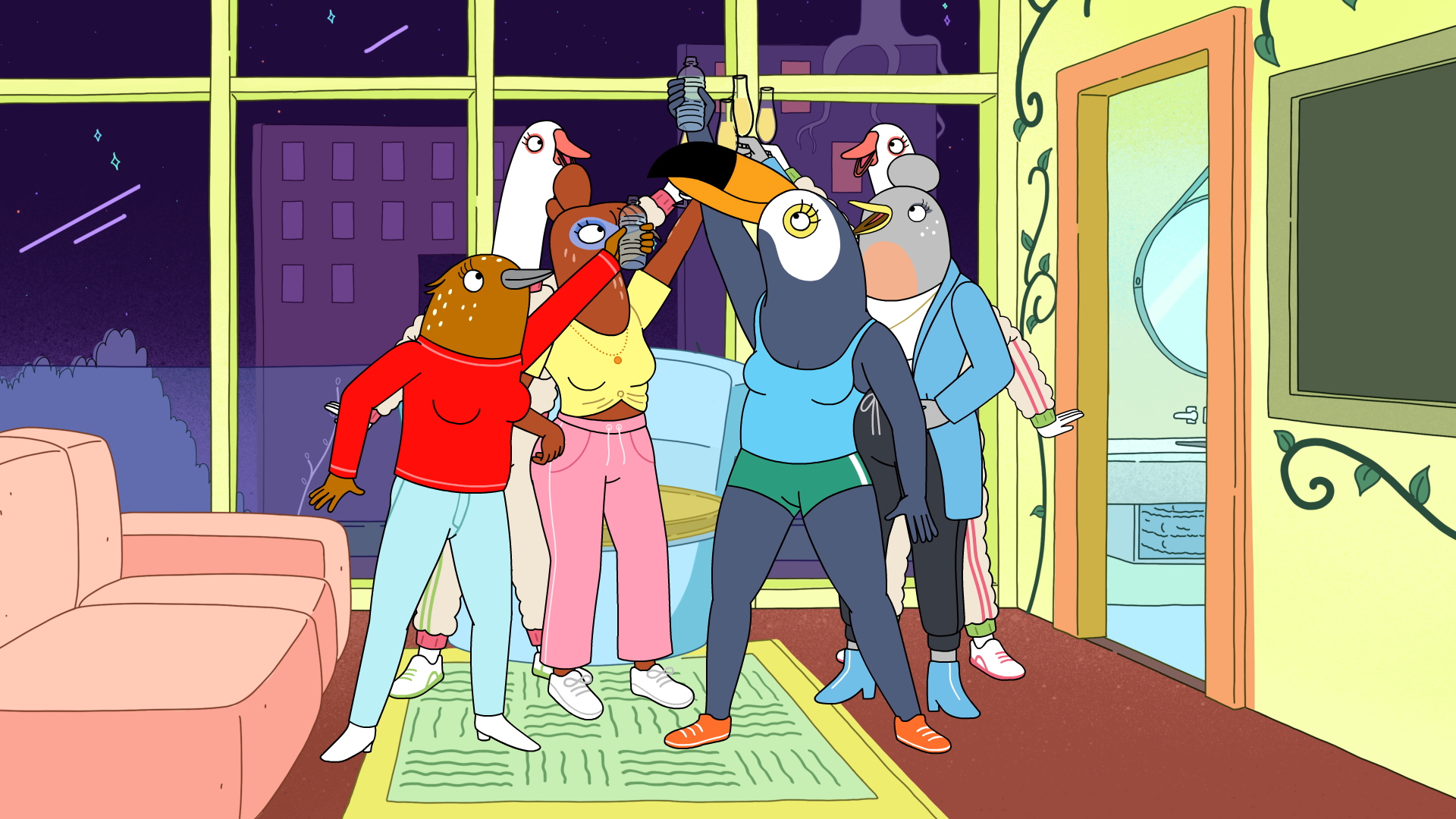 Despite the series’ experimental visuals, Tuca and Bertie’s problems are grounded in struggles that will be recognizable to city-dwelling millennial women everywhere. Bertie works a thankless job where she feels ignored by the preening men around her and dreams of opening her own bakery. She’s also struggling to maintain an even keel in her relationship with Speckle, as well as facing down the trauma of past sexual harassment and assault. Tuca, meanwhile, lives a life that’s joyful but aimless, and must come to terms with how her friendship with Bertie has changed as the pair’s life paths have begun to go in different directions; she’s also coping with a complicated relationship with her family as well as her newfound sobriety.

“I wanted [to talk about] all the things that start to happen when you’re in your thirties and you’re getting older — they can start to threaten a friendship like that,” Hanawalt explains. “It’s like, one person is suddenly getting married and moving into a house and having kids, maybe, and someone else is still single and they’re living like they did when they were 25. I think those differences can start to become more pronounced when you’re in your thirties. And there’s more pressure to figure out what you’re doing.”

Tuca & Bertie pulls off the seemingly impossible trick of balancing raunchy, laugh-out-loud comedy with the show’s darker themes, blending the two organically in a way that makes the lighter issues feel heavier and the heavier issues feel lighter. “I usually start with the serious stuff that I want to say,” Hanawalt says. “Like, let’s do an episode about sexual abuse, and how does that keep popping up over and over again even though you felt like you’ve already processed it. And that’s a really serious thing. But then we can start to figure out a surreal way to show that, and we can put in all these jokes and visual gags.”

The cast is rounded out by a who’s who of beloved actors and comics: Richard E. Grant, Nicole Byer, Reggie Watts, John Early, Laverne Cox, and Isabella Rossellini, to name just a few.

“I keep lists of people that I want to work with,” Hanawalt says. She knew Haddish had to be her Tuca after seeing her comedically unforgettable turn in Girls Trip. Fellow comedian Wong originally auditioned for Tuca as well, but ultimately revealed herself as the perfect Bertie.

The second season sees our two heroines, their friendship recently mended, continuing to explore their relationships to themselves and the world around them. Hanawalt says she was interested in telling stories about how Tuca and Bertie are growing and changing, both together and apart.