A high schooler gains the power to steer her father’s movements on the football field in what feels like a long video game ad. 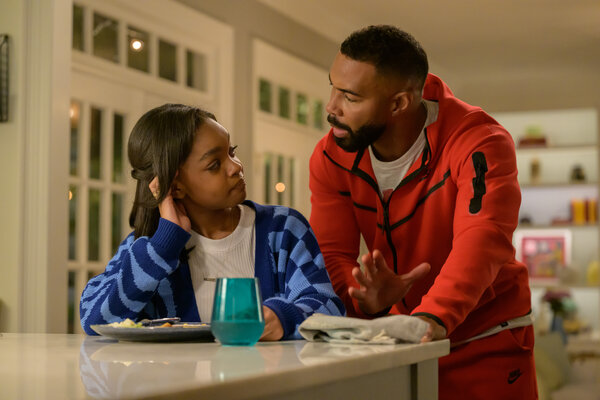 In the movie lineage of kid undergoes life-changing, high-jinks-inducing spell — typically a bodily transformation governed by some nameless supernatural force (e.g. “Big,” “Freaky Friday”) — “Fantasy Football” presents a somewhat whimsical new twist. A lightning strike gives Callie (Marsai Martin), a brilliant high schooler who has had to endure an itinerant childhood because of her father’s (Omari Hardwick) unstable pro football career, the power to control his movements via a video game.

Callie uses this newfound ability to turn her father into an improbable late-age superstar, but her involvement, and her dad’s obsession with his own success, begins to suffocate her life. Early on, Martin’s rather grown-up demeanor means the trope of the bewitched kid lacks a certain lighthearted, childlike wonder. But by the second half, Martin’s quality finds more purpose, informing the central conflict between her and her career-focused father.

Although the film — which includes a just-fine big-screen role for the Hall of Fame tight end Tony Gonzalez as the football coach — can be lightly charming, it is mostly perfunctory. In some ways it’s a long ad for Madden, the popular video game. Hardwick and Martin have decent chemistry, but the film lacks a true charisma that would make it a children’s classic worth revisiting.