‘Everything Everywhere’ Takes Top Prize at the Gotham Awards 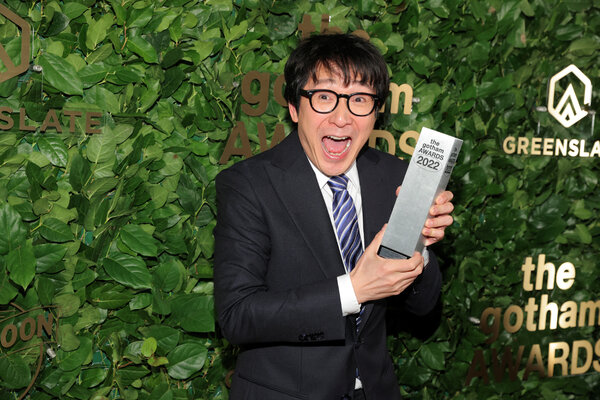 The hit sci-fi comedy “Everything Everywhere All at Once” earned top honors at the Gotham Awards on Monday night, taking the ceremony’s best-feature prize as well as a supporting-performance trophy for the actor Ke Huy Quan.

“This time last year, all I was hoping for was just a job,” said an emotional Quan, who starred in “The Goonies” and “Indiana Jones and the Temple of Doom” as a child actor but then found work hard to come by. “Just when I think it can’t get any better, it does.”

The Gothams are the first big show of awards season, handing out prizes before the Screen Actors Guild and the Oscars have even announced their nominees. Though the winners are chosen by a jury made up of only a handful of film insiders, the Gothams can still provide momentum and a clutch of positive headlines for the contenders who triumph there.

One such victory came for lead performance. Since the Gothams have adopted gender-neutral acting categories, three significant contenders for the best-actress Oscar — Cate Blanchett (“Tár”), Michelle Yeoh (“Everything Everywhere All at Once”) and Danielle Deadwyler (“Till”) — faced off against “The Whale” star Brendan Fraser, the presumptive front-runner for the best-actor Oscar. And in that star-packed battle royale, Deadwyler, a rising actress, prevailed for her performance as Mamie Till-Mobley, who becomes an activist following the racially motivated murder of her son, Emmett Till, in 1955.

That will help Deadwyler earn more eyes for her movie, though she was absent from the ceremony, as was Steven Spielberg. He had been booked to present an honorary award to his “Fabelmans” star Michelle Williams but was forced to cancel after contracting Covid. Williams, another significant best-actress contender, took the stage to deliver a moving tribute to Mary Beth Peil, who played her grandmother on “Dawson’s Creek,” the teen drama in which Williams got her start.

Inside the World of ‘Everything Everywhere All at Once’

In this mind-expanding, idiosyncratic take on the superhero film, a laundromat owner is the focus of a grand, multiversal showdown.

“Whenever something good happens in my life, I can draw a straight line” back to Peil, said Williams, who credited the older actress with patiently teaching her lessons about the craft when Williams was still finding her way. “I wasn’t an artist or a mother, I wasn’t even a high school graduate,” Williams said. “But I was Mary Beth’s girl, and that made me a somebody.”

As an Oscar predictor, the Gotham Awards can be spotty: “Nomadland” kicked off its juggernaut run by winning the Gothams’ best-feature prize for 2020, though the Gothams victor for 2021, “The Lost Daughter,” didn’t manage to crack the Oscars’ best-picture lineup. And since the Gothams restrict eligibility to films made in the United States for less than $35 million, the ceremony spotlights a narrower slice of films than the Oscars do.

Still, it’s a great barometer for industry enthusiasm: At last year’s Gothams, the winning “CODA” star Troy Kotsur delivered such a well-received acceptance speech that future victories, including the Oscar, seemed almost assured. This year, enthusiasm was high for “Everything Everywhere,” directed by Daniel Scheinert and Daniel Kwan, which earned big cheers for its best-feature win but even bigger cheers for the endearing Quan, who plays Michelle Yeoh’s husband in the film and could be poised for a Kotsur-like sweep of the televised awards shows.

“Oftentimes, it is in independent films where actors who otherwise wouldn’t get a chance find their opportunities,” said Quan, who had spent decades behind the camera until “Everything Everywhere” revived his career. “I was that actor.”

Earlier in the show, held at Cipriani Wall Street, honorary awards were given out to “The Woman King” director Gina Prince-Bythewood and to the actor Adam Sandler, who brought the house down with a self-deprecating speech that he claimed had been written by his teenage daughters.

But the most thoughtful comment came from the writer-director Todd Field, who picked up a best-screenplay prize for “Tár” and used his acceptance speech to take aim at the entire notion of awards shows.

“‘Best.’ We all know that word is a cartoonish absolute with no place in any conversation about creative endeavors,” Field said. “But we campaign for it, we show up for it, we pray for it, if only so the thing we made will be seen and heard and not forgotten in this noisy world.”