Emmerdale: Nicola gets knocked to the ground in violent attack

Nicola (played by Nicola Wheeler) has been seen starting to develop serious anxiety on Emmerdale as a result of being attacked by a group of teenage girls as she doesn’t want to leave the house. The beloved character has also started to push away those closest to her, including her husband Jimmy King (Nick Miles) and her sister, Bernice Blackstock (Samantha Giles). As her mind is plagued with thoughts of the girls returning to finish the job, the villager becomes spooked in upcoming scenes on the ITV soap and ends up attacking someone herself, which could result in the murder of another character.

The drama continues as Nicola ends up crashing her car into David Metcalfe’s (Matthew Wolfenden) van and he hounds her for an insurance claim.

This is the first time the mother of three will have been out of the house and so this reinforces the fact she should be in the house.

Nicola also doesn’t want to be alone, however, and ends up keeping her son Carl Holliday (Charlie Munro Joyce) off school.

Although he seems to have gotten over his 24-hour stomach bug, Nicola decides he should stay at home for longer and as a result, she ends up suffering a panic attack.

Thankfully, she is brought around by Carl who is seriously worried about his mother, resulting in yet more concern for them both. 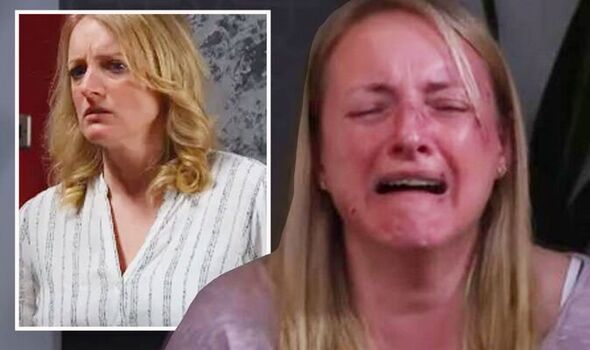 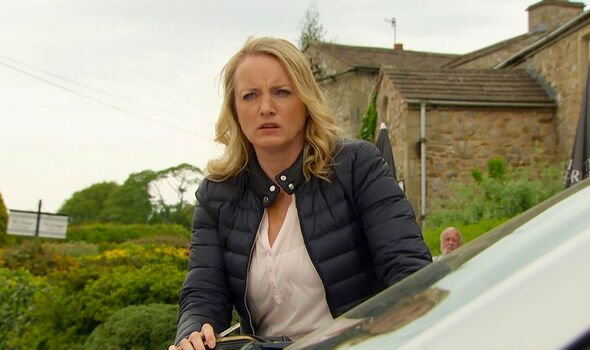 As she tries not to worry him so much, Nicola starts looking for some chocolate she can give Carl but he manages to get hold of her phone.

Once outside, he knows he is able to get some help as his mother remains in the house, unable to conquer her fear of stepping outside her front door.

With the thoughts of her own attack entering her head, the beloved character has a full-blown panic attack and believes she can hear girls laughing outside the house.

Thinking the attackers have returned as they know her address from the driving licence they stole, she prepares to defend herself.

Opening the door and armed, Nicola hits someone over the head but viewers won’t know who it is until the episode airs. 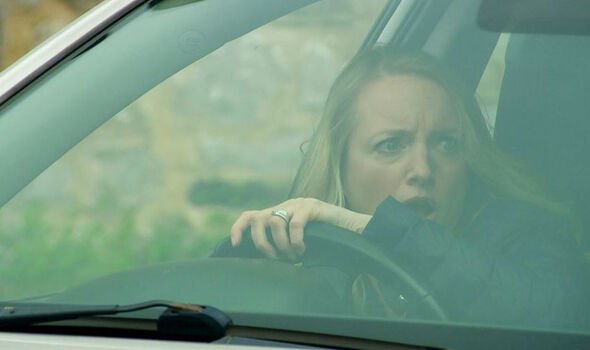 Nicola is having a complete crisis attack

Nicola will be left in a state of shock as she can’t quite believe what she has done as she has now become the attacker.

It is likely she will want to see the face of the person she hit over the head and as she turns their body over, she could see it is someone very close to her.

These are all people who would want to check up on Nicola and would have been in such close proximity to the house.

Calling for an ambulance, Nicola would know the person she has attacked needs urgent medical care and the emergency services could rush them to the hospital. 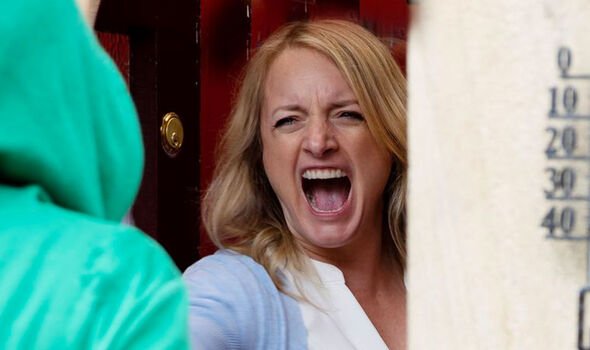 Unfortunately, the beloved villager might not make it and a murder investigation would launch into how they died as the police know they were hit over the head.

Unable to take the guilt on her shoulders anymore, Nicola could confess to murdering the unknown character she hit.

She would try to justify her actions but in the eyes of the law, she still ended up killing someone and she would need to be punished.

This could lead to her exit from the show as the character is sentenced to spending in prison for murdering someone.

Despite claiming it was an accident, someone would have still lost their life so Nicola could be leaving the programme for a good length of time.

How well do you know your British soaps?

How many times has Ian Beale been married in EastEnders?

What is the name of Bianca Jackson and Ricky Butcher’s son on EastEnders?

On EastEnders in 2002, who accidentally ran Jamie Mitchell over in his car which caused his death?

How many times has Corrie’s Steve McDonald been married?

What happened to Emily Bishop in Coronation Street?

Who murdered Maxine Peacock in Coronation Street in 2003?

Which incident in 1993 killed off four characters in Emmerdale?

When did the show stop being known as Emmerdale Farm?

On what date did Hollyoaks air its first episode?

What was the name of the much-loved Coronation Street pet dog who was put down in April 2020 after 14 years?

1996 saw the arrival of one of Hollyoaks all time bad boys and rival of Kurt Benson, but who was he?

Who is the longest serving character on Coronation Street?

Who shot Phil in EastEnders?

How many fires have there been at Corrie’s Rovers Return?

Get out of my pub, you’re no soaps fan

The actress who plays Nicola, Nicola, has spoken in an interview with Express.co.uk and other media about her character becoming an attacker.

Nicola said: “Nicola is basically having a complete crisis attack.

“It starts as a panic attack because again, she starts to have flashbacks to what happened with the girls and she obviously doesn’t realise it’s not the girl she thinks it is.

“And she just goes into full attack mode. At this point, Carl knows something is wrong and ran out to go and call Laurel for help.

“Because he thinks there is something wrong with mummy and so Nicola has to run into the garden before getting back in the house.”

“Of course, that sets her off and she starts to hyperventilate and she just spirals, it’s a day of chaos,” the actress continued.

“She just spirals and then it gets too much,” Nicola added.

However, would Nicola really be in such a state of mind she can’t see who is in front of her and mistake them for one of her attackers?

If she is to spend time in prison, it would change her life forever as she wouldn’t be able to see her children grow up.

Will the attack have had bigger ramifications than even Nicola would have ever expected?

Emmerdale airs weekdays at 7:30pm on ITV, with an hour-long episode airing on Thursdays.