Emmerdale viewers have seen Rhona Goskirk (played by Zoe Henry) and Moira Barton (Natalie J Robb) bond over their recent struggles this week and tonight saw the pair decide to go into business together. However, as Rhona makes the move, could she cause some tension in the Dales if she steals business from her ex-partner Paddy Kirk (Dominic Brunt) who is in charge of the local vets?

Rhona was left heartbroken earlier this year when her beloved partner Graham Foster (Andrew Scarborough) was brutally murdered on the ITV soap.

She later discovered it was her evil ex-husband Pierce Harris (Jonathan Wrather) who had struck the killer blow and he pleaded guilty to murder.

Late last week, she was relieved to find out Pierce’s fate as she was informed he had been sentenced to life in prison.

Rhona is finally able to start moving on from her horrific ordeal and tonight saw her make Moira a proposition she couldn’t turn down – what will it mean for Paddy? 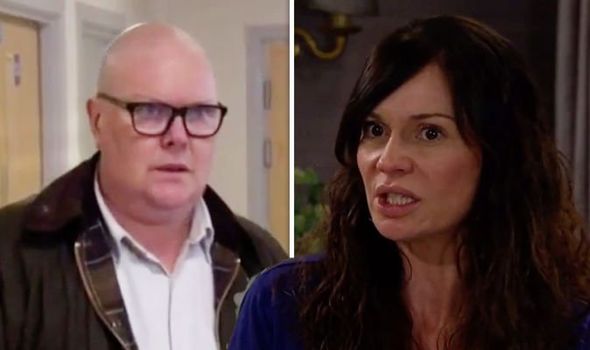 In Monday’s instalment, Rhona decided to go and check on her friend Moira after becoming worried about her spending time on her own.

Moira explained how she was unable to afford to get her sheep checked before selling them when Rhona stepped in.

She offered to do it for free and the pair had a much-needed heart-to-heart and vented their frustrations to each other.

This evening, Moira made the confession she would have to sell the farm to Kim Tate (Claire King) as she took desperate measures to fix her finances. 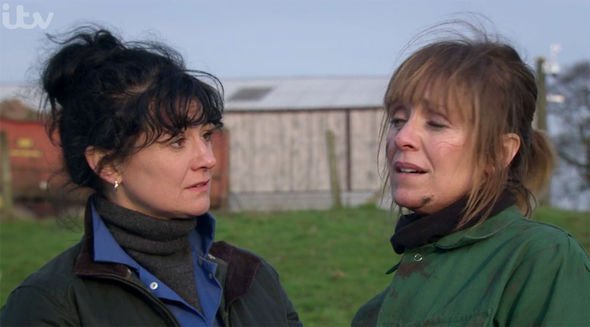 As she opened up to her son Matty (Ash Palmisciano) about her decision, Rhona stepped in and offered her a lifeline.

Rhona came over to the pair, asking: “Hey, I didn’t mean to listen in but… you’re selling to Kim?”

Moira reluctantly agreed as Rhona asked whether the decision was signed, with the farmer admitting: “Well, I haven’t said it’s a definite yes, I’m trying to keep her hanging, see if I can get a little more out of her. It’s not exactly a generous offer.”

Matty and Rhona urged Moira not to sell Butlers Farm to Kim as she replied: “What else can I do? Apart from go bankrupt or it gets repossessed?”

However, Rhona offered up an unlikely solution, telling her: “Sell to someone else, like me. Right, Graham has left me a lot of money. So we could go into business, we could be partners!”

As Moira queried Rhona’s role at the vets, the latter explained: “I’m only doing locum work and there’s not much of it.

“I need something new. This could be really good for both of us, what do you say?”

Moira was overjoyed by the suggestion, responding: “Are you serious? Rhona, I want to kiss you right now.”

The pair joined Paddy, Marlon (Mark Charnock) and Chas (Lucy Pargeter) where they confirmed the news.

Rhona explained the logistics of their new project, telling the trio: “I can do my vet work from there.”

However, one person was not impressed as Paddy reminded her: “But we’re the vets for Butlers.”

Rhona insisted the details had not yet been finalised but Paddy didn’t look convinced – could his business be at risk if Rhona decides to leave for good and take some of his clients?

Emmerdale continues on Friday at 7pm on ITV