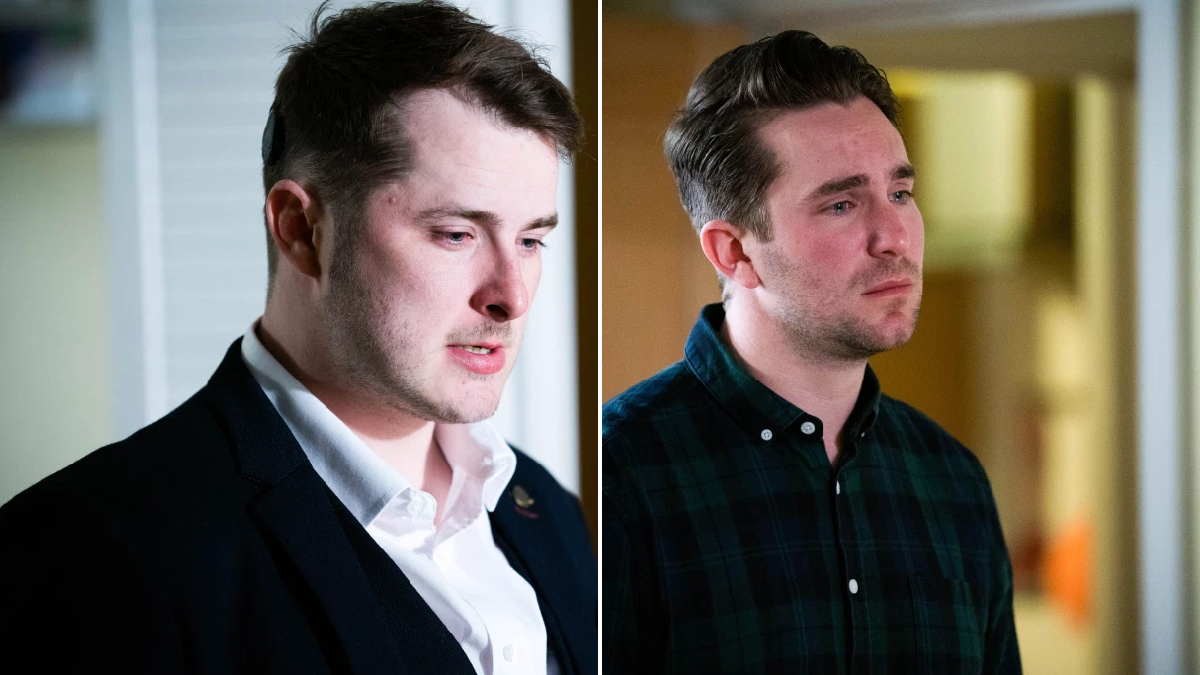 Ben Mitchell (Max Bowden) and Callum Highway’s (Tony Clay) EastEnders wedding is thrown into jeopardy in coming weeks as Callum decides it’s time to be completely honest with his husband to be about how far he was made to go to betray his dad Phil (Steve McFadden) to the police.

With Ben caught up in another messy situation following the death of Kush Kazemi (Davood Ghadami), the shock from Callum blindsides him – but Tony believes it’s right that everything is laid on the table.

The actor told Metro.co.uk: ‘For Callum it’s history repeating – marriage to Whitney from before, what did he learn from that? He can’t go into something with secrets and lies – he has to tell him, this is for real this time. This is who he is and who we wants to be with. He can’t tell Ben “no lies” and then have this massive one hanging over himself.

Max warned: ‘The stakes are very high. Callum comes out with this massive confession out of nowhere at a time when he really doesn’t need it. It allows them to come to loggerheads and it’s a very frustrating situation for them. The stakes are high and there’s a lot on the line.

‘He’s incredibly lost at this point. Everything he thought he knew has been thrown into the balance. They’re supposed to be getting married so he is so confused.’

That said, Tony believes that Callum has enough belief that they can make it and have a chance – and the character isn’t giving up.

He revealed: ‘I think that in his heart of hearts, he thinks they have been through so much together, they can get through anything. He genuinely believes love can overcome everything they’re going on He feels so strongly towards Ben, he knows it’s meant to be. That’s all he’s focused on – he doesn’t care about Phil, let’s just crack on, you and us against the world.’

Phil might not see it that way and, asked if he would be capable of killing Callum, Max replied: ‘It’s a risk he’s not willing to take. It’s not just about the physical action, it’s the mental action of allowing Callum into the wedding. If he goes through with it, he needs his dad on side. The stakes of the situation are so high, it’s very dangerous going forward.’

Another spanner thrown into the mix is the arrival of Callum’s grandmother Vi – a battleaxe presence ready to clash with everyone in her path.

Max smiled: ‘Ben brings her in which is a really nice moment. Gwen is one of the most fascinating people I have ever worked with. One second she is so posh then she’s as Cockney as they come. We’re very lucky to have her.’

Tony agreed, continuing: ‘If I am like Gwen Taylor at 84, I’m all right with that. She’s incredible. This job is difficult as it is without Covid restrictions but she is phenomenal. The audience will love her, I feel very lucky to work with her. Gorgeous human being.

‘Vi is from a bygone era, she makes quips like things aren’t the same since the gays took over. Ben and Callum are like “are you for real”. But we see how a relationship pans out with Callum, Stuart and Ben.

When Max added that she is so besotted with Stuart and that Callum is a side part, Tony quipped: ‘That’s what I have to deal with!’ but Max jokingly replied: ‘Could be worse – you good have Ian Beale as a brother!’

So we have a raging Phil, a problematic Vi and a massive revelation – but there is another problem in the form of Whitney Dean (Shona McGarty).

Tony sighed: ‘It does break his heart a little bit but there it a total understanding of where she is at and what they have been through in the past. Ultimately, Whitney thinks he is making a mistake and you will see conversations between them around that.

‘She’s got some lovely stuff coming up that’s really interesting – her reaction to it all will be interesting. Callum feels like Ben has changed and everything is different – he knows deep down things they won’t do. It puts him in a bit of a position between Whitney and Ben.’

The odds are stacked against them but both actors would love to see them get married at the end of it all.

As Tony was accidentally disconnected from our interview, Max shared: ‘Obviously, it would change the dynamic. When you step into marriage, it has to change regardless. For these two characters, the stakes are much higher if they’re officially married. With so much baggage, it’s a massive commitment.’

At this point Tony replied and Max joked: ‘Obviously I hate working with Tony, so if they don’t get married…oh you’re back! I was just saying how wonderful you are. We love working together. We would love them to be married!’

Laughing, Tony added: ‘Absolutely. They work really well together, I love working with Max and it would bring them together – going forward, they’d be more of a force.

‘It’s not Callum chasing after Ben and wondering what he’s done and that’s enjoyable for us that they deal with each other’s problems now. It would be a case of “we’re all in now – you’ve done something, I want us to face this head on together.” That’s a really important dynamic if they move forwards.’

A big if – they have to make it up the aisle event free first and this IS EastEnders after all!