DWTS host Tyra Banks' wildest show outfits on display after she defended her outfit choice from Monday's episode that fans compared to a Jurassic Park dinosaur.

The supermodel has donned some outrageous looks during her time as host of the celebrity dance competition. 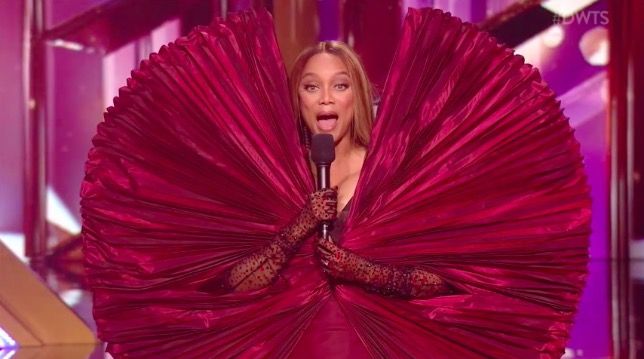 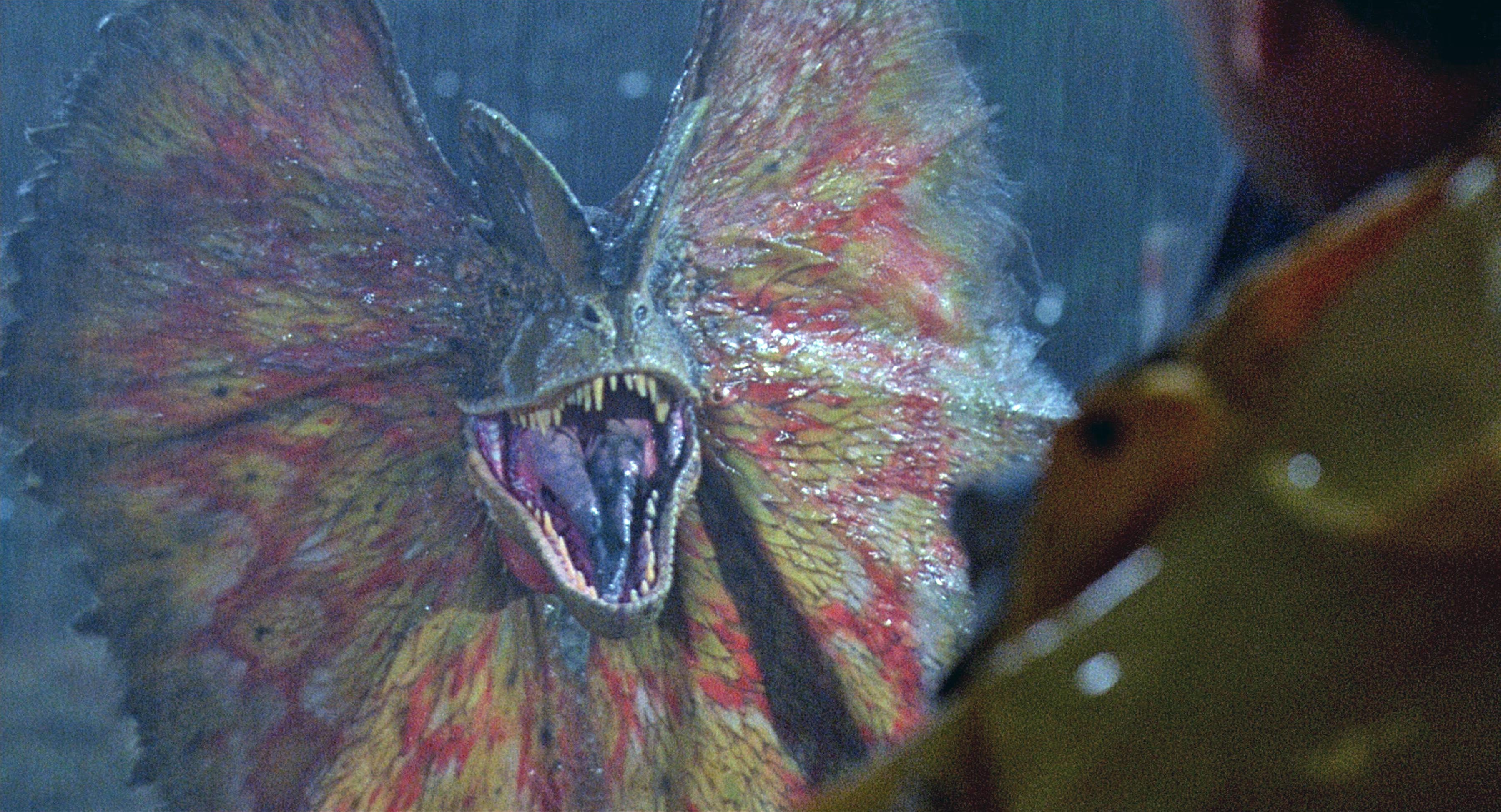 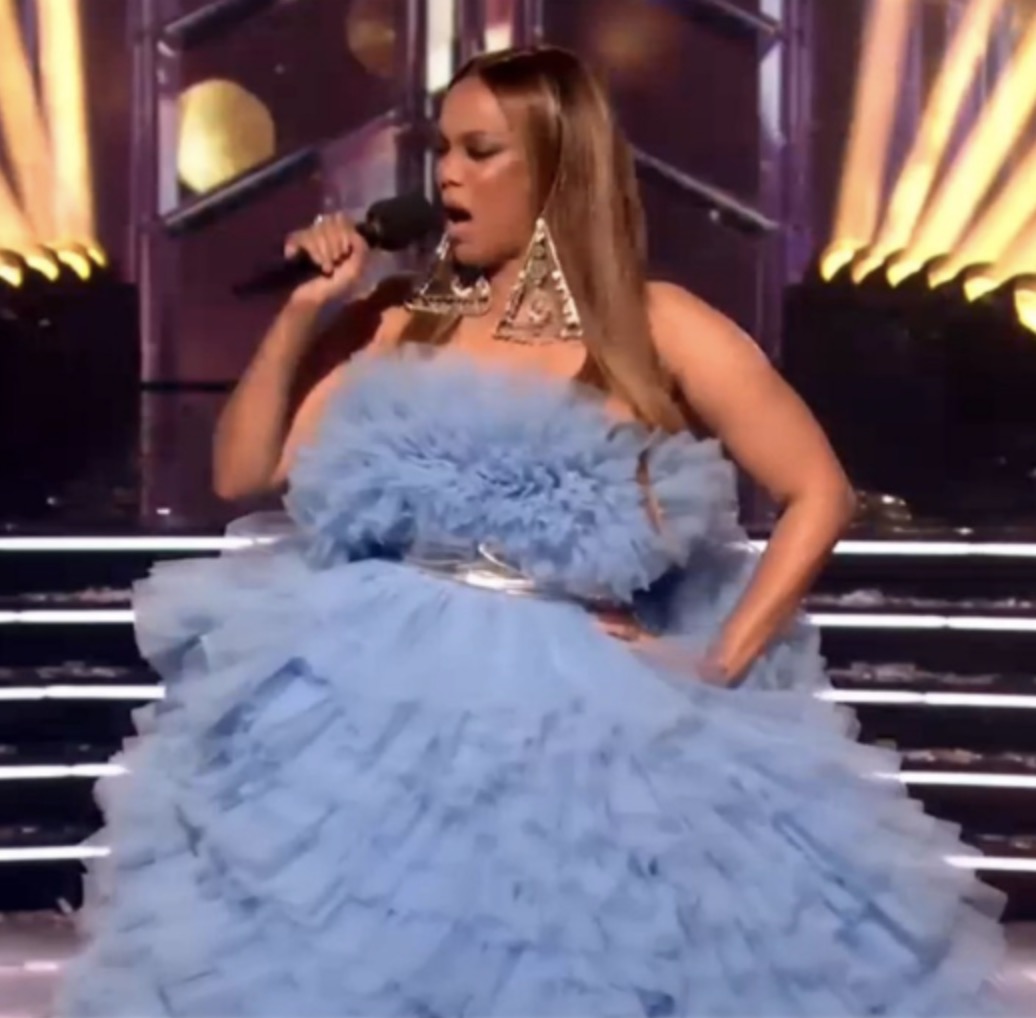 This week's outfit selection may be at the top of the list for arguably her most extravagant look yet.

Following an wardrobe change halfway through the show, Tyra, 47, took the stage wearing a short burgundy dress with oversized wing-like sleeves fanning out the sides.

Fans couldn't help but post their opinions on social media, with some equating the bizarre attire to the dilophosaurus that was featured in the 1993 film, Jurassic Park.

Others thought the sleeves resembled handheld paper fans while adding it looked “tacky.”

One person asked: “Wow why does Tyra's stylist hate her? What in the paper fans is she wearing?”

While a second questioned: “I’m sorry, but my first thought when I saw Tyra in this dress was, ‘why is she dressed like a period blood clot?’ 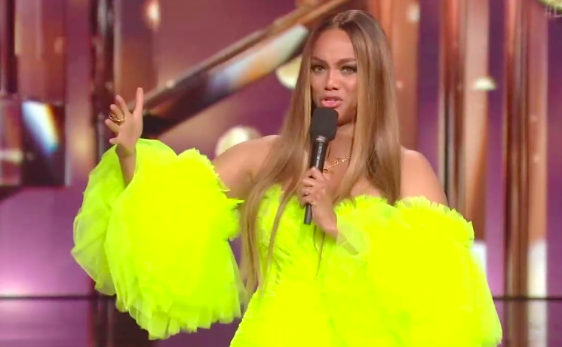 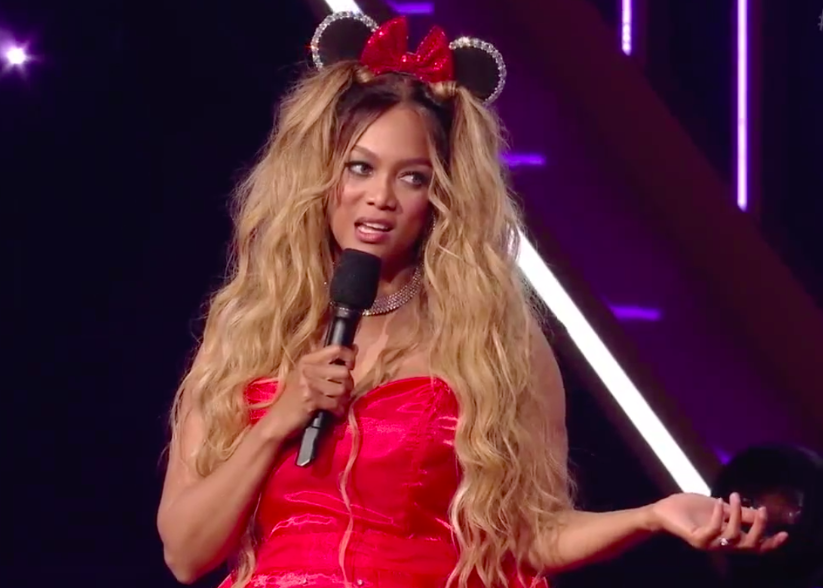 “Oh Lord! That fan dress that Tyra has on is not only ugly, but tacky as well. The best part of it was the color,” a third insisted.

A fourth fired off: “I hope someone tells Tyra to stop wearing this foolishness…she’s taking the attention from the dancers…we should not be tweeting about her bad wardrobe choices.”

Tyra stood up for the unpopular dress in an interview with E!'s Daily Pop saying: "There's a base of that dress. It looks like a normal, beautiful dress from the '90s.

"Then I go on the stage in front of the audience and everybody, and I put on the wing thing. And everybody was like, 'Oh!' because they thought the first thing was the normal dress," she continued.

The America's Next Top Model creator added: "I call it Victoria's Secret 'wangs.' It's not wings. It's got an 'A.'" That's how we did it."

This isn't the first time viewers have questioned the Life Size actresses attire while hosting the program.

Last year, fans slammed the star's copy-cat version of Jennifer Lopez's iconic Versace dress that the model wore as a tribute to the 51-year-old singer.

Tyra sported the infamous gown for the show's Icon Night, which had the contestants dress up as legends.

One DWTS fan commented on the look writing: "I would love for Tyra to never disrespect JLO like that again."

Another fan added: "Is tyra dressed as knock off jlo for icon night?"

The criticisms continued as another person wrote: "Not Tyra in this JLo Versace-lookin’ dress."

The TV host didn't let critics get her down as she stepped out in another daring number the following week, this time being compared to a "feather duster."

Tyra certainly stood out in her full-length dress, which featured a ruffled bodice and tiered skirt.

The former ANTM host was clearly a fan of her outfit, tweeting on the night: "Sneaking up on you with those sneakers under my couture baby blue dress."

Viewers weren't so impressed, however, likening the garment to everything from a loofah to a piece of lint.

One tweeted: "Exactly how much dryer lint did it TAKE to make Tyra Banks’ dress at the opening of the show?"

Earlier this year, the network confirmed that Tyra would be returning as host for season 30 of the show.

The supermodel first landed the role for season 29, as she replaced longtime hosts, Tom Bergeron and Erin Andrews.

However, the TV personality received heavy criticism from fans as they bashed her for "not preparing" for the role.

Viewers called her an "epic failure" as ratings reached a lower-than-usual level.

A source at the time told E! News that Tyra doesn't allow judgement from the public bother her.

"She tunes out the noise and doesn't listen to social media critiques."

Dancing with the Stars airs Mondays at 8:00 pm EST on ABC. 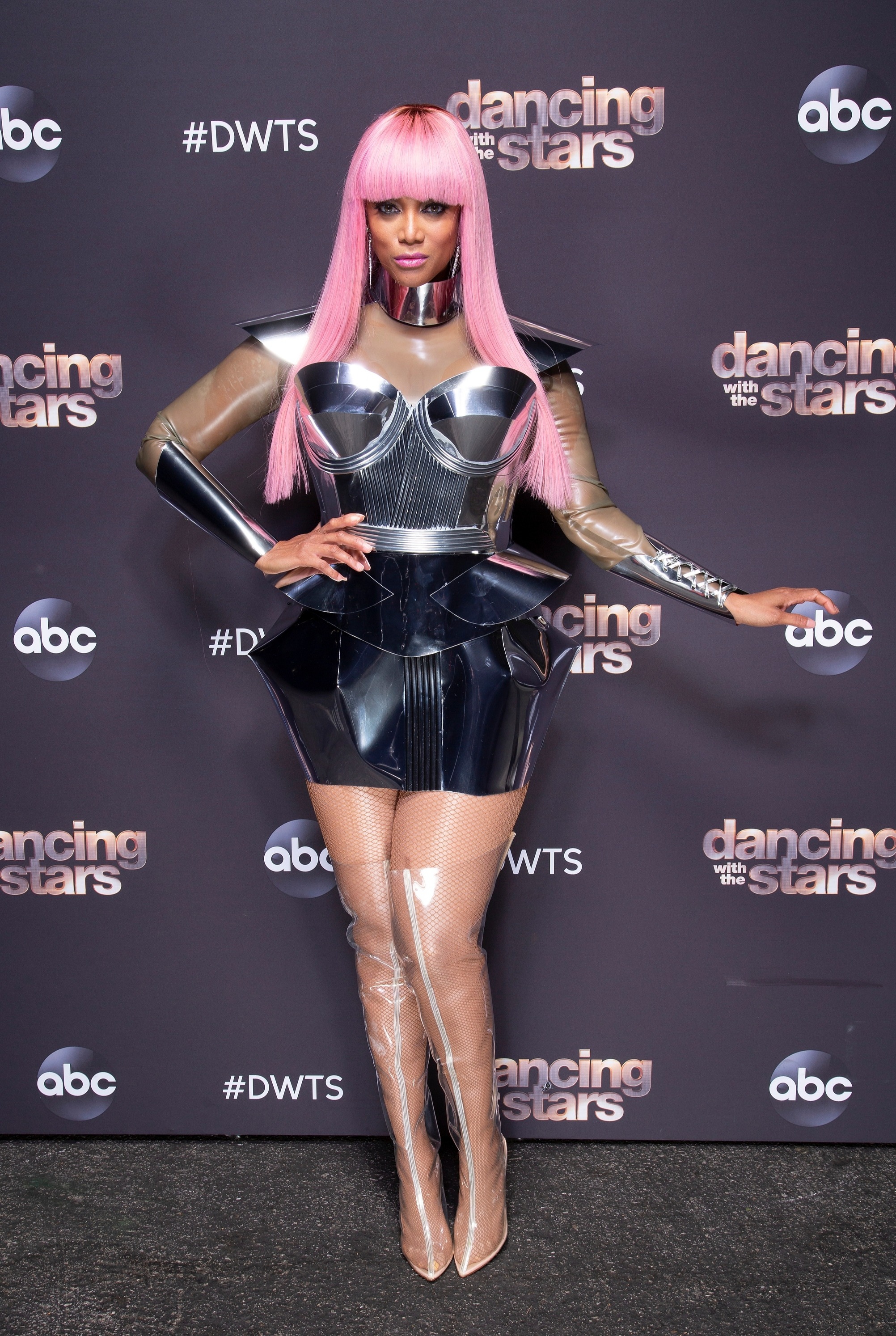 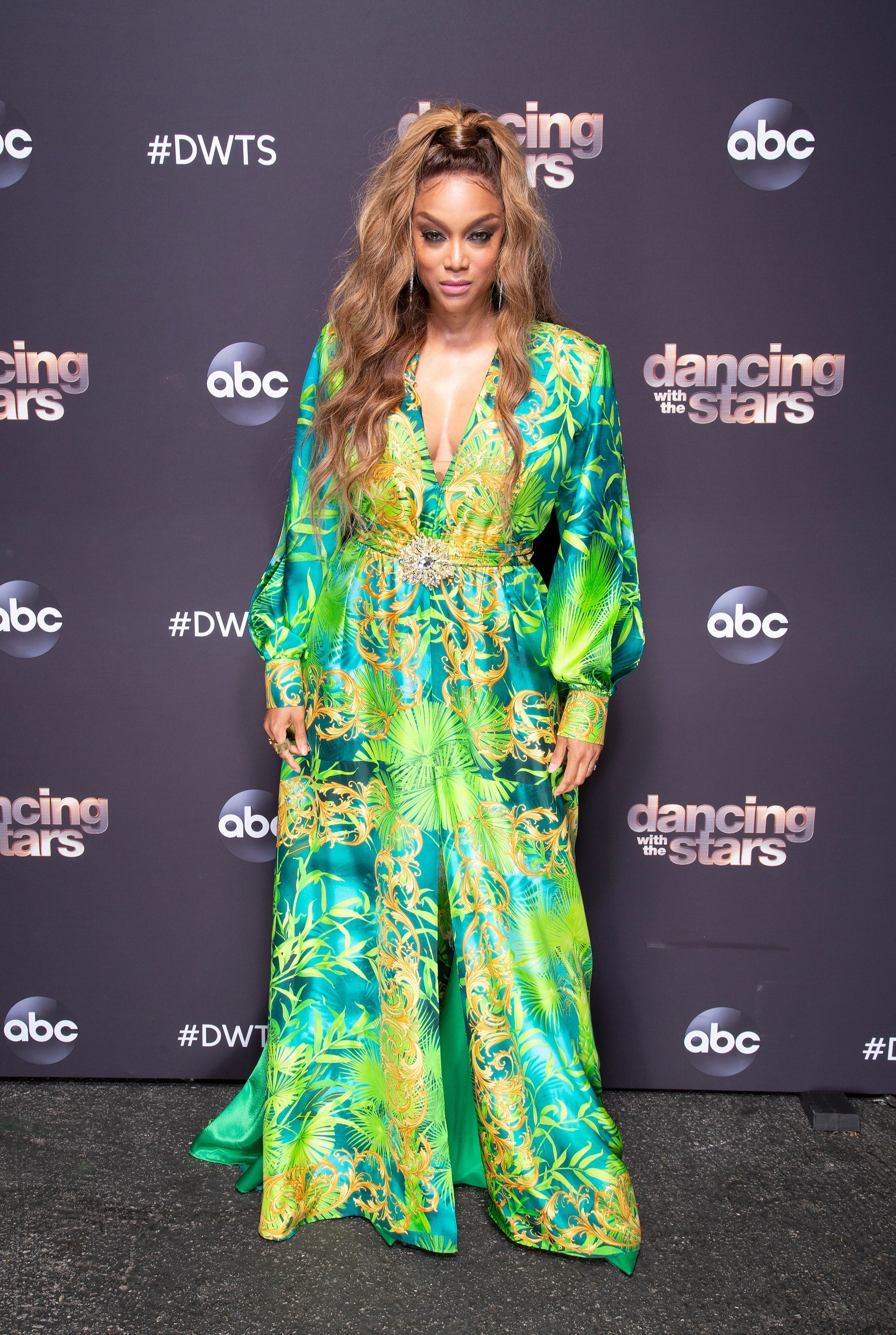 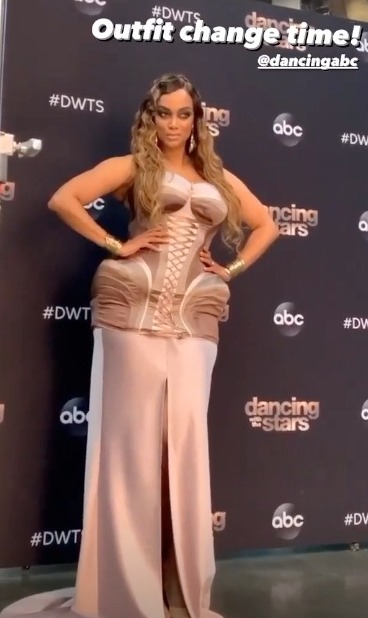