Home » TV and Movies » Death in Paradise season 10: Fans fume as iconic theme tune changed ‘What have you done?’

Death in Paradise season 10: Fans fume as iconic theme tune changed ‘What have you done?’

Death in Paradise season 10 kicked off on BBC One tonight and DI Neville Parker (played by Ralf Little) was joined on the island of Saint Marie by returning Detective Sergeant Florence Cassell (Josephine Jobert). The episode kicked off with an argument between two colleagues at a television news channel and then one ended up mysteriously dead. The theme tune then played out but fans of the show were quick to notice how the iconic soundtrack had changed ever so slightly and many were not happy with the new version.

During the last decade, there have been many changes and adaptations to the popular comedy-drama.

The producers of Death in Paradise announced several changes to the cast for season 10.

But one thing they left as a surprise for viewers was the new theme tune.

Since the show’s inauguration, every episode begins with introducing the characters involved in the murder. 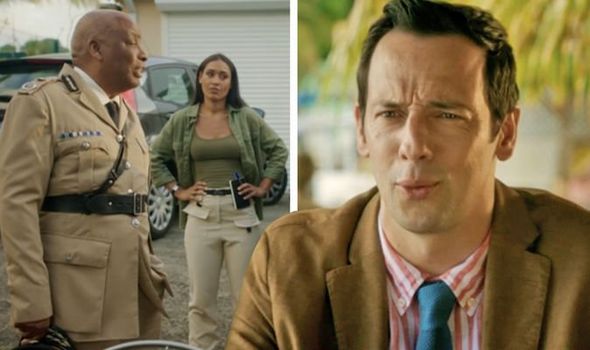 We will use your email address only for sending you newsletters. Please see our Privacy Notice for details of your data protection rights. Death in Paradise season 10: Neville Parker ‘rejected’ by Florence

The credits then play out accompanied by the theme tune.

But this season, it seems the producers have decided the melody needs a revamp – but fans were not happy by the tune’s modernisation.

Taking to Twitter to comment, one said: “After everything that’s been happening, and they go and make a new arrangement of the #DeathInParadise theme tune. Why would you even do that?”

“Sorry but the old theme tune was far better! A completely different, more catchy beat!” Someone else commented.

“We don’t like the new #deathinparadise theme tune…” One chimed.

“@BBCOne What have they done to the theme tune?! #deathinparadise,” another tweet read.