Death in Paradise fans rejoiced on Thursday night when the show returned to BBC One with a brand new series. Ralf Little was at the helm playing DI Neville Parker and Josephine Jobert returned to the small screens as DS Florence Cassell. Earlier this month, the broadcaster announced they had commissioned season 11 and 12 of the popular comedy-drama but it seems someone else will be playing the lead character after Ralf spoke out about his contract.

Many fans were left wondering whether season 10 of Death In Paradise was going to be the end of the show altogether.

It came after several famous faces signed up to appear as guest characters involved in the standalone murders which occur each episode.

With so many well-known actors taking part, many viewers thought BBC bosses were either celebrating their anniversary in a big way or going out with a bang.

In a statement, Executive Producer Tim Key spoke about the show and its future.

He said: “We are hugely proud of series 10 and delighted we’ll be heading back to Saint Marie to continue the story. 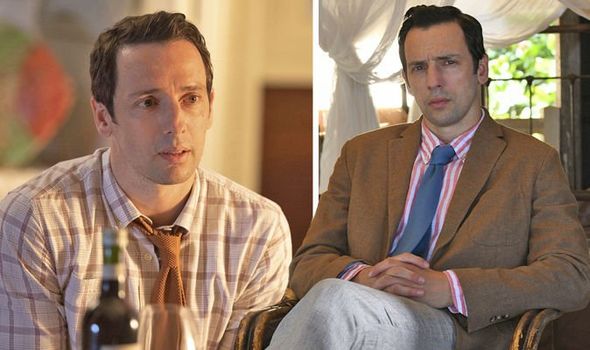 We will use your email address only for sending you newsletters. Please see our Privacy Notice for details of your data protection rights. Death in Paradise season 10: Who is in the cast of Death in Paradise?

“Our amazing cast and crew have delivered against the odds this year and we can’t wait to get going again – we’ve got huge plans for the future, with lots of surprises to come.”

BBC Commissioning Editor Tommy Bulfin added: “We’re really proud of Death in Paradise and know how popular it is with viewers, offering some much-needed escapism as well as compelling whodunnits and deeply satisfying plot twists.

“We hope audiences enjoy the 10th-anniversary series starting tonight, and they have lots to look forward to with series 11 and 12.”

But it seems Neville won’t be the Detective in charge of the Saint Marie police station, helping solve the island murders for the next two seasons. 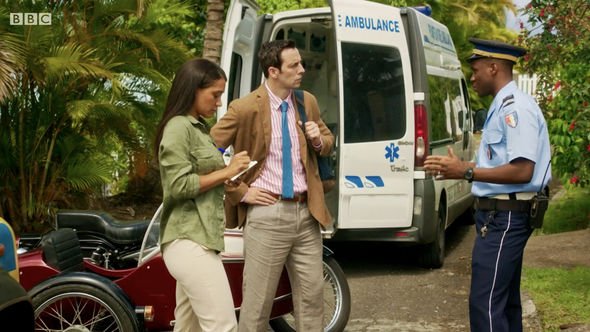 He appeared on Graham Norton’s self-titled Virgin Radio show today where he discussed his future on Death in Paradise.

The chat show host – who made his debut – was encouraged to sign up to the show for a cameo role if the BBC ever came knocking.

Ralf explained: “It’s the cushiest, we’ll have to get you on as a victim…

“If you’re the murder victim, you do about a day and a half filming at the start to do the preamble and the setup and then if you if you’re called it for another day.

“It’s basically just lying around and they sort of come and fan you.”

One of season 10’s guests, Jason Manford, was unable to keep his appearance a secret.

“We’re asked to try and keep everything as much of a secret as possible and not mention that you’re on the show but Jason during lockdown when no one could fly anywhere pretty much apart from for work, he did a picture of himself going just off to film a TV show. And I think he even said in Guadaloupe,” Ralf added.

As for how filming was, Ralf and the rest of the cast and crew had to adhere to strict rules.

“We shot the whole thing under Covid-19 protocols,” he told Graham.

“We couldn’t believe our luck. It was an amazing achievement because we started filming two months after we planned and we still managed to finish it in time to broadcast it at the same time as we would every year…

“I’ll be back next year but I don’t think I’m signed for the two years.”

Does this indicate that Ralf is will pass over the baton for series 12 of Death in Paradise?

Death In Paradise returns on Thursday at 9pm on ITV and The Graham Norton Radio Show airs every Saturday and Sunday from 9.30am-12.30pm on Virgin Radio.

Related posts:
Teresa and Joe Giudice Share Sweet Tributes in Honor of Daughter Gia's 20th Birthday
Watch 'Tiger' Online: How to Stream the Tiger Woods Documentary Free on HBO Max
Popular News
Chelsea start delayed in first AND second half as 'dodgy clock' in Luton dressing room keeps Lampard's men waiting
24/01/2021
Man Utd wonderkid Ramon Calliste, called ‘the next Giggs’, now owns luxury watch business and makes £5m a year – The Sun
26/03/2020
Megan Thee Stallion Addresses Criticism Over Twerking: ‘I Love to Shake My A**’
26/03/2020
Police guard shops to stop coronavirus panic-buyers and enforce social distancing – The Sun
26/03/2020
Coronavirus: Good Morning Britain’s Dr Hilary reveals ‘game-changing’ self-testing kit
26/03/2020
Recent Posts
This website uses cookies to improve your user experience and to provide you with advertisements that are relevant to your interests. By continuing to browse the site you are agreeing to our use of cookies.Ok