Dan Walker, 43, featured on BBC Breakfast in a different role from host as he appeared as a guest on the show to reveal what was coming up on Football Focus. The presenter spoke with sports journalist Mike, 54, about what BBC viewers could expect to watch from his show from 12pm and discussed some of the latest headlines coming from the sporting arena. However, the broadcaster was clearly uncomfortable sat in his seat and it wasn’t long before he explained to those watching at home he was sitting on a cushion to make him look taller.

Speaking from another location due to social distancing rules, Dan said: “This is what’s happened this morning.

“I’ll just give you a quick window into this world. The [original] chair is too tall for me to sit on it.

“So, I’m sitting on a small chair with a cushion,” he declared, to which Mike asked: “You need a cushion? I’ve never known that before.”

The Football Focus star then demonstrated how low down he was when sitting on the chair without the aide.

“An emergency cushion has been brought in,” he remarked, with the sports journalist adding: “I promised I haven’t been fiddling with it.” 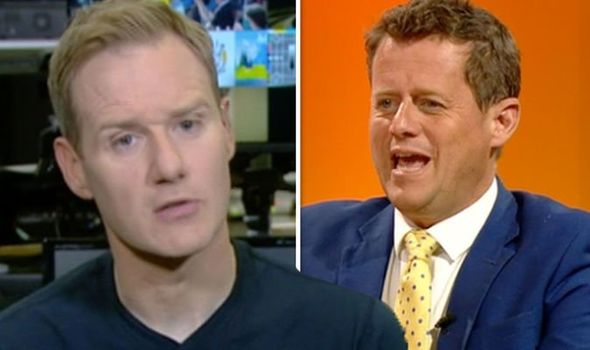 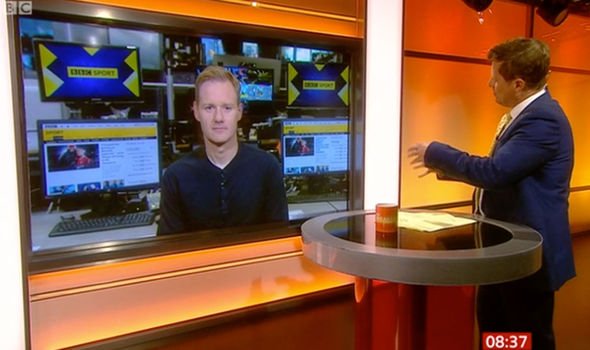 Mike then issued his warning as he realised his co-star was speaking from the location he usually reports from.

“And don’t you dare touch my breakfast,” he quipped, with Dan telling him not to worry as the food was “on its way up”.

The pair then got back on track as they discussed some more headlines coming from the sporting arena this weekend.

However, Mike did reference the backstage secret at the end of the conversation as he told him to “take his cushion away”. 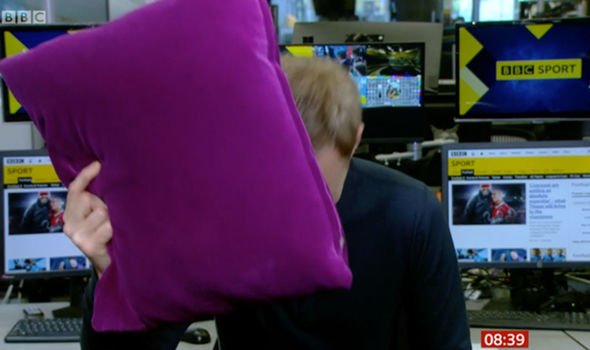 Don’t you dare touch my breakfast

“I don’t think I will need it. I’ll adjust the chair,” the sports journalist remarked with his co-star chuckling away.

Earlier this week, Dan was forced to issue an apology as those watching at home spotted him doing something usual whilst presenting.

During Wednesday’s programme, some viewers noticed the host was picking out of his teeth on the programme.

The Football Focus star was joined by Louise Minchin, 52, and shortly after they came off air, a fan wrote on Twitter: “What was it, muesli or toast crumb stuck between your teeth?”

Responding to the query, the presenter posted: “I think it was last night’s kebab,” followed by a laughing face emoji.

“I forgot I was on telly for a moment #BBCBreakfast,” he added, but this wasn’t the first time this week he had to clear things up for viewers.

Another fan noticed the hosts were reading from what appeared to be new laptops whilst updating those at home on the latest headlines.

Dan rectified any confusion as he explained to the fan on Twitter the laptops had just been given a little makeover.

The familiar face has previously spoken out about training to become a journalist, having been a part of the BBC team for over a decade.

“I did the Broadcast Journalism MA at Sheffield the first year they ran it so was very much a guinea pig.

“I just missed out on the BBC Trainee Scheme during the course (I ate the examiner’s lunch by accident, which didn’t help) but the most valuable part of the course was the work experience.

“That gave me a real idea of what working in the industry would be like. When I did get a job, I felt like I was already up and running,” he explained in a post on The University of Sheffield’s website.

BBC Breakfast airs weekdays at 6am on BBC One.

Related posts:
BLM activist in Indiana admits to being a race faker
Willie Carson blasts BBC for axing Barker from Question Of Sport
Popular News
Azerbaijani president lays out conditions for Armenia cease-fire
23/10/2020
Man Utd wonderkid Ramon Calliste, called ‘the next Giggs’, now owns luxury watch business and makes £5m a year – The Sun
26/03/2020
Megan Thee Stallion Addresses Criticism Over Twerking: ‘I Love to Shake My A**’
26/03/2020
Police guard shops to stop coronavirus panic-buyers and enforce social distancing – The Sun
26/03/2020
Coronavirus: Good Morning Britain’s Dr Hilary reveals ‘game-changing’ self-testing kit
26/03/2020
Recent Posts
This website uses cookies to improve your user experience and to provide you with advertisements that are relevant to your interests. By continuing to browse the site you are agreeing to our use of cookies.Ok