Home » TV and Movies » Craig Robinson Is Ready for ‘The Office’ Reunion, but ‘What We Do in the Shadows’ Lets Him Shine

Craig Robinson Is Ready for ‘The Office’ Reunion, but ‘What We Do in the Shadows’ Lets Him Shine

In the 15 years since he first garnered fame as snarky warehouse foreman Daryl Philbin on “The Office,” Craig Robinson has solidified into the kind of deadpan talent whose very presence serves as an instant punchline. “I crave the silly stuff,” he said in a phone interview this week, tied to his guest appearance on “What We Do in the Shadows,” which he described as an opportunity “to act serious about the dumbest things.”

That much comes through with his two-episode arc, starting with Episode 3, “Brain Scrambles.” Robinson embodies Derek, the stone-faced leader of a ragtag vampire-hunting group disguised as a mosquito fan club on Staten Island. Derek’s appearance plays a key role in enabling a major character to enter new terrain: Weak-kneed familiar Guillermo (Harvey Guillen) has been struggling with his own impulses after discovering that he’s a descendent of vampire killer Van Helsing, and while scouring the island to find virgins for his blood-sucking masters, he happens upon a new opportunity. Suddenly, Derek becomes Guillermo’s pathway to realizing his potential, and Robinson immediately synchs with the show’s kooky energy.

“These people make me laugh,” said Robinson, a Second City veteran, referring to show creator Jemaine Clement and director Kyle Newacheck, with whom he’d collaborated before. “They create this playground of fun, trust, joy, and silliness, so it was easy to drop in and just do my thing.”

Plenty of Robinson’s improvisatory bits made the final cut, including one gut-busting moment when Guillermo walks in on the group during a ridiculous call-and-response session: “What if it’s a baby vampire?” Derek asks. The response: “Kill!” “What if it’s an old lady vampire?” “Kill!”

Robinson cracked up while recalling the bit. “Just before the cameras started rolling I said, ‘Look, I’m going to ask you some questions,’” he said. “Just say ‘kill!’ each time, and be dead serious about it. It’s that kind of stuff they left in and it makes me beam on the inside.”

Robinson said he embraced the opportunity to play a character unaware of the show’s wider circumstances, a feat made all the more workable because he hasn’t actually seen the first season. “I still haven’t binged it,” he said, “but that’s next on my list.” 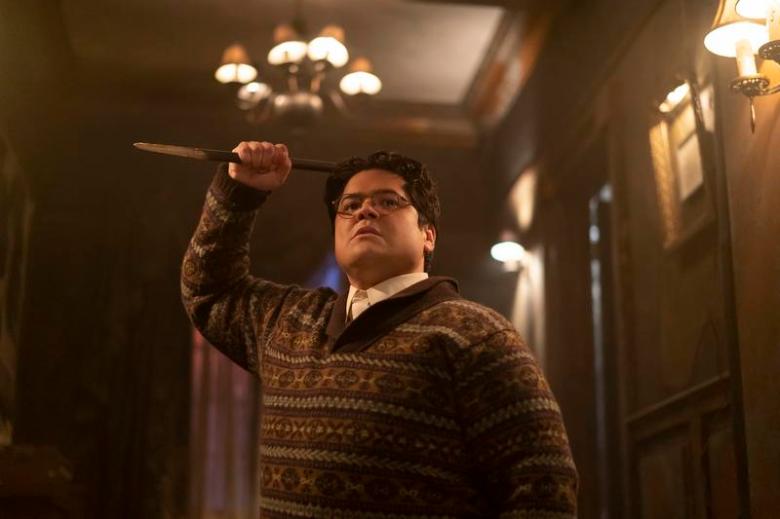 “What We Do in the Shadows”

Robinson’s performances range from the zany henchman of “Pineapple Express” to the lovable partier of “Hot Tube Time Machine” and the wily convict Doug Judy in “Brooklyn 99,” but he always radiates the kind of inviting charm that suggests he’s having as much fun playing the part as you are watching him. Still, there are sufficient variations between these performances, enough to show the efforts of a comedic actor reticent to repeat himself.

“You don’t even want to know some of the stuff I pass on, man,” he said. “Sometimes I pass on scripts that are great but I’ve just played a character similar to it. Or sometimes it’s stuff I don’t want to be associated with. I tend to choose things that make me laugh out loud when I’m reading it or evoke some other kind of emotion — a page turner, or something that makes me cry. It’s always something I’m invested in.”

However, Robinson said the explosive popularity of “The Office” didn’t lead to endless attempts to borrow its style, in part because “The Office” was hardly the first program to bring the mockumentary form to television. Robinson himself got his start with a bit part on “The Bernie Mac Show,” which predated the American version of “The Office” by several years.  “Bernie did it before, and everybody kind of follows everybody else,” Robinson said. “I like the device and I think it helps the story along. I don’t think anyone is really like, ‘Oh, let’s just do ‘The Office.’”

He has yet to hear about any plans for an “Office” reunion, but remains open to the possibility. “Hey if they call, I’ll come out and support,” he said. “I haven’t heard anything except the rumors.” But he has some ideas for where his character might end up: “Darryl was already rising through the ranks, starting that company with Jim, so he’s probably part-owner of a team right now.”

Like everyone else on the planet, Robinson has been grappling with unusual times and doing his part to support struggling comedians. Three weeks ago, he participated in a live-streamed “Laugh Aid” to support out-of-work comics, and shows up every afternoon at the Laugh Factory for its livestream.

“Some people are losing their homes and living paycheck to paycheck,” he said. “But the comics I’ve come across have all been in good spirits. Nobody’s been like talking about struggling, but I’m sure they’re out there.”

As for his own career, Robinson continues to juggle familiar comedic turns in tandem with expanding his range. He’s still buzzing about last year’s supporting role in “Dolemite Is My Name,” where he got to share screen time with Eddie Murphy in a more grounded biopic. (Technically, it was Robinson’s second collaboration with the actor following “Shrek Forever After,” but they never actually connected at that time.)

“I don’t know if I’ll go through anything like that again,” he said. “I had to become a better actor to get over, ‘Oh my god, this is Eddie Murphy.’ I thought about every character that has influenced me in my comedy, in my acting. Here was the epitome of it all and I have to say these words with him so let me get over myself.”

Meanwhile, he already has another curveball in the can as a police officer tracking a woman who escapes from a mental asylum in Ana Lily Amirpour’s upcoming “Mona Lisa and the Blood Moon,” which marks the first feature from the Iranian-American director since 2016’s “The Bad Batch.” Robinson compared the project to his work on “An Evening With Beverly Luff Linn,” another outré comedy with surrealist twists. “Ana Lily Amirpour is dope,” Robinson said. “She’s an amazing director and a real ball of energy. Some pretty crazy things happen in that movie.”

Robinson is no stranger to dramatic material, with his bittersweet turn as the single dad of “Morris From America” proving his bonafides. However, asked to choose one under-appreciated performance he wished more people would check out, he had an unexpected response. “See ‘Rapture-Palooza,’” he said, referencing the 2013 comedy he starred in opposite Anna Kendrick and others. “I play the antichrist who later becomes the devil. I’m telling you, it’s worth checking out. It’s a small movie, and we had a lot of freedom.” He chuckled. “But it’s not that different for me on the big projects. I get away with some stuff on those, too.”

“What We Do in the Shadows” airs Wednesdays at 10 p.m. ET on FX and is available to stream on Hulu the next day.