Countryfile: Matt Baker stunned as guest loses control of sheep ‘What a nightmare!’

Countryfile viewers tuned in for the annual One Man and His Dog competition this evening as they watched the best competitor from England, Wales, Scotland and Ireland compete. However, host Matt Baker was left stunned when Irish shepherd Allistair Lyttle and his sheepdogs Mick, Meg and Sweep struggled to control their flock of sheep in both rounds of the BBC competition.

After the first round, Ireland was in fourth place but Allistair tried to turn it around in the notoriously difficult Brace round.

Matt commented: “Well Allistair will be disappointed to find himself trailing at this point.

“He’s known for the singles, a former national champion but it just didn’t happen for him today.

“Well, now he’s got a mountain to climb as this will be his first competitive Brace outing. 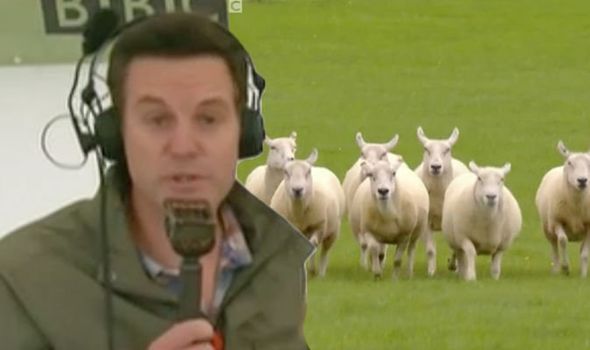 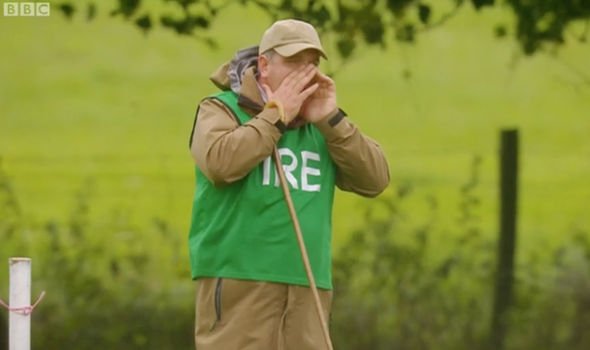 “It’s certainly a high-pressure situation for your Brace debut,” he added.

Allistair used two younger dogs for his Brace round but the gamble didn’t pay off.

In the grounds of historic Hardwick Hall in Derbyshire, Allistair struggled to get sheepdog Meg to obey his commands.

In the first section of the course, Meg received two out of a possible 20 while Sweep received 17. 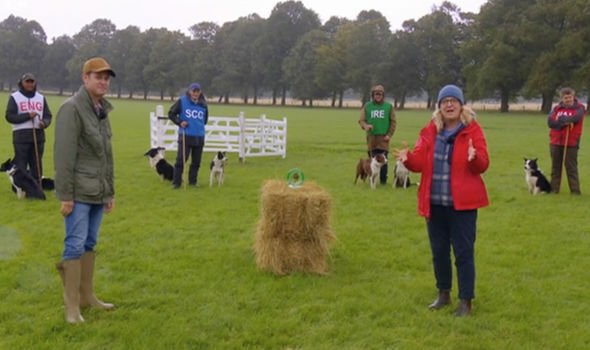 One of the ewe’s seemed to take exception to the red and white-coated Meg and the competitor struggled to get the sheep back in control.

“There is that train of thought that people think red dogs are almost like a fox so they would turn and be more protective,” Matt explained.

“Poor Allistair he had a nightmare in the singles and now here he is. I thought his luck may have turned.”

Allistair was forced to call his dogs away as he was unable to complete the course.

“We haven’t put you off?” host Charlotte Smith asked and he replied: “No, definitely not we’ll be back again.”

Ultimately Scotland won the competition with 175 points with Wales close behind with 173.

One said: “Oooh #countryfile One Man and His Dog. Used to love this when it was one every week. I especially like the bits where the doggie loses the sheep.”

Another shared: “Enjoyed that one man and his dog #countryfile … how close was that?”

“I have no idea what’s going on but this sheepdog competition is first-class #countryfile #Ineedtocalmdown,” a third added.

“I bloody love when #countryfile do the sheepdog trials,” someone else wrote.

“The most exciting thing on the telly is #OneManAndHisDog… And I’m watching it! Help!! Someone save me!! #countryfile,” a fifth tweeted.

Countryfile continues Sunday on BBC One at 5.45pm.

Related posts:
'90 Day Fiancé': Fans React to Kalani and Asuelu's Families Getting Together for a Talk
Sam Smith Drops New Track ‘Diamonds,’ Announces New Album ‘Love Goes’
Popular News
Cruise ships can resume sailing in US waters — but no passengers, yet
31/10/2020
Man Utd wonderkid Ramon Calliste, called ‘the next Giggs’, now owns luxury watch business and makes £5m a year – The Sun
26/03/2020
Megan Thee Stallion Addresses Criticism Over Twerking: ‘I Love to Shake My A**’
26/03/2020
Police guard shops to stop coronavirus panic-buyers and enforce social distancing – The Sun
26/03/2020
Coronavirus: Good Morning Britain’s Dr Hilary reveals ‘game-changing’ self-testing kit
26/03/2020
Recent Posts
This website uses cookies to improve your user experience and to provide you with advertisements that are relevant to your interests. By continuing to browse the site you are agreeing to our use of cookies.Ok