A transfixing Vicky Krieps plays the Empress of Austria who, at 40, begins to chafe against her predictably cosseted life. 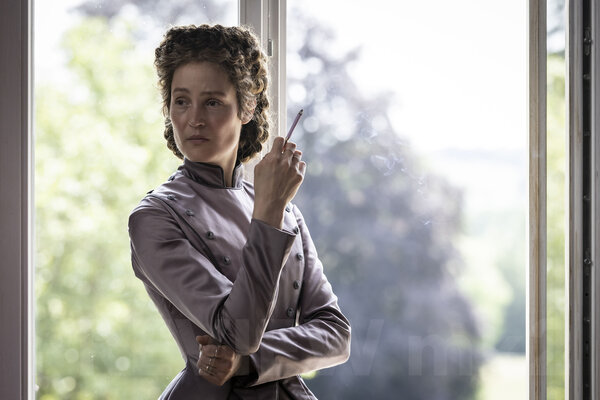 The princess industrial complex is usually associated with Disney and its procession of royal girls and women from Snow White to Ariel and Tiana. The category also works nicely for all of the many other ostensibly grown-up entertainments about girls and women with heavy crowns. Few ever seem happy with their station in life, and while some find a prince and secure a happily ever after, others break and still others mount improbable great escapes.

“Corsage” is the Austrian writer-director Marie Kreutzer’s bold, visually striking and ingeniously anachronistic portrait of an empress in complicated rebellion. The rebel — a mesmerizing Vicky Krieps — is the Empress of Austria and Queen of Hungary, Elisabeth Amalie Eugenie (1837-1898). Married at 16 to Franz Joseph, the ruler of the Austro-Hungarian Empire, Elisabeth now has two children, a retinue of servants and no obvious cares. A celebrated beauty, she wears tight corsets and glorious frocks, adhering to a regimen of regular exercise and a diet that often consists of little more than beef broth and the slenderest of orange slices.

Elisabeth is whisper thin, but something other than vanity and social mores is eating away at her — boredom, despair, a sense of purposelessness — sending uneasy ripples through her life. “She scares me so much,” a maid timidly whispers of Elisabeth, who’s first seen submerged in the royal tub, the camera pointing down at her. Her eyes are open, and she’s holding her nose, timing her breath ostensibly for health reasons. It’s both a useful exercise and a suitable metaphor for “Corsage” (the word also means the bodice of a woman’s dress), especially given Elisabeth’s penchant for tightlacing her corset, which tests her very breath.

“Corsage” takes place over a number of months starting in late 1877, the year Elisabeth turns 40. Hers is a predictably cosseted, sumptuous life. (The locations include the Hapsburg Palace in Vienna, the former principal residence for the titular dynasty.) Kreutzer — this is her fifth feature film — charts the coordinates of Elisabeth’s quotidian reality from the get-go, briskly presenting its luxuries but also, importantly, letting you see how at ease Elisabeth is in this rarefied world. It’s clear that she lacks for nothing, at least materially. From the way that she holds her head, directs her gaze and impatiently speaks to her maids and ladies in waiting, it’s also evident that she isn’t chafing against her entitlements.

With wit, a cool eye and fluid precision, Kreutzer tracks Elisabeth across the next eventful months. Turning 40 proves a difficult milestone for the queen and disrupts her life, though not always for the worse. She’s already a subject of gossip inside and outside the palace, and her weight, habits and appearances can set tongues wagging. The pressure of getting older only makes matters worse. At 40, Elisabeth says in voice-over, soon after blowing out her birthday candles, “a person begins to disperse and fade.” Her distress is palpable, and it’s no wonder, given the creepy, slightly comic, near-threatening song that Franz Joseph (Florian Teichtmeister) and others sing to her on her birthday: “Beautiful may she remain.”

There’s a knot of complication in the word “remain,” which suggests that Elisabeth is never permitted to change. That’s underscored by her regimented life — with its rituals of deference, its protocols, its quiet and violent power — which is structured to uphold the institution of the monarchy and the divine right of kings, even as the modern world shudders outside. Part of the story’s tension stems from Elisabeth’s role in the empire’s dual monarchy, which makes her leader of two countries she has no real say over. Her realm is the rooms she occupies; her subjects, her staff. She oversees her children, but Franz Joseph is the king.

Elisabeth’s rebellion isn’t overt and obvious; it comes in stages, in small and large gestures, in furtive cigarettes, reckless flirtations and wild gallops across far-off fields. Krieps is wonderful to watch in motion, whether she’s in the saddle, crossing swords or just leaving a dinner. But she’s a virtuoso of stillness, and at times she brings to mind old Hollywood sphinxes like Garbo and Dietrich, whose inscrutable faces worked like wonderful screens on which you could project whatever fantasies you wanted. Yet Krieps is also a performer of the present moment, gesturally and otherwise, which is ideal for a character who’s caught between the old world and the new, and between the privileges that at once exalt and suffocate her.

“Corsage” opens and closes with Elisabeth facing watery voids, ambiguous visions that speak to her desire for change, perhaps transcendence. Visions of escape run through stories about unhappily pampered women. Rarely, though, do the gilded agonies, especially of princesses and queens, offer real surprises, partly because anything too alien would break the profitable (binge-worthy) illusion of the relatable royal. Kreutzer retains a critical distance from Elisabeth; she’s sympathetic and skeptical of the character, and shrewdly doesn’t try to fashion her into a martyr or feminist role model. Making Elisabeth interestingly human proves more than enough, a feat that Kreutzer and Krieps accomplish to dazzling effect.