Coronation Street resident Amy McDonald (played by Elle Mullvaney) is known for meddling in her parent’s relationship and her behaviour can be a bit out of hand. Now, it seems she will finally get her comeuppance when she throws a party behind Steve (Simon Gregson) and Tracy’s (Kate Ford) back which soon has disastrous consequences. As they arrive back to the chaos, how will they decide to punish Amy for her actions?

Amy is a popular teen in Weatherfield and has a big group of friends around her as she comes towards her last years of school.

The teen is best friends with Asha Alahan (Tanish Gorey) and Summer Spellman (Matilda Freeman) but their friendship will be tested in upcoming episodes.

They haven’t had the easiest ride in recent months as Amy discovered pal Asha was bleaching her skin after being left insecure about her appearance.

Amy couldn’t understand why her friend was hurting herself and vowed to always be there for her but will their friendship survive the latest change? 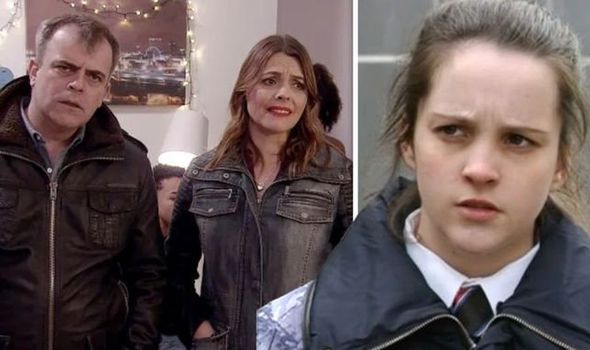 Asha is set to be involved in a new devastating plotline and Amy will see herself once more caught up a new batch of drama alongside this.

The girls are dealt a shock when Kelly Neelan (Millie Gibson) returns in upcoming episodes in a bid to find out what happened to her dad Rick Neelan (Greg Wood) who mysteriously disappeared last year.

Kelly is unaware he was in fact killed by Gary Windass (Mikey North) and tells the pair she has changed schools and quickly settles back into their friendship group.

It doesn’t take long for Kelly to start meddling as when Amy flirts with Corey (Maximus Evans), who Asha also fancies, Kelly will clock onto the pair’s behaviour and tells Asha what she’s seen. 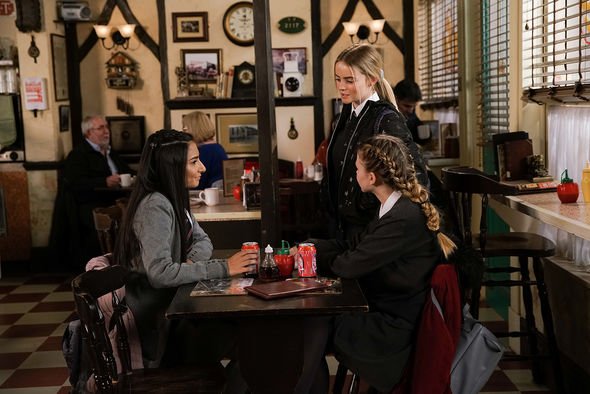 Asha will be left jealous by the news, especially when Amy and Corey decide to share a pizza together at the Barlows’ household.

Amy later decides to throw a party at their new residence of No.1 Coronation Street, inviting over all her friends in a bid to remain popular, despite not warning her parents first.

It’s far from the party Amy wished for as things soon get out of hand and she is left in a sticky situation.

Kelly is up to her meddling once more and decides to invite a group of strangers who Amy has never met before.

The gatecrashers take it upon themselves to start wrecking the house and Amy is left not being able to cope with the situation.

When Corey smashes one of Tracy’s lamps, Amy is left furious and instantly blames Kelly for the mess in the house but it’s not long before there’s drama elsewhere.

It comes moments after Asha confides in her best friend she has flashed to Corey on FaceTime and it isn’t long before she is forced to deal with another difficult situation.

The pictures from Corey’s phone are sent to a huge group chat and Asha soon picks up on what’s happened when the gatecrashers are staring at her.

The teen is left devastated by the leaked photos after trusting Corey and Dev (Jimmi Harkishin) soon calls by No.1 to grab Asha and take her home.

Asha soon sees the extent of the leaked pictures when she checks her phone – will she speak out about what’s happened to her?

Meanwhile, a blissfully unaware Steve and Tracy are horrified to see a police car at their house just as they arrive home from their break to visit Daniel Osbourne (Rob Mallard)

Tracy and Steve quickly take it upon themselves to throw the uninvited guests out of the house and order Amy to start clearing up.

However, with Amy’s behaviour in question, will the pair stop her from having a social life and ban her from having fun with her friends as they worry about the consequences?