BBC Breakfast viewers saw Louise Minchin and Dan Walker back on the sofas for the first instalment of the BBC News programme this week. As ever, the pair were joined by a range of guests including Culture Secretary Oliver Dowden. And Carol joined the pair to provide regular insight to viewers over the day’s weather. But when Dan questioned whether they should “get the weather” [forecast], Carol jokingly reminded him: “I don’t think you’ve got a choice, Dan!”

At one point, it was time for another weather update from Carol Kirkwood moments after getting a sports update from co-star Sally Nugent.

“Should we get the weather?” asked Dan.

“Let’s do that,” agreed his co-star Louise, leading him to hand over to Carol moments later.

Dan continued: “Where’s Carol? What have you got for us this morning? What’s happening out there today?” 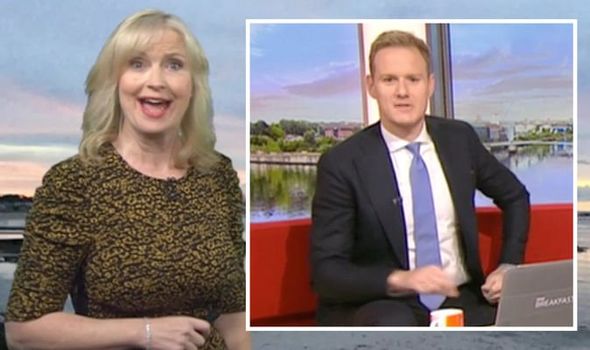 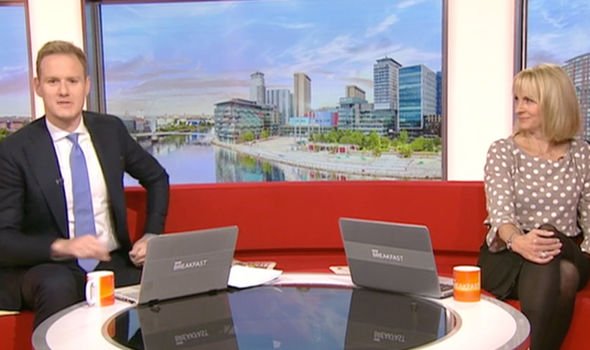 She joked: “I don’t think you’ve got a choice, Dan, you cheeky thing! I’m here whether you like it or not!”

And she soon moved on with giving those watching at home the lowdown on the forecast for the rest of Monday. 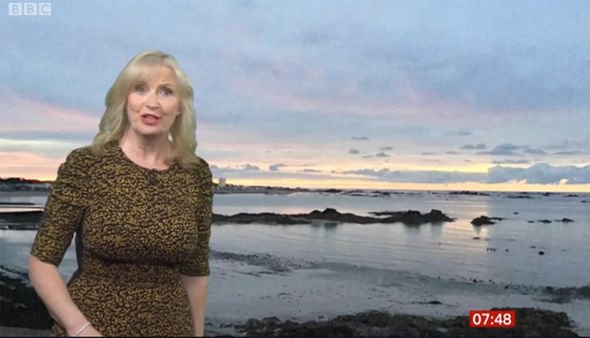 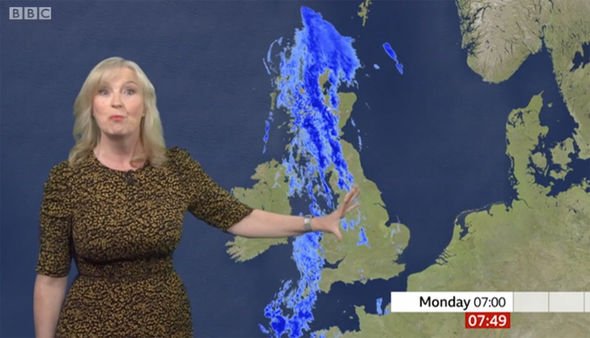 “It’s not a bad start to the day for some of us, you can see lovely skies here in St Helier in Jersey,” she noted – pointing to a snap from a viewer.

However, she soon issued a warning to some other viewers across the country.

“But for others, we’ve got some rain! Rain in the west is going to be moving eastwards for most of us as we got through the day.

“What’s happening is we’ve got a clutch of weather fronts moving in from the west,” she noted.

Explaining when there was rain on the horizon, she continued: “We’ve got a little bump of high pressure in the south-east.

“This means for some eastern areas there’s a dry and bright start – but it won’t last.”

Pointing to map behind her, Carol said: “You can already see some rain the north and the west continuing its journey and moving eastwards.

“We’re also looking at brisk winds north-easterly, 40, 50 miles per hour… the rain is continuing to drift towards eastern parts of England…”

Carol went on to explain how the west of the UK would experience some brighter weather later in the day as the rain moves towards the east.

The weather presenter told viewers there would be highs of 14 degrees today and would feel “cool” especially for those areas with more cloud.

She went on to add: “Now through this evening, we say goodbye to the first batch of rain but you can see it still is coming in across the south-east, northern areas and Scotland.

“We could just see temperatures dip low enough for a touch of frost!” she concluded.

BBC Breakfast airs daily from 6am on BBC One.

Related posts:
Who is Will Arnett and what’s his SmartLess podcast? – The Sun
Why Trump’s ‘live’ Fox News health check is raising eyebrows
Popular News
Watch England’s Vitality Roses taking on New Zealand, live on YouTube
30/10/2020
Man Utd wonderkid Ramon Calliste, called ‘the next Giggs’, now owns luxury watch business and makes £5m a year – The Sun
26/03/2020
Megan Thee Stallion Addresses Criticism Over Twerking: ‘I Love to Shake My A**’
26/03/2020
Police guard shops to stop coronavirus panic-buyers and enforce social distancing – The Sun
26/03/2020
Coronavirus: Good Morning Britain’s Dr Hilary reveals ‘game-changing’ self-testing kit
26/03/2020
Recent Posts
This website uses cookies to improve your user experience and to provide you with advertisements that are relevant to your interests. By continuing to browse the site you are agreeing to our use of cookies.Ok