The reality star tweeted about the “stupid a**” reunion, revealing she wasn’t “even excited” about it.

While she didn’t specify whether it was virtual or in person, given the country’s climate right now, chances are the girls were all together in a virtual atmosphere.

This season of Teen Mom 2 hasn’t been too bad for Briana DeJesus.

Well, if you don’t count the clap that her second baby daddy, Luis, gave her. Yeah, that happened while she was filming Season 10A, which led to it being broadcast to the world.

Aside from that, most of this season has been positive for Briana. From Devoin spending more time with Nova to buying and moving into a new house with her mom and sister, things have been on the upswing.

Her tweet about the “stupid a**” reunion came out of the blue. If the girls are all in a virtual space, the drama will be minimal.

Briana did have some wild reunion confrontations, but this time, that won’t happen. She has kept to herself, for the most part, staying out of drama on social media. 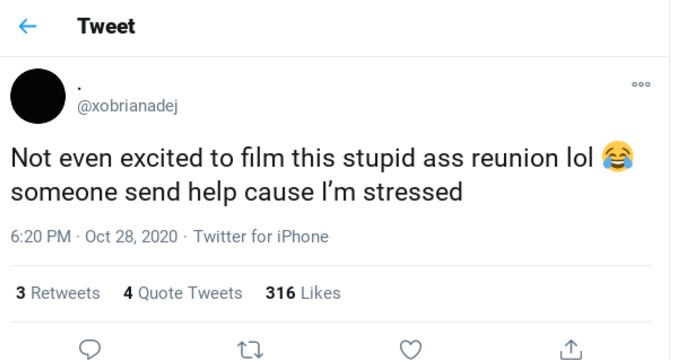 What’s next for Briana DeJesus and Teen Mom 2?

Right now, Teen Mom 2 was picked up for Season 10B, but after that, the show is up in the air. She will likely be returning as there hasn’t been news otherwise.

Chelsea Houska told all of the girls that she was exiting following the reunion, her last episode filmed.

The ladies will likely have to self-film part of the season if they haven’t started already. Briana DeJesus was just moved into her house when the footage from this week aired. She was having Thanksgiving at her house, which has been almost a year now.

With her daughters growing up and her life being semi-normal these days, things seem to be going well.

Even though Briana didn’t want to film the Teen Mom 2 reunion, she did.

Typically it airs a month after it is taped. Things didn’t go smoothly with Kailyn Lowry and Briana, but that isn’t shocking to anyone who has been following the women and their dislike for one another.

It looks like some things may never change, even if the situation as a whole does.