February is the cruelest month for new film releases, and director Tate Taylor’s “Breaking News in Yuba County” is easily one of the worst cinematic gestures of the year so far. Allison Janney, Regina Hall, Juliette Lewis, and a cast of many more familiar (and typically welcome) faces lead a big ensemble of unlikable, unsympathetic characters in a deeply unfunny media satire that’s a mess from top to toe. It’s the kind of movie that seems to suck your soul out while you’re watching it, variably crass and slapstick humor landing with a bloody thud.

Perhaps some audiences will jive to the plot holes visible from outer space that perforate this movie written by “South Park” story editor Amanda Idoko, but Taylor does not understand how to make a pileup of errors and misunderstandings amid a folksy collective work the same way that, say, the Coen brothers do. Still, actors clearly enjoy working with the “Get on Up” and “The Help” filmmaker, as this is a cast on the level of “Mars Attacks!” in terms of celebrities who come and go with little pageantry, or impact, across the screen. Sue Buttons (Janney) is a lonely housewife whose smarmy husband Karl (Matthew Modine), a bank executive with a dirty conscience, wants nothing to do with her, and neither does the rest of the world. A broken-down, glass-eyed homemaker who could almost elicit pity if she weren’t so helpless and sorry-feeling for herself, Sue grins and bears it through the day by repeating manifestation affirmations like “I am important, I am strong.”

Well, her wish is her command, because on Sue’s birthday, she catches Karl in the act of some rowdy coitus at the Good Times Motel with Leah (Bridget Everett), and he drops dead before her eyes. Sue, seeing an opportunity sparkle before her, somehow musters superhuman strength to haul and bury his corpse, and parade a poor-me abduction charade in front of the local media and police, almost overnight transforming into a fabulous actress (or deft sociopath) capable of pulling the wool over the eyes of her community. That includes her charlatan broadcast journalist half-sister Nancy (Mila Kunis), and southern-fried media personality Gloria Michaels (a typically florescent, scene-chewing Juliette Lewis), the local Nancy Grace-style sensationalist talk show host currently devoting most of her airtime to the disappearance of a 13-year-old girl named Emma Rose. 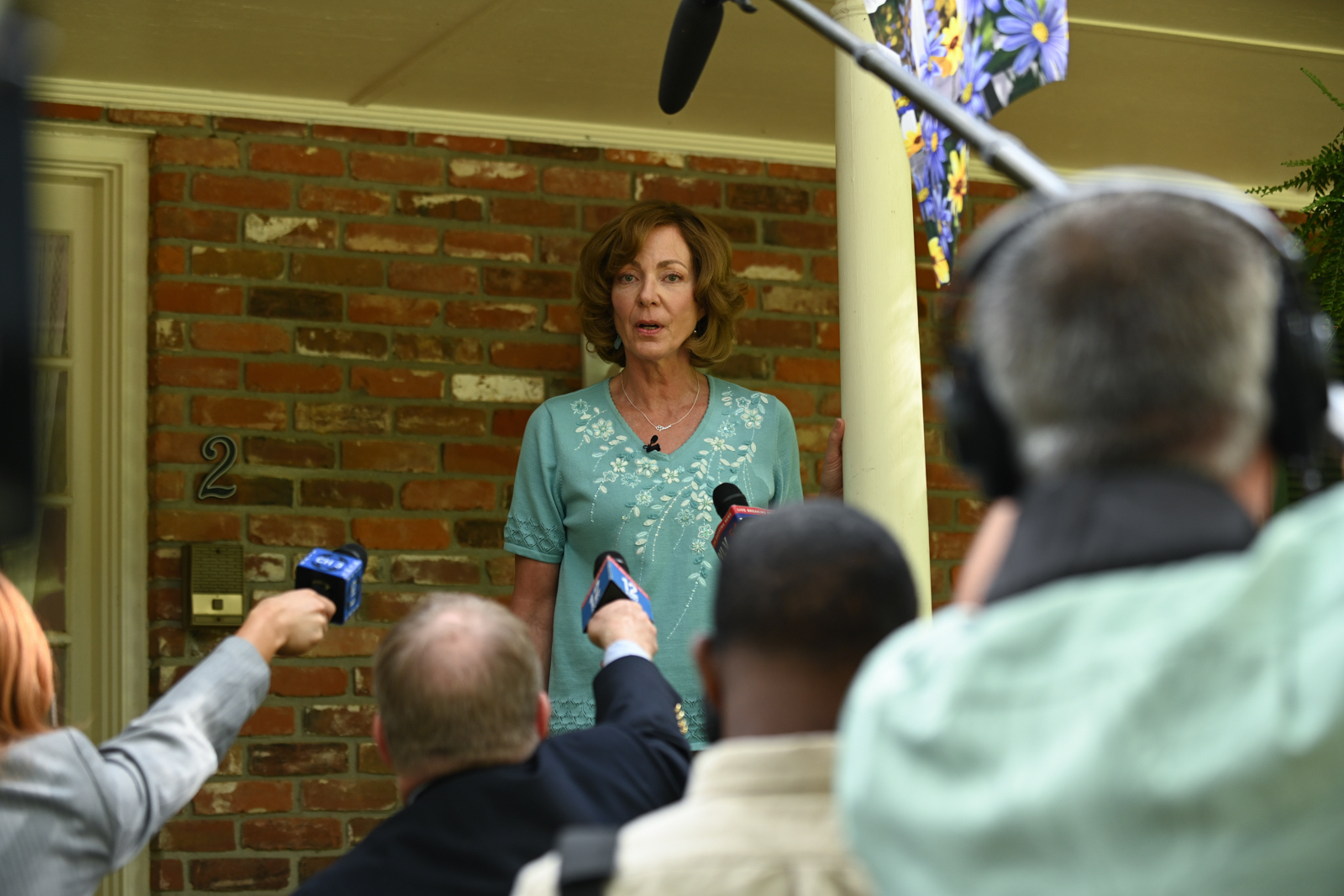 With little life of her own to claim, Sue hastens to usurp the spotlight, and the lies start falling out of her mouth like melted butter to keep the media’s eyes glued to her as she mourns her “missing” husband, and accepts servings of sympathy and chicken tetrazzini from the locals who used to ignore her. The movie barely digs into what could’ve been a campy satire of the tabloid media, and of our collective addiction to tawdry missing-persons stories, even as Lewis’ Gloria Michaels starts to recall Missi Pyle’s trash-chasing Ellen Abbott in “Gone Girl.”

Meanwhile, there’s a clown car of other characters waiting to be unleashed, and their positions in the overall narrative become almost dizzyingly impossible to trace. There’s Sue’s brother-in-law Petey (Jimmi Simpson), a sad sack who runs a furniture store with his mouthy, crooked associates Rita (Wanda Sykes) and Debbie (Ellen Barkin, completely wasted save for one moment where she flies into the frame with a machete). Then there’s wannabe-gangster Mina (Awkwafina) and her partner-in-crime Ray (Clifton Collins, Jr.), capitulating to the demands of her crime lord father (Keong Sim) after messing up a money-laundering scheme with Karl as half-cooked as the plot itself. Then there’s detective Cam Harris (Regina Hall, in a ghastly mullet), who’s onto Sue but can’t seem to get any of her colleagues to believe her. As the body count rises, it’s a relief, even as the movie lurches toward its inexorably predictable conclusion, to see these folks get picked off.

That’s about the only joy to be had in 90 overstuffed minutes of hijinks and hysteria. Why did Sue think she could get away with her grand scheme? She’s not painted as delusional, but that would be the only explanation. Janney does her tragicomic best in portraying a dotty, unraveling woman and Hall even provides a good screen partner at times as Harris begins to close in on Sue’s steaming lies.

But for a movie that has so much going on at all times on the surface, there’s almost nothing going on beneath it. Hideous lines like “Your vagina killed my husband,” which Sue screams at Leah twice after their run-in at the motel, land wincingly. And with a background in campy movies like “Ma,” you’d think Taylor would just lean into the garish trashiness of it all. But “Breaking News in Yuba County” is afraid to go there, and so you should be too. Next time you pass through Yuba County, just keep driving by.

MGM will release “Breaking News in Yuba County” in select theaters and on digital platforms on Friday, February 12.

As new movies open in theaters during the COVID-19 pandemic, IndieWire will continue to review them whenever possible. We encourage readers to follow the safety precautions provided by CDC and health authorities. Additionally, our coverage will provide alternative viewing options whenever they are available.