Many fans are calling Brandi a hypocrite since she is the one who instigated the rumors that she and Denise had an affair.

“You didn’t care when you published about you and Denise who you were hurting brandi? What’s different?” one user asked.

“The truth and a lie!” Brandi swiftly replied.

Other fans side with Brandi and claim that Denise made up the story to get revenge after Brandi exposed their alleged affair.

“Clearly Denise is on her revenge mission and coming up with any old story to take the heat off the fact SHE cheated on her husband and stuffed up a friendship as well. Team Brandi,” one fan writes. 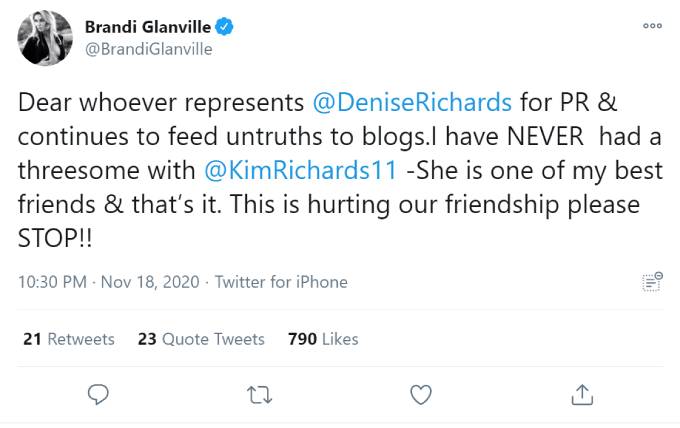 How the rumors about Brandi and Kim surfaced

Denise insinuated that Brandi has hooked up with other women from RHOBH other than her on Season 10. Ever since, then fans have been wondering whom Denise was referring to.

A source disclosed who those cast members are to Zack Peters from the podcast #NoFilter.

How the drama between Brandi and Denise started

Brandi told some of the other RHOBH women that she and Denise had hooked up. She admitted that they went all the way and that Denise asked Brandi not to tell her husband Aaron Phypers.

Denise vehemently denied the rumors and claimed that she barely ever spoke to Brandi. When the cast confronted Brandi again, she showed them text exchanges between her and Denise.

Many of the women including Kyle Richards, Teddi Mellencamp, Erika Jayne and Lisa Rinna chose to believe Brandi over Denise.

The rumors eventually led to Denise leaving the show and handing out cease and desist letters to cast and crew members.

The Real Housewives of Beverly Hills is currently on hiatus on Bravo.

Related posts:
Is There Beef Between the Casts of 'Floribama Shore' and 'Jersey Shore'?
Jordan North salary: How much does BBC Radio 1 star earn?
Popular News
Ireland vs Scotland: Live stream FREE, TV channel, team news and kick-off time for TODAY'S Autumn Nations Cup game
05/12/2020
Man Utd wonderkid Ramon Calliste, called ‘the next Giggs’, now owns luxury watch business and makes £5m a year – The Sun
26/03/2020
Megan Thee Stallion Addresses Criticism Over Twerking: ‘I Love to Shake My A**’
26/03/2020
Police guard shops to stop coronavirus panic-buyers and enforce social distancing – The Sun
26/03/2020
Coronavirus: Good Morning Britain’s Dr Hilary reveals ‘game-changing’ self-testing kit
26/03/2020
Recent Posts
This website uses cookies to improve your user experience and to provide you with advertisements that are relevant to your interests. By continuing to browse the site you are agreeing to our use of cookies.Ok