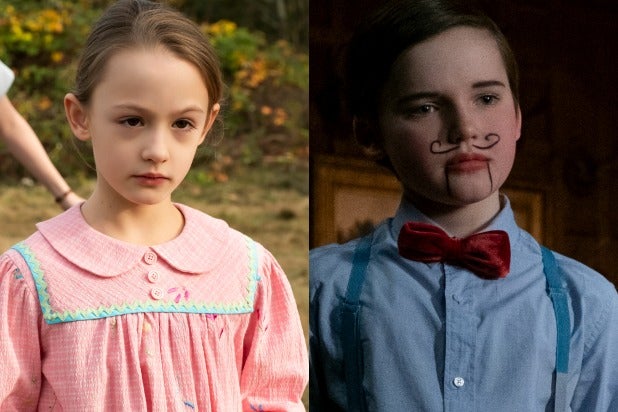 (Warning: This post contains major spoilers for “The Haunting of Bly Manor” through its finale.)

Two of the most pivotal characters in Netflix’s “The Haunting of Bly Manor” are the two youngest residents of Bly, 8-year-old girl Flora Wingrave and her 10-year-old brother, Miles, as they know more about the secrets of the chilling estate than anyone else on the grounds, including their new au pair, Dani (Victoria Pedretti). And that’s because a good chunk of the time the children are actually inhabited by two very different people: the ghosts of Peter Quint (Oliver Jackson-Cohen) and Rebecca Jessel (Tahirah Sharif).

For “Bly Manor” stars Amelie Bea Smith, 9, and Benjamin Evan Ainsworth, 12, this meant playing two parts in one, a task they took on with the help of their counterparts Jackson-Cohen and Sharif.

“It was working with Ollie to make sure we get one character and the other and splitting them,” Ainsworth told TheWrap. “So you’ve got Peter Quint, who is very dark and wants to get everything done for him and he wants to escape Bly, basically. And he’s using these people just to get what he wants and he doesn’t think about anyone else; whereas Miles, he only cares about his family and just wants to keep everyone safe.”

“I worked with Tahir a little bit, I learned so much from her,” Smith said. “Flora and Miss Jessel have some similarities, but Miss Jessel does have very good posture. And it was really cool working with her a little bit to get that right.”

Miles does some truly terrible things when he lets Peter take over his body, including murdering Bly’s housekeeper, Hannah Grose (T’Nia Miller) and giving disturbing speeches, like the one he rattles off while playing “story time” with his sister in front of the adults.

“It was a great opportunity for Peter to show his rage in his first proper thing, where you know something is wrong,” Ainstworth said. “Because before it had been like, yeah, Miles isn’t himself. But in this, you could really see the difference, and you definitely knew something was up.”

“It was a lot of fun. It’s a scene that Flora shows that she knows what’s going on with Peter Quint, but she gets more worried when Miles does that, about what’s going on and she gets scared what’s going to happen to her brother,” Smith added.

For Smith’s Flora, the hardest part about “becoming” Miss Jessel is when the little girl is “tucked away” into memories where her parents were still alive, while Rebecca is in charge of her body.

“I played it like she was really sad. She doesn’t like being tucked away and she doesn’t know what’s going on,” Smith said. “And she gets really frustrated because she doesn’t know why it happens to her and not anyone else. And she sometimes gets some sad memories that she wants to go back to that time and change what happened.”

At the end of “Bly Manor,” it’s revealed that the narrator is an older Jamie (played by Carla Gugino), who has been telling the story of Bly and its inhabitants during not just any rehearsal dinner, but that of grownup Flora, who, along with her brother, has no recollection at all of it.

Though both Smith and Ainsworth think it’s “quite sad” Flora and Miles can’t remember Hannah and Dani — the people who ended up saving them from being permanently “tucked away” into Peter, in Miles’ case, and from being drowned by the Lady in the Lake (Kate Siegel), in Flora’s — it’s also for the best.

“It’s quite sad to think about forgetting all of those people who helped them, Hannah, Dani, and all of these people who sacrificed their lives for our safety,” Ainsworth said. “It’s also good that we don’t remember Bly because of the scary ghosts and everything and Miss Jessel, and what Peter Quint did to us.”

Smith added: “I think it’s good that they don’t know, because their life when they’re older would be very different. But it also, as Ben said, is quite sad, because Dani sacrificed her life for Flora, to save her. And if Flora had known that she would have, if she didn’t know what happened to Dani, she’d try to find Dani and thank her. So it’s just quite sad how they don’t really know.

Check back with TheWrap for more “Haunting of Bly Manor” coverage tomorrow.