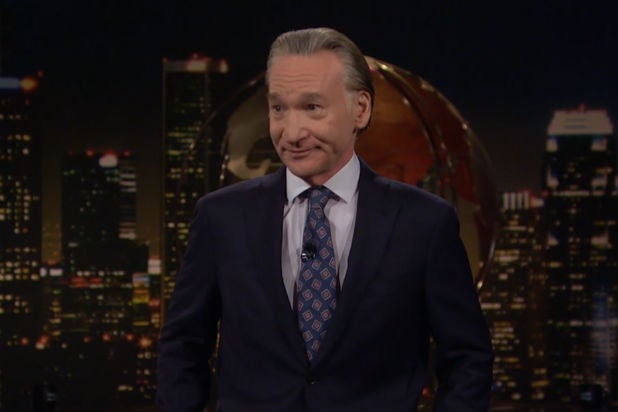 After nearly 6 months, Bill Maher took “Real Time” back to the studio Friday night for a brand new episode that contained not only live panel guests, but also an actual audience.

Of course the audience, as the camera proved at several points, were safely socially distanced but it was still a surprising sight after so many months of the show filmed from Maher’s backyard, thanks to the shutdowns caused by COVID-19.

On his first night back at his studio home, Maher spent a minute or two talking about how good it was to be home and then zipped right into the current events — which of course includes the raging west coast fires, the still-ongoing pandemic, and Trump.

“I’m so thankful you’re here. I’d say you’re very brave, but there’s like no f—ing chance you could get it. Look at you, you’re a million miles, I mean, you’ve been tested, you’re masked, you’re spread way apart. What we in the distance call ideal for comedy,” Maher joked at the beginning of his monologue.

“Boy I picked a good week to get back to the studio with people because the forecast on my phone today, I’m not joking, it said ‘smoke’. Tomorrow’s forecast; ‘Blade Runner.’,” he continued, referring to a popular and terrifying meme in which people compared the smoke-choked red skies in the San Francisco bay area caused by massive fires in Northern California to “Blade Runner: 2049.”

Of course, Maher also noted that the air in Los Angeles is only a little bit better, as the city is being inundated with smoke from several other nearby fires. “Are you from Los Angeles? You’re all local, right? Of course. Well, I mean, Jesus Christ, the air in Los Angeles, it was like a cross between Shanghai and my dressing room,” Maher joked.

“If I’m sniffly it’s because yeah, it’s because it’s s— out there. I went for a checkup yesterday to my doctor. He grabbed my balls and said, ‘Turn your head and stop coughing.’ It’s like f—ing Mars out there. Today Elon Musk looked out the window and said, ‘Finally, I’m home,’” Maher continued.

After joking that the smoke from fires in Oregon is so bad “you can barely see the tear gas from the riots” and then comparing the effects of breathing in the smoke to using cocaine, Maher brought up the news of how one of the major fires in California was started by an idiot who used explosive devices for a gender reveal party.

“And this pissed me off. I’m sure it did you too right? One of the fires — you saw this — was because somebody parents were having a gender reveal party in the park and the parents set off a smoke bomb that we would see, if it turned pink if it was a girl and blue if it was a boy. Proving once again something I’ve always said: the wrong people are reproducing,’” Maher said.

Maher then touched on rolling blackouts plaguing much of California (but, contrary to popular misconception, absolutely NOT Los Angeles), as well as the self-inflicted PR headache House Speaker Nancy Pelosi stumbled into because of a haircut. And then he turned his attention to Donald Trump.

“President Trump has been monitoring the fires very closely. He said his heart goes out to the insurance companies. Oh he’s full of empathy this guy, I tell ya,” Maher said.

“It’s 9/11 anniversary today, yeah, and Trump said he will never forget the moment when he learned that he had the tallest building in Manhattan. Trump said that. Because he’s an asshole. [crowd applauds or whatever] Sometimes you have to think twice on the thing. Modern audiences don’t get that f—in thing.”

“But, I tell ya, 2001,” Maher continued. “Were you even alive, some of you people, for that? Or you were kids? I’ll tell you, it’s such a different time. I mean back then Trump was a punchline with no interest in governing. [rubs chin] Oh yeah. 19 years. Everything is just so different. I mean back then if you ate on the sidewalk, you were either homeless or French. And if you stayed six feet away from someone it was because they smelled like Axe Body Spray. Now it’s because of the virus.”

“It’s so interesting, Dr. Fauci is in Bob Woodward’s new book. He’s got this new book about Trump called ‘Rage’ and apparently Dr. Fauci said Trump’s attention span is ‘like a minus number’. And when Trump heard that he was furious. For about a second. And then somebody rattled a bag of Cheetos and he forgot all about it,” the “Real Time” host joked.

Maher wrapped it up with a comment on some weird remarks Trump made this week: “Trump yesterday he held one of his super spreader rallies. He’s the president, he has super spreader rallies there in Michigan. And he compared his handling of the virus to FDR. The only thing he has in common with FDR is he has difficulty walking.”

Related posts:
Teen gangbanger busted for shooting after being released from juvie
Melbourne Vixens cement top spot with win over Magpies
Popular News
YETI’s Ice Pink Color Collection Has The Cutest Cooler For Your Fall Road Trip
22/09/2020
Man Utd wonderkid Ramon Calliste, called ‘the next Giggs’, now owns luxury watch business and makes £5m a year – The Sun
26/03/2020
Megan Thee Stallion Addresses Criticism Over Twerking: ‘I Love to Shake My A**’
26/03/2020
Police guard shops to stop coronavirus panic-buyers and enforce social distancing – The Sun
26/03/2020
Coronavirus: Good Morning Britain’s Dr Hilary reveals ‘game-changing’ self-testing kit
26/03/2020
Recent Posts
This website uses cookies to improve your user experience and to provide you with advertisements that are relevant to your interests. By continuing to browse the site you are agreeing to our use of cookies.Ok